After delays due to coronavirus, Supreme Court begins historic session with live broadcast of teleconference arguments. 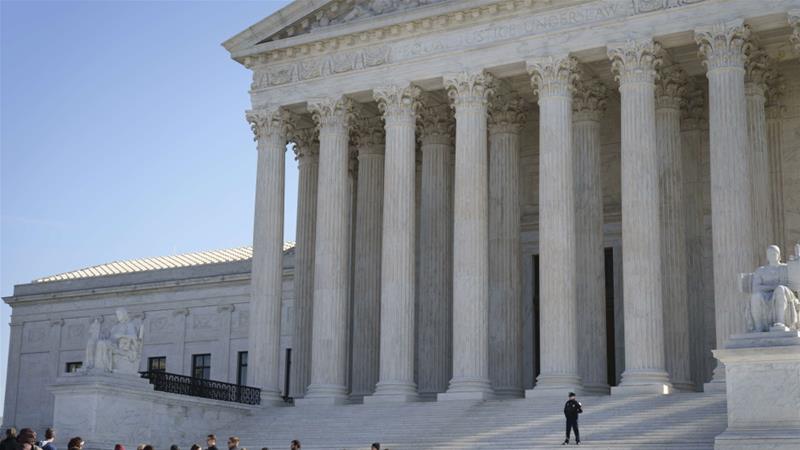 The United States Supreme Court made history on Monday as it conducted arguments via a conference call and for the first time in its history allowed the public to listen in.

The move comes as justices return to session following delays due to the coronavirus pandemic, and marks a major shift in the court’s approach to digital transparency that has left advocates hopeful.

The voices of the nine justices are being streamed on public access channel C-SPAN. This marks the first opportunity that the general people can experience court proceedings in real time.

“I think it would be a benefit for the American public,” said Gabe Roth, executive director of Fix The Court, a nonpartisan group that advocates for transparency in the court.

Considering the partisan nature of politics, Roth said seeing the nine justices, who come from different sides of the US political spectrum, “coming to a problem collectively to try to solve it” would “make the public see the court more positively”.

The top court has long bucked technological advances pushed by transparency advocates like Fix The Court.

It was not until 2000, the year the Supreme Court played an essential role in deciding the election of then-candidate George W Bush, who lost the popular vote to Vice President Al Gore, that the court allowed the same-day release of the audio for oral arguments.

Even after that development in 2000, the audio for most oral arguments was released at the start of the next session, which meant up to a year of waiting.

This changed in 2010, when audio started to be released the week after arguments were made.

Electronic filing for court documents came in 2017, though paper filing was still commonly required. It was not until an April 15 order that the court relaxed (PDF) these rules – again due to the coronavirus.

While live audio streaming is a major development for the court, it does not mean it will adopt live video.

The court has long resisted any calls to introduce cameras into the court.

Justice Stephen Breyer said in a 2015 interview that cameras could cause undue bias among the public regarding laws that affect more than 300 million US citizens.

Human beings “relate to people they see” while oral arguments account for only 5 percent of deciding a case,” Breyer said. “Will they understand the whole story?”

But Roth still believes a more visible court is the right path forward, and hopes it lasts.

The first Supreme Court case ever streamed live dealt with patents. The court will decide whether adding “.com” to an otherwise generic business term results in a protectable trademark in US Patent and Trademark Office v Booking.com.

While not the most exciting case, it could give the court and its technical team a chance to handle any technical difficulties before delving into larger issues surrounding religious exemptions, US jurisdiction on Native American lands and President Donald Trump’s tax returns.

On Tuesday, the court will hear arguments – for the second time – about whether the federal government can require foreign affiliates of US-based NGOs receiving federal funds to have policies expressly opposing prostitution and sex trafficking in United States Agency for International Development v Alliance for Open Society International, Inc.

The court decided in 2013 that the requirement violated the First Amendment, which protects freedom of expression.

The court will start on Wednesday with consolidated cases, Little Sisters of the Poor v Pennsylvania and Donald J Trump v Pennsylvania, which question the legality of the Trump administration’s 2019 rule broadening conscientious objection exemptions to the Affordable Care Act regarding abortion, contraception, assisted suicide, advance directives and other types of medical care.

The exemption allows employers with religious objections to refuse to provide such care.

The next case, McGirt v Oklahoma, comes on May 11. The petitioner, Jimmy McGirt, was convicted of sex crimes against a child in an Oklahoma court in 1996.

However, McGirt is an enrolled member of the Muscogee Creek Nation and committed the offence inside historic Creek nation boundaries.

McGirt argues his trial should have been in federal and not state court, as guaranteed under the Indian Major Crimes Act. The court challenges state jurisdiction over Native Americans, and could cause the federal government to defer to tribal governments when deciding sentences for Indigenous convicts.

The court heard a similar case in 2018, but did not offer a judgement.

Later that day, the court will hear consolidated cases Our Lady of Guadalupe School v Morrissey-Berru and St James School v Biel, about whether courts can hear employee discrimination cases brought by teachers at Catholic schools, considering religious protections guaranteed by the US Constitution.

Trump’s taxes and the next election

May 12 will start what are arguably the biggest cases of the session: those on Trump’s tax returns.

The first consolidated cases, Trump v Mazars and Trump v Deutsche Bank AG will feature arguments about whether congressional committees have the authority to issue subpoenas to the president’s accountant and creditors for financial records belonging to the president and his business entities, according to SCOTUS Blog, a website that features writing from lawyers, law professors and others on the Supreme Court.

Trump’s legal team argues in its brief to the Supreme Court that “something is amiss” as there is no precedent for the subpoenas, which in his view exceed the powers of the issuing committees.

Lower courts have denied his motion to block the subpoenas, either in full or in part.

Trump v Vance, to be heard later that day, is a similar case but regards whether county prosecutors can subpoena financial documents from the president as part of a larger criminal investigation being heard in front of a grand jury under a state’s jurisdiction.

The case involves questions of federal vs state authority, as well as the high bar to which criminal investigations against a sitting president must be judged.

Finally, the court will hear arguments on May 13 about the constitutionality of “faithless elector” laws in Chiafolo v Washington and Colorado Department of State v Baca.

These “winner-take-all” laws require that state electors in the Electoral College, which has the final say in presidential elections, must vote for the candidate that won their state. Until 2016, their votes were largely a formality.

The petitioners are electors from Washington state who voted for Colin Powell in the 2016 electoral college, instead of Hillary Clinton, as was mandated since she won the popular vote in the state.

Washington imposed a fine, which the electors say violated the First Amendment.

If the Supreme Court decides to “unbind” electors from the vote of their state a few months before a presidential election, there could be chaos, according to Paul Smith and Adav Noti from the Campaign Legal Center, which advocates for participation in the democratic process and filed a friend of the court brief on the side of Washington.

A number of issues surround the electors, including the fact that they are not subject to anti-corruption laws.

Smith and Noti argued on SCOTUS Blog that the 538 electors could theoretically take unlimited contributions from national and foreign interests before swinging an election, as there will not be enough time to update corruption laws, throwing US democracy into question.

“If voters believe their ‘legitimate votes’ are irrelevant because the election will actually be decided later by individuals they have never heard of and certainly do not intend to vote for, the voters will feel – and will in fact be – disenfranchised,” they wrote.

It is unclear if the new livestream audio format will continue after the coronavirus pandemic. The court may still forgo in-person hearings when it is scheduled to return in October. The majority of justices on the court are more than the age of 65, making them more vulnerable to complications of the coronavirus. Two – Justice Ruth Bader Ginsberg and Justice Breyer – are above 80.