Home » Americas » Forced Out by Deadly California Fires, Then Trapped in Traffic

PARADISE, Calif. — Thousands of residents in the wooded town of Paradise did what they were told to do when the morning skies turned dark and an inferno raged across the hills: They got in their cars and fled. What happened next was the vehicular equivalent of a stampede, packing the roads to a standstill.

In the hours after the devastating wildfire broke out around Paradise on Thursday morning, tree-lined streets in the town swiftly became tunnels of fire, blocked by fallen power lines and burning timber. Frantic residents, encircled by choking dense smoke and swirling embers, ran out of gas and ditched their cars. Fire crews struggling to reach the town used giant earthmovers to plow abandoned vehicles off the road as if they were snowdrifts after a blizzard.

Of the 23 people known on Sunday to have been killed by the fire in Paradise, six died in their cars.

Farther south near Los Angeles, where another vast fire continued its destruction, more than 250,000 people have been ordered to leave their homes, a mass evacuation that likewise was all but halted at times by snarled roads. The Los Angeles County Sheriff’s Department said that two bodies had been found severely burned inside a stopped vehicle on a long, narrow driveway in Malibu.

Again and again in California’s battle with wildfires, roads have emerged as a major vulnerability for those escaping.

There was only one way out of Paradise for residents fleeing the fire, the four-lane road known as Skyway, which quickly became paralyzed by traffic, a situation similar to what residents of Malibu endured along the Pacific Coast Highway, another choke point.

Lauri Kester, a caretaker for the elderly in Paradise, said it had taken an hour to drive three miles on Thursday as the firestorm ripped through the town. 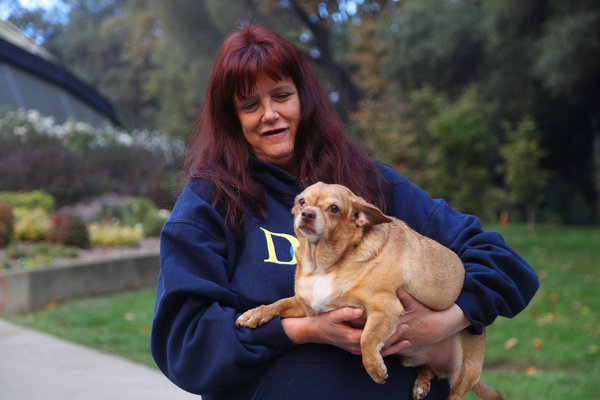 “There were cars behind, cars in front and fire on both sides,” Ms. Kester said. A police officer running past her told her to abandon her Subaru.

So Ms. Kester, 52, ran down the road with her dog, Biscuit, in her arms. “I thought, ‘This is not how I want to die,’” Ms. Kester recalled on Sunday morning in Chico, Calif., smoking a cigarette on a folding chair outside a gold-domed church sheltering refugees. “It was hot, it was smoky and — this sounds like such an exaggeration, but — it was apocalyptic.”

California was still battling three major fires on Sunday: the so-called Camp fire, which exploded across 105,000 acres and is still raging in the forests near Paradise, and two fires west of Los Angeles. With Santa Ana winds gusting through the hills of Malibu and toward the coast, firefighters battling the Woolsey Fire in Southern California were preparing for it to get worse over the next few days. The Hill Fire, which is farther inland, was about 70 percent contained.

During a drive north on Sunday on the Pacific Coast Highway, which is closed in both directions to nonemergency personnel, the shimmering waters of the Pacific could be seen on one side, and on the other, steep cliffs and rocky hillsides with patches of black, charred earth. In other sections of the highway, brush was scorched on both sides and power lines and burned fence posts were down where just a couple of days ago the fire had jumped the roadway and run up to the beach.

As wildfires have grown in size and ferocity in recent years, identifying escape routes has become a priority.

The mayor of Paradise, Jody Jones, is a traffic specialist who spent years working as a regional manager for the California Department of Transportation, known as Caltrans.

After a wildfire tore through the area in 2008, Paradise put together a detailed plan, hoping to make emergency evacuations swift and orderly, with residents leaving according to their neighborhoods.

“We actually practiced this about a year and a half ago,” Ms. Jones said.

Yet on Thursday morning, when the fire approached with intense speed, any idea of an orderly evacuation fell apart.

“I don’t know that you could build the infrastructure to evacuate an entire town that quickly,” Ms. Jones said. “I just don’t know if that’s possible.”

Ms. Jones lives in the northern end of Paradise, and her own escape was a transportation planner’s nightmare: The drive to the city of Chico, which normally takes 20 minutes, was a four-hour crawl to safety, with flames engulfing both sides of the road.

And it’s not just Paradise that is in this situation, the mayor said. Many California towns, especially those near wildlands, are vulnerable.

“It could happen anywhere,” she said. “It seems like we have more natural disasters now that come at us quicker and affect large numbers of people at the same time. There’s no easy solution for it.”

Firefighters said they were dumbstruck by the speed of the fire.

“Everything was igniting at once,” said Scott McLean, the deputy chief of the California Department of Forestry and Fire Protection. “Swirling winds, swirling embers, fire on both sides of the roads. I lost count how many times I ran over downed power lines.”

“These are signs that the fires we are dealing with are so ferocious,” Mr. McLean said.

In Paradise, the evacuation was further complicated by the large number of older residents. Paradise is a popular retirement destination, and many had a more difficult time getting out.

Thomas and Gloria Selby, a couple in their eighties, rushed to pack up their dog, medicines for a grandson who suffers from seizures, and their prized belongings, including Mrs. Selby’s sewing machine. Yet as soon as they left their home, they found gridlock.

The traffic continued as they made their way through Paradise. At times, they stalled in traffic as flames menaced and other motorists panicked and abandoned their vehicles to try to escape on foot. Propane tanks exploding around them added to the atmosphere of doom.

“It sounded like a war,” said Mrs. Selby. “It was very scary, very intense.”

The evacuation was also complicated by the topography of the town. In the foothills of the Sierra Nevada, Paradise’s main connection to the outside world is Skyway, a highway that runs along a ridge, making escape even more dangerous.

The Paradise police chief, Eric Reinbold, who lost his home in the blaze, said the terrain and traffic flow had played a role in a number of the deaths.

Four people were found dead in their cars in a neighborhood of Paradise with steep terrain.

“The particular area is out on a finger of a ridge, where there is a canyon on both sides,” said Chief Reinbold, 35. “It’s dense brush, dense trees. It’s one way in, one way out, so it’s very possible that the fire was just so intense that there was no way of avoiding that when trying to leave.”

The Butte County Sheriff’s Office said Sunday that it had brought in a truck where family members of those missing in the Camp Fire could provide DNA samples to identify the remains of those killed in the blaze.

On Sunday, Paradise was ringed with miles of scorched earth. Inside the town were the charred remains of gas stations, hair salons and tattoo parlors. The Paradise Inn was mostly debris, save for a sign, and one restaurant was recognizable only by the arrangement of metal-frame chairs left standing. Hundreds of abandoned cars filled parking lots and the sides of the road.

As of Sunday morning, the authorities had confirmed 23 deaths, making the Camp Fire the third-deadliest in state history. The deadliest was the Griffith Park fire, which killed 29 people in 1933.

But Kory L. Honea, the sheriff of Butte County, said at a community meeting on Saturday night that the number could grow, as teams were scouring the areas they could reach — some were still inaccessible because of fire danger — and gathering more human remains.

“Unfortunately, our work in this area isn’t done,” Mr. Honea said. “We recognize how important it is for you to know or learn the fate of loved ones who are missing.”

Mr. Honea said at the meeting that the region was still reeling from a high number of missing-person reports. The Sheriff’s Office had received 120 reports and, after searching local shelters, had been able to reunite 70 people with family members and friends.

The two bodies found in a car accounted for the only deaths so far linked to the fires in Southern California, but many people remain missing.

Harris Miller, 83, standing in the parking lot of the upscale Vintage Grocers in Malibu, its doors shuttered, said he had defied the evacuation order and stayed behind. “I survived all this,” he said. “But there’s no electricity. And there’s no plan for electricity for a week, they say.”

Much of the damage from the fire in Malibu is in Point Dume, a section of the coast that has typically been safe because it is on the ocean side of the Pacific Coast Highway. But this time, the fire jumped the road and tore through the canyons, destroying a number of homes. “Some big beautiful homes that have been there forever,” Mr. Miller said.

In a parking lot in Point Dume on Sunday was the charred husk of a 1982 Ford pickup truck, with an American flag draped over it. Frank Kerze, 58, lost his truck, but he saved his home, he said, because he stayed behind and fought the fire with “no water pressure” but “a couple of garden hoses.”

“I made it, dude, because I stayed,” he said, jubilant as he drove around in a golf cart.

Many of his neighbors were not as lucky. A number of homes on Dume Drive burned to the ground, some of them upscale mansions that would be expensive anywhere, others homes that elsewhere would be ordinary but in Malibu had cost millions. The fire was indiscriminate, torching some homes and leaving others, next door or just across the street, intact.

Jed St. Henry, a 62-year-old construction contractor whose home survived, said the fire had been “incomparable to any fire I have lived through on this side of Malibu.”

‘We Banged on the Trunk of His Cab and Reprimanded Him’