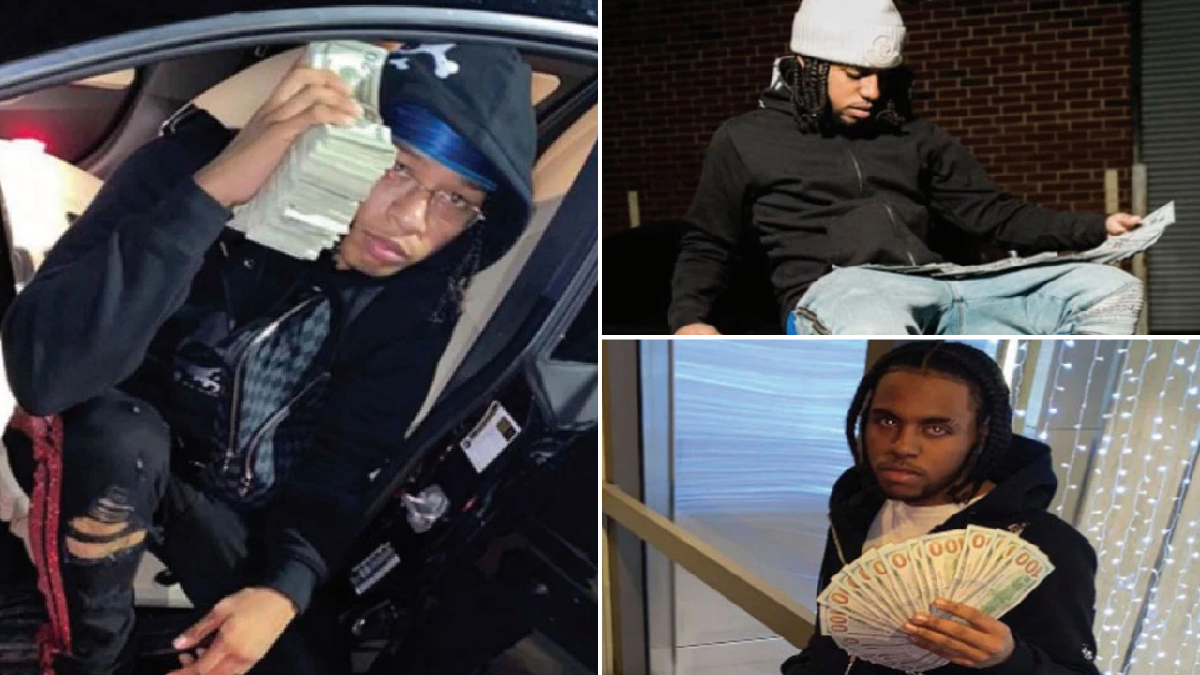 A group of eight men are accused of fraudulently claiming a combined $2million in Covid relief funds and posting pictures of themselves with their ill-gotten fortune online.

The alleged fraudsters, from Brooklyn, New York, stole other people’s identities to submit unemployment claims through a benefits system that was set up to support those in need throughout the pandemic, prosecutors said on Tuesday.

Six of the eight defendants – ranging in age from 18 to 25 – have already been charged by a Brooklyn federal court with conspiracy to commit access-device fraud, documents show.

Two of the suspects however, Armani Miller, 24, and Johan Santos, 19, are still at large and are wanted by detectives.

Four of the alleged thieves flaunted their cash on social media, posting crude pictures of themselves with large piles of cash, according to the court documents.

Photos of the suspects provided by the US Department of Justice show the men flashing the cash while revealing their identities.

According to investigators, the men stole personal information from people in the assistance program to obtain unemployment benefits. Most of the benefits acquired were funded by the ‘Covid-19 pandemic assistance’ programs.

The men allegedly funneled cash that was meant for others in the program into their own personal bank accounts, then withdrew the money at cash machines in the New York boroughs of Brooklyn and Queens.

When they were caught by police, they were found with a combined total of more than 100 Key Bank debit cards in other people’s names that they had used to make large withdrawals. Surveillance images from various banks show the men withdrawing allegedly stolen cash, the court documents state.

The suspects apparently used the same addresses and phone numbers for multiple false claims, leading to the authorities becoming suspicious, the prosecutors said.

The scams began in June 2020 and continued until April this year. All eight defendants, including the two are not yet under arrest, are charged with conspiracy to commit access-device fraud, prosecutors said.

New York state labor commissioner, Roberta Reardon, said: ‘There is never an excuse to knowingly commit fraud and steal from a system that was designed to help New Yorkers in a time of need.

‘However, it’s even more despicable when these thieves steal a lifeline from New Yorkers in the midst of a public-health pandemic.

‘We have no tolerance for criminals, and if you break the law, you will be held accountable.’

US Postal Service inspector-in-charge, Philip Bartlett, added: ‘Unfortunately, as the government rolled out various CARES Act programs, fraudsters were at the ready to take full advantage of these programs through a variety of fraud schemes, ripping off the American public of millions in taxpayer dollars and clogging the system for those who honestly are in need.’