One week until the end of a bitterly contested mayoral primary, and a day before the race’s final debate, Kathryn Garcia and Maya D. Wiley both tried on Tuesday to establish themselves as voters’ best alternative to the race’s apparent leader, Eric Adams.

“I’ve been a public servant, and that means that I have been serving the people of New York City,” Ms. Garcia, a former sanitation commissioner, said in an interview at noon at her campaign office in Brooklyn. “And that’s what we need right now, not a politician who has curried favors.”

“New York wants a different kind of leadership,” Ms. Wiley, a former counsel to Mayor Bill de Blasio, said in front of the Brooklyn Public Library’s central location an hour later. “No tinkering around the edges of problems that we have failed to solve, but actually stepping up and being bold and transformational.”

The messages echoed the pitches the two candidates, both seeking to be the first woman elected mayor of New York, have been making to voters for months. But they have taken on a new urgency as time to court supporters is running out and polls show more city residents coalescing around Mr. Adams, the Brooklyn borough president.

A poll released on Monday by the Marist Institute for Public Opinion found that Mr. Adams had the support of 24 percent of likely primary voters. Behind him, nearly neck and neck, were Ms. Garcia, at 17 percent, and Ms. Wiley, at 15 percent. (The poll had a margin of error of 3.8 percent.)

At a campaign event, Mr. Adams exhibited the confidence of a front-runner heading into the final stretch.

“The more New Yorkers hear my story and my vision, they just seem to like me,” he said, speaking at a rally with Mexican American leaders in Brooklyn’s Sunset Park neighborhood.

But that same survey that showed strength for Mr. Adams also reflected gains for Ms. Garcia, whose campaign has surged after major newspaper endorsements, and for Ms. Wiley, who has endeavored to consolidate support from left-leaning voters as other candidates have stumbled.

It also showed some overlap in their bases: Among the voters who ranked Ms. Garcia as their first choice, Ms. Wiley was the most common second-choice pick. For Ms. Wiley’s supporters, the most popular No. 2 was Ms. Garcia.

Yet for weeks, as both candidates have tried to chip away at their rivals’ bases, they have largely stayed away from attacking — or even mentioning — each other.

They have also refrained from making statements of outright support for each other, even in an election using a ranked-choice system where being a voter’s second choice could theoretically help a candidate win. 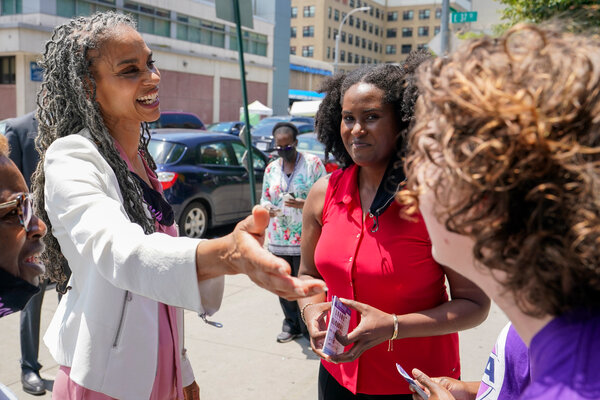 As the campaign enters its final stretch, Ms. Garcia, one of the more moderate candidates in the primary field, has sought to woo voters across the broad political spectrum of New York’s Democrats.

At times, she has seemed to try to thread the needle between progressive voters and centrist ones on a range of issues, particularly public safety.

On Monday in Lower Manhattan, she told progressive voters — one of whom complained that she “comes across as a defender of the police” — that she would rein in police brutality and, if necessary, fire defiant police officials.

That afternoon, in southern Brooklyn, she took a slightly different tone with small-business owners clamoring for more police officers on patrol. “I’ve been very clear,” she said “Everyone needs to be safe and secure, regardless of where they live or the color of their skin. I lived through the ’70s and ’80s in New York, and I don’t want to go back.”

On Tuesday, Ms. Garcia sought to frame her pragmatic approach to city government — one that focuses on day-to-day operations over ideology — as a left-leaning stance. When asked about her stance on climate change, she said that “there is literally nothing more progressive than getting it done, the really hard work.”

She has frequently made personal appeals to voters through canvassing or small events. On Tuesday, she held a round-table discussion with young people about how to improve the city’s foster care system.

The issue is far from the center of the mayoral campaign, but it gave Ms. Garcia — who was adopted and whose sister was in foster care for seven years — a chance to connect with voters on an emotional level while highlighting her desire to cut through entrenched bureaucratic tangles.

“This is a very personal issue,” Ms. Garcia said. “But also, this is the type of thing where we know it’s not working. And there’s another way of thinking about it that works so much better.”

Elsewhere on the campaign trail, Ms. Wiley was again trying to unite progressives behind her, announcing a mutual endorsement with Crystal Hudson, a City Council candidate in central Brooklyn who is seeking to be the first out gay Black woman on the council.

“There is a real choice for New Yorkers on the ballot,” Ms. Wiley said. “We, in an historic crisis, have historic choices. And one of them is to make history by, in fact, voting for the most qualified to lead, in a historic crisis.”

Ms. Wiley focused on affordable housing, which has been a major issue in Ms. Hudson’s race. She reaffirmed her commitment to spending $2 billion to repair and expand public housing and to expanding housing subsidies to cover more New Yorkers.

“This isn’t a crisis,” Ms. Wiley said of the city’s housing crunch. “This is an impending catastrophe.”

A Utah School Made Black History Month Optional. Then It Reversed Itself.