As the mayoral campaign of Dianne Morales, a progressive champion, continues to disintegrate around her, a moderate has ascended in the polls. Kathryn Garcia, the former sanitation commissioner, continued to gain momentum, and even some negative attention from a rival who once lavished praise on her.

The polling in the mayor’s race remains spare and potentially unreliable, but if it is to be believed, three of the front-runners in the race — Andrew Yang, the former presidential candidate; Eric Adams, the Brooklyn borough president; and now Ms. Garcia — are moderate Democrats, not progressives.

Garcia gets a super PAC

It is the new, must-have accessory for any serious New York mayoral candidate, and Ms. Garcia is finally getting one, too — a super PAC.

Jon Jones and Ronnie Cho, two veterans of Barack Obama’s first presidential campaign, are putting together an independent expenditure committee in an effort to inundate New Yorkers with pro-Garcia advertising in the final weeks of the mayoral primary.

Their move leaves just one candidate out of the top eight without a super PAC supporting her: Ms. Morales. Recent polling indicates Ms. Garcia has entered the race’s top tier of candidates, alongside Mr. Yang and Mr. Adams, both of whom already have well-funded super PACs behind them.

This is the first New York City mayor’s race to see this level of outside spending. The onslaught of barely regulated money comes at the same time that the city is implementing its new, more generous matching funds system, which is designed to reward small-dollar donations from local residents. Critics worry the super PAC spending threatens the efficacy of that public financing system.

Mr. Jones and Mr. Cho say they already have financial commitments worth six figures, and are aiming to ultimately raise more than $1 million. They declined to name their donors.

“The city is broke and we’ve got big economic, cultural and operational challenges in N.Y.C.,” they said in a joint statement. “It’s not the time for big rhetoric and personalities, undeliverable promises or idealistic dogma. Simply put, we need someone who can get the job done.”

For months, Mr. Yang has parried criticism of his lack of experience in government with a promise to surround himself, once in office, with the most skilled government hands. Consistently, he has named Ms. Garcia among them.

“She is a disciplined operator with great experience and I hope that she’s a partner in my administration,” Mr. Yang said in a recent video interview with The New York Times. “Kathryn, if you’re watching this, Kathryn, let’s team up. We’re going to do it, got to do it for the city.”

At the time, Ms. Garcia did not seem to pose a threat to Mr. Yang. All it took for him to change his tune were a couple of polls. 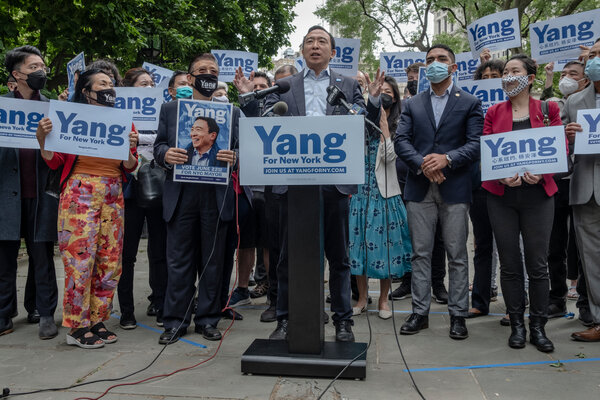 And suddenly, Mr. Yang was singing a different song.

“We talk about her experience as the head of the Department of Sanitation,” Mr. Yang said on WNYC’s “The Brian Lehrer Show” on Wednesday. “Right now, New Yorkers complain to me just about every day about the piles of trash that we’re seeing around us that get higher and higher.”

Ms. Garcia left the sanitation department in September, and in her resignation letter she criticized the mayor for cutting the department’s budget.

Reached over the weekend, she said she didn’t find the attacks surprising.

“They’re looking at the polls and seeing my numbers rise,” Ms. Garcia said in a text message.

Asked why Mr. Yang had a change of heart, his senior adviser Eric Soufer said, “Our city needs a change at the top, not a de Blasio third term.”

Morales’s staffers wage a protest against her

On Friday morning, the wind at Bryant Park carried the regular scents of grass and food — and palo santo. The newly unionized members of Ms. Morales’s mayoral campaign had gathered near the park’s lawn, crafting signs, practicing chants and burning pieces of the aromatic wood, readying for a march to Ms. Morales’s Manhattan headquarters.

The workers moved to unionize last week following the resignation of two high-level staff members, among them the campaign manager, and the termination of six more, including four members involved in union efforts. Following the dismissals, organizers began a work stoppage, calling for the reinstatement of the staff members.

The tumult, just weeks before the primary, has caught Ms. Morales in a bind, trying to balance running a mayoral campaign — a stressful, chaotic undertaking under any circumstances — and living up to the progressive ideals that she and her staff have put at the center of her race.

“It’s a beautiful and messy thing,” Ms. Morales said of the unionization efforts during an interview with NY1 Thursday night, calling it a “reflection” of her “transformative” campaign.

It wasn’t enough for her increasingly skeptical staff. The next morning about 40 of her employees gathered on the sidewalk outside her Midtown office. People encouraged each other to mind sidewalk violations, in case a minor infraction gave the campaign leaders inside an excuse to call the police.

“I don’t put it past the campaign office that we’re in front of to call the cops,” said Nia Evans, a union organizer.

Details emerge of ‘US spy extracted from Russia’

How NASA Sold the Science and Glamour of Space Travel