Home » Americas » ‘Gentle Steering of the Ship’: How Keith Ellison Led the Prosecution of Chauvin

MINNEAPOLIS — As a young civil rights lawyer almost 20 years ago, Keith Ellison took on a client who accused two Minneapolis police officers of sodomizing him with a toilet plunger.

The case had echoes of an earlier police brutality case in New York, in which four officers were sent to prison in connection with the sexual assault of Abner Louima, who was attacked with a broken broom handle in a precinct bathroom.

The officers in the case involving Mr. Ellison’s client, Stephen Porter, were ultimately cleared by an F.B.I. investigation. But Mr. Ellison achieved a very different outcome on Tuesday regarding another Black man’s encounter with the police, when Derek Chauvin, the white former officer charged with killing George Floyd, was convicted of two counts of murder as well as manslaughter.

Mr. Ellison, 57, who grew up in Detroit and moved to Minnesota to attend law school, became the first Muslim elected to Congress in 2006 and a rising star of the progressive wing of the Democratic Party. He served in Washington for 12 years before abandoning a safe seat to run for attorney general in Minnesota in 2018, becoming the first Black person elected to statewide office. A little more than a year after taking office as attorney general, he took charge of the Chauvin case.

Mr. Ellison has long been an important voice on criminal justice issues in Minneapolis. More than a decade before he took on the Porter case, he represented the mother of Tycel Nelson, who was fatally shot by a Minneapolis police officer, winning a civil settlement. Mr. Ellison, who once led the Legal Rights Center, which offers defense counsel to indigent defendants, was also at the forefront of the racial justice movement here, and an early proponent of mediation work with street gangs and finding community-based solutions for public safety beyond traditional policing.

In prosecuting the Chauvin case, Mr. Ellison assembled a team of outside lawyers to handle motions and the presentation of evidence and testimony, and the outcome was a rarity in America: Very few prosecutors have ever convicted a police officer of murder for killing on the job. 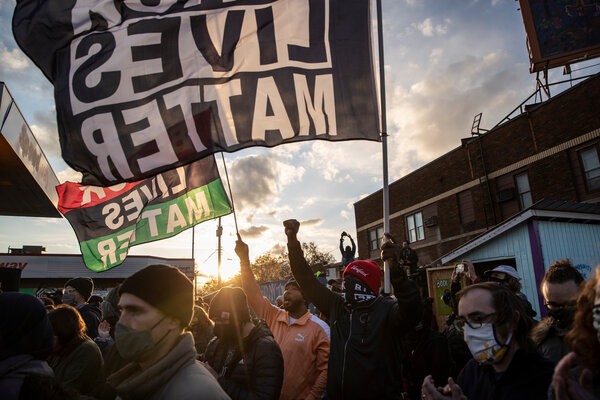 One key to the prosecution’s success, legal experts said, was that over the last several weeks of the trial, the “blue wall of silence” among the police — which once stood tall when a fellow officer was accused of a crime — appeared to crumble. One officer after another, including the police chief, took the witness stand to disavow and condemn Mr. Chauvin.

While Mr. Ellison did not speak in court, he was there most days on the prosecution side of the room, wearing a suit and often scrolling through the news feed on his phone. He was deeply involved in just about every aspect of the case, from preparing witnesses to weighing in on jury selection, said Neal Katyal, a former acting solicitor general during the Obama administration who was part of the prosecution team.

Mr. Katyal said he reached out to offer help to Mr. Ellison a few days after Mr. Floyd was killed last Memorial Day.

He described Mr. Ellison’s role in the prosecution as a “gentle steering of the ship” that nevertheless got into the weeds at times, sending back line edits of footnotes in legal briefs Mr. Katyal had written for the case.

Through the long months of trial preparation, Mr. Katyal said, a constant message from Mr. Ellison was that their work was part of the larger arc of America’s story of racial injustice. “He viscerally felt the pain of what the community has been through,” Mr. Katyal said, referring to Mr. Ellison’s earlier days as a civil rights lawyer in Minneapolis working on police misconduct cases.

Once, in the lead-up to the trial, Mr. Ellison invited the mother of Eric Garner, who was killed in 2014 by a New York police officer who was never charged, to join the prosecution team’s daily meeting. Her presence, Mr. Katyal said, highlighted how Mr. Ellison saw the Chauvin case as not merely about the death of Mr. Floyd, but also as an effort to achieve a measure of justice for all the Black families who have lost loved ones to police violence but never saw a courtroom.

“It was so spellbinding to listen to her and say you’re giving me something my son and me never got, a day in court,” Mr. Katyal said.

As a Muslim politician, Mr. Ellison has often fought off charges of anti-Semitism over his support of the Palestinians, and when he ran for attorney general he faced attacks from some who suggested falsely that he favored imposing Shariah law. “He faced a great deal to be where he is,” said Jaylani Hussein, the executive director of the Minnesota chapter of the Council on American-Islamic Relations.

Still, while Mr. Hussein called the Chauvin conviction a landmark, he was reluctant to give Mr. Ellison too much credit because he said the evidence and public awareness of the case, especially from the harrowing bystander video, was so overwhelming that anything less than a conviction would have been a stark failure.

After the verdict in the Chauvin case was read on Tuesday afternoon, Mr. Ellison, who in the coming months will prosecute three other officers charged in Mr. Floyd’s death who are scheduled to go on trial in August, was measured in his remarks. He said the outcome was simply a starting point that he hoped would lead to a wide-scale reckoning with police abuses against people of color.

“I would not call today’s verdict justice, however,” Mr. Ellison said. “Because justice implies there is restoration. But it is accountability, which is the first step toward justice.”

During a meeting on Tuesday night with his team, Mr. Ellison noted that he had spent some of the day with the Rev. Jesse Jackson, and that Mr. Jackson had been with the Rev. Dr. Martin Luther King Jr. on the day he died in Memphis in 1968. Mr. Katyal said that Mr. Ellison “drew a link” in the meeting between what the prosecutors did over the last year in achieving justice for Mr. Floyd and the work of Dr. King and the civil rights activists of the 1960s.

In his public remarks on Tuesday, Mr. Ellison invoked the Kerner Commission, a group appointed by President Lyndon B. Johnson in 1967 to investigate the causes of uprisings over racial injustice in American cities.

“Here we are in 2021 still addressing the same problem,” he said, before reciting the names of other Black people killed by the police, including Eric Garner, Oscar Grant, Philando Castile and Daunte Wright, who was killed by an officer in the Minneapolis suburb of Brooklyn Center during the Chauvin trial.

“This has to end,” Mr. Ellison continued. “We need true justice. That’s not one case. That is a social transformation that says that nobody is beneath the law and no one is above it.”

An Alligator Captivates Chicago from Deep Inside a West Side Lagoon