Home » Americas » George Floyd death: Biden brands Trump a ‘narcissist’ and says he is ‘part of the problem’

Joe Biden has lashed out at Donald Trump – claiming the president is “consumed with his blinding ego” and exacerbating unrest in the US.

The Democratic candidate said Mr Trump’s “narcissism has become more important than the nation that he leads”, and added “the moment has come” to deal with systemic racism in the country.

Mr Biden was speaking out after police drove back peaceful protesters outside the White House so the president could “stage a photo op” at a church. 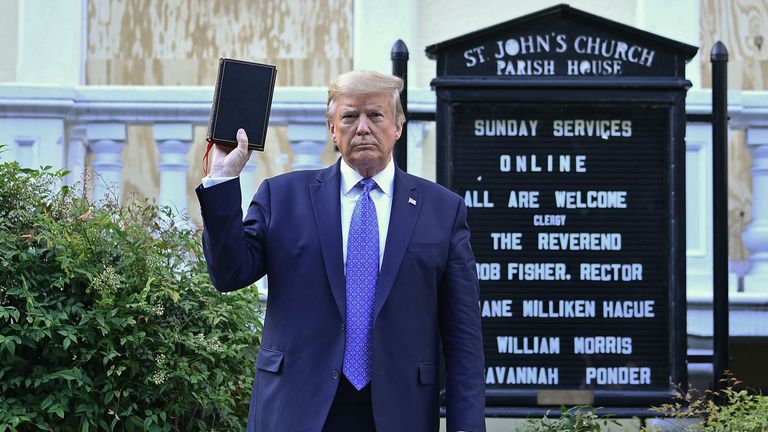 Demonstrators were met with tear gas and flash grenades as they were dispersed before Mr Trump walked to the nearby St John’s, which was damaged in Sunday’s violence, and briefly posed with a Bible.

Mr Biden said: “The president held up a Bible. I just wished he opened it once in a while instead of brandishing it.”

The bishop of the Episcopal Diocese of Washington, Reverend Mariann Budde, whose diocese St John’s belongs to, also said she was “outraged”, saying she was given no warning about Mr Trump’s visit on Monday, and no permission was sought for the photo opportunity.

Mr Biden said the president was “more interested in power than in principle”.

The former vice president was addressing the recent civil unrest which has swept across the US following the death of George Floyd.

He died in police custody after an officer put his knee on his neck for nine minutes, with Mr Floyd saying: “I can’t breathe.”

He said the country was “crying out for leadership that can unite us” – and that he, not Mr Trump, could provide it.

He said: “I won’t traffic in fear and division. I won’t fan the flames of hate. I will seek to heal the racial wounds that have long plagued this country – not use them for political gain.

“I’ll do my job and take responsibility. I won’t blame others. I’ll never forget that the job isn’t about me, it’s about you, it’s about us.”

Mr Biden called on Congress to act “this month” on measures to bring in “real police reform”.

During his half-hour speech, Mr Biden said: “We can’t leave this moment thinking that we can once again turn away and do nothing. We can’t do that this time. We just can’t.”

It comes as six police officers in Atlanta were charged after a video showed authorities pulling a couple in their early 20s from a car during protests over Mr Floyd’s death.

Messiah Young and his girlfriend Taniyah Pilgrim were dragged from the vehicle while they were caught in traffic on Saturday night.

Two officers, Investigator Ivory Streeter and Investigator Mark Gardner, were sacked on Sunday and have been charged with aggravated assault, along with two others.

A fifth officer has been charged with aggravated battery and a sixth with criminal damage.

Mr Biden urged senate majority leader Mitch McConnell to pass legislation that will address the concerns of protesters on police reform and a bill that outlaws chokeholds.

“The president of the United States must be part of the solution, not the problem,” Mr Biden said.

“This president today is part of the problem and accelerates it.”

‘It Was Not My Fault’: Women in Mexico Fight Back Against Violence