He was the only witness called to give evidence on day 13 of the trial.

The forensic pathologist, serving as an expert witness, outlined to the jury his reading of all of the evidence in the case and his conclusion that officer Chauvin’s knee was not responsible for George Floyd’s death.

He told the court that Mr Floyd’s heart disease and drug use were the primary cause. He added that the stress of his arrest and the release of adrenaline from a tumour in his abdomen contributed, as did possible carbon monoxide from the police car exhaust as he was restrained nearby. 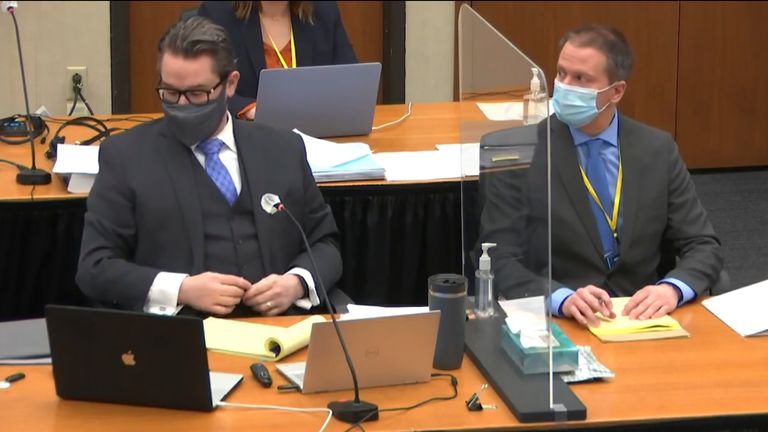 It was a very different conclusion from that of the medical examiner who performed the post-mortem examination on Mr Floyd. Dr Andrew Baker told the court on Friday that the restraint of Mr Floyd was his cause of death.

On cross-examination by the prosecution though, Dr Fowler had to concede that the evidence did not support some of his conclusions.

He accepted there was no carbon monoxide found in Mr Floyd’s system after his death. The police car was a hybrid and he was unable to say that for certain that the engine was running. He made his judgement because of liquid dripping from the exhaust pipe.

He also accepted that a white object he identified in Mr Floyd’s mouth at the time of this arrest could have been the gum he was seen on cctv chewing shortly before.

Perhaps most significantly of all, he accepted that, whatever caused Mr Floyd to stop breathing and cease his pulse, immediate medical treatment at the moment could have saved his life. The prosecution alleges that officer Chauvin should have recognised the same.

US analyst arrested for leaking intel to reporters

US launches air raids in Iraq after deadly rocket attack