Home » Americas » George Floyd trial: What happened and when will Derek Chauvin get sentenced? 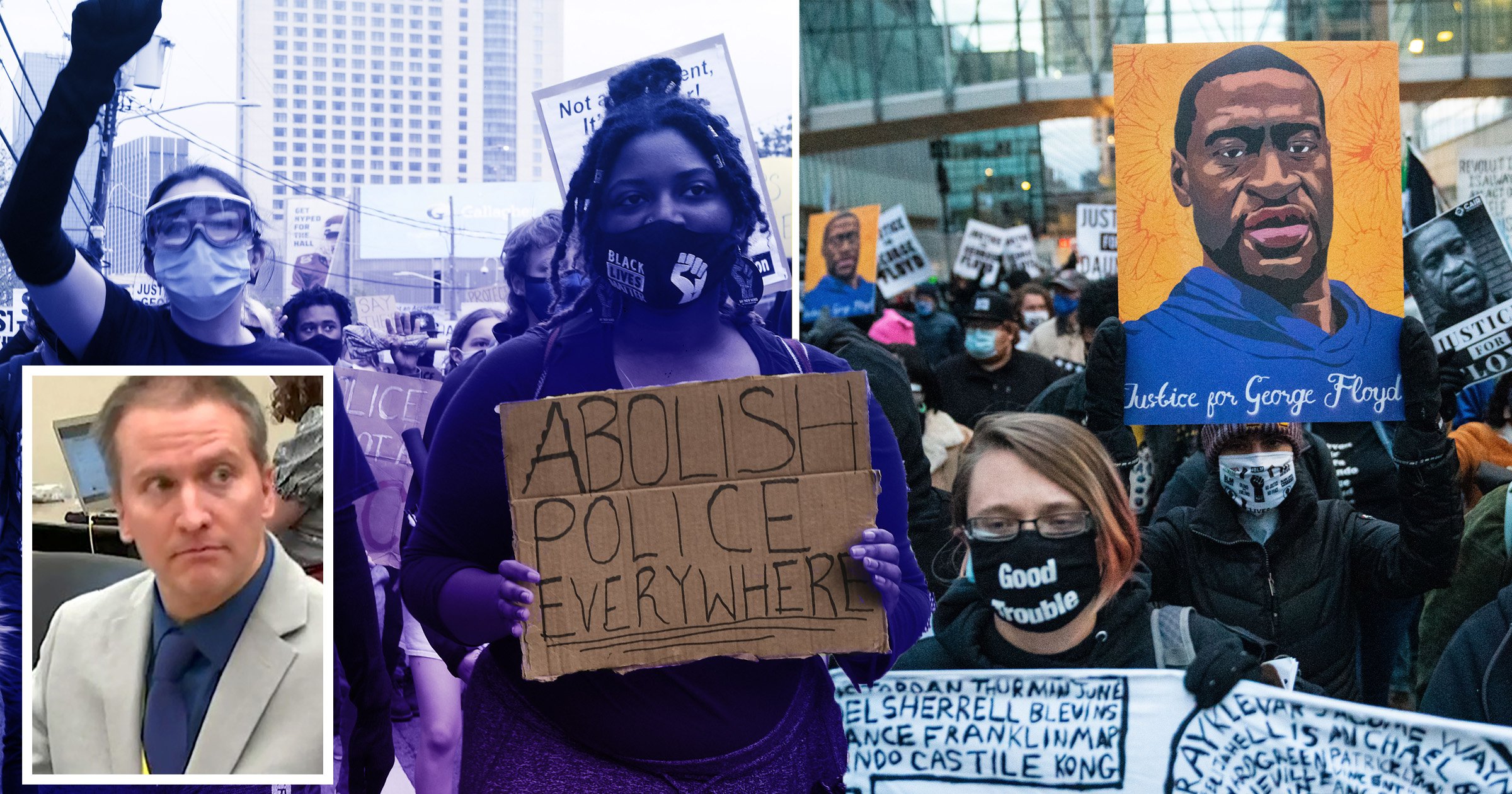 On May 25, 2020, black man George Floyd died on the street after Minneapolis Police officer Derek Chauvin knelt on his neck for nine minutes and 29 seconds during an arrest over an apparent counterfeit $20 bill.

The brutal killing, which was filmed by horrified bystanders, sparked some of the worst riots the US has ever seen and a surge of support for the Black Lives Matter movement.

Floyd’s death, for which Chauvin was charged with murder and manslaughter, fractured almost irreparably the already frail race relations between ethnic minorities and police in America.

‘I can’t breathe’ – some of Floyd’s last words – became a phrase inherited by Black Lives Matter protesters in their campaign against police brutality. The act of kneeling down on one knee – as Chauvin did to Floyd – became a symbol to push for racial equality.

The world watched, and the feeling that ‘Derek Chauvin is in the courtroom, America is on trial’, rippled across the US while his trial was underway. There were both hopes that the outcome of the murder trial could ease racial tensions and spark reform if he were found guilty – or further disintegrate race relations that hang by a thread in America if Chauvin was acquitted.

Chauvin was convicted on April 20 of murdering George Floyd after a grand jury found him guilty of all three charges relating to the African-American’s death.

The decision was met with relief, cheers and jubilation by anti-racism campaigners.

It has been reported he could get a longer sentence after a judge found aggravating factors in his murder case, including that he treated Floyd with ‘particular cruelty’.

They are that Chauvin abused his position of trust and authority as a cop, treated Floyd with ‘particular cruelty’, carried out the offense as children watched, and committed the crime as one of at least three active participants in the group.

‘George Floyd is dead is because Mr Chauvin’s heart was too small’, was the final remark by prosecutor Jerry Blackwell in front of jurors following 14 days of deliberation at the trial. Among many things, Blackwell stressed to the jury that Floyd died because Chauvin used deadly force, and not of natural or other causes.

Speaking at the Hennepin County Court, he said: ‘You were told, for example, that Mr Floyd died because his heart was too big, you heard that testimony.

‘The truth of the matter is that the reason George Floyd is dead is because Mr Chauvin’s heart was too small.’

During the trial, the prosecution called on dozens of witnesses, one of whom was breathing expert, Dr Martin Tobin, a pulmonologist and critical care physician. It was his view that George Floyd died from a lack of oxygen Chauvin knelt on his neck.

He told the court: ‘Mr Floyd died from a low level of oxygen, and this caused damage to his brain that we see, and it also caused a PEA arrhythmia because his heart stopped’. PEA stands for pulseless electrical activity – in other words, cardiac arrest.

Another key witness was the chief medical examiner who performed George Floyd’s autopsy, Dr Andrew Baker. Baker said it was Chauvin’s restraint that caused his death. Physical restraint like being held to the ground as Chauvin did to Floyd, causes stress hormones like adrenaline that make a person’s heart rate go faster, he testified.

Speaking under oath, Baker said: ‘It’s going to ask your body for more oxygen so you can get through that altercation, and in my opinion, the law enforcement subdual, restraint and the neck compression was just more than Mr Floyd could take by virtue of those heart conditions’.

Baker, who has been the chief medical examiner in Hennepin County since 2004, said that Floyd had ‘very severe underlying heart disease’ and ‘hypertensive heart disease, meaning his heart weighed more than it should’. He also added, however, that Floyd’s heart condition was a contributory fact and not the direct cause of his death.

The defense, meanwhile, confidently suggested the jury could not be absolutely sure it was Chauvin’s actions that caused Floyd’s death.

In making his closing remarks, Chauvin’s attorney Eric Nelson urged jurors to ‘not let yourselves be misled’ as he said ‘the state has failed to prove its case beyond a reasonable doubt, and therefore Mr Chauvin should be found not guilty of all counts’.

Nelson also said Chauvin acted as any ‘reasonable officer’ would in that situation and suggested there was no evidence he intentionally or purposefully used force that was unlawful.

Among several witness, the defense leaned on Barry Brodd, a former police officer and use of force expert, as one of their key witnesses. When he testified on April 13, he argued Chauvin ‘was justified’ in restraining George Floyd.

‘I felt that Derek Chauvin was justified, and was acting with objective reasonableness, following Minneapolis Police Department policy and current standards of law enforcement, in his interactions with Mr. Floyd’, said Brodd.

A former chief medical examiner, meanwhile, said the cause of Floyd’s death was ‘undetermined’ rather than a homicide.

Dr David Fowler testified that Floyd died of sudden cardiac arrhythmia, instead of oxygen deprivation from Chauvin’s knee on his neck.

Fowler raised Floyd’s pre-existing heart issues, drug use, and his exposure to vehicle exhaust, as reasons that his heart may have stopped. There were ‘so many conflicting different potential mechanisms of death’, Fowler said.

Chauvin invoked his Fifth Amendment privilege and waived his right to testify to the jury.

He has since requested a second trial, claiming ‘jury and prosecution misconduct, with defence attorney Eric Nelson saying the first one was unfair due to publicity around the case, court and prosecution errors, as well as ‘race-based pressure’ on the jury.

‘The publicity here was so pervasive and so prejudicial before and during this trial that it amounted to a structural defect in the proceedings,’ he wrote in court documents filed after the verdict.

Chauvin’s trial is the most high-profile police misconduct case in decades and came at a time when race relations are perilously close to crumbling away completely.

Floyd’s death in May 2020 and the riots that followed have been exacerbated by several additional cases of police brutality in the US over the last year. These include the death of, black man Daunte Wright, who was killed by Minnesota cop, Kim Potter, just 10 miles away from where Floyd died. Potter claimed she meant to use a Taser when pulled out her gun and fired a single bullet.

There have been countless protests, some peaceful and some violent, over police brutality issues in the US since Floyd’s death. Buildings were set on fire and police retaliated with rubber bullets and water cannons in Minneapolis, while anger spilled out across the world and other protests were held in the UK and in Europe. The city burned for countless nights as seething protesters clashed with law enforcement over the treatment of black Americans.

The US, and Minneapolis especially, braced for a repeat of the ugly scenes of last May as Chauvin faced possible acquittal.

More than 3,000 members of Minnesota’s National Guard were deployed across the city in preparation for a possible no guilty verdict and riots that could follow. Fencing and barbed wire was erected around the Minneapolis Police Department’s Fifth Precinct as authorities planned for the worst.

He told them he was ‘relieved’ that justice had been served, adding to Floyd’s daughter Gianna that her father was going ‘to change the world’.

Your apps know where you were last night, and they're not keeping it secret