Home » Americas » Girl, 6, has face 'eaten' by pitbull when neighbour lets it out cage 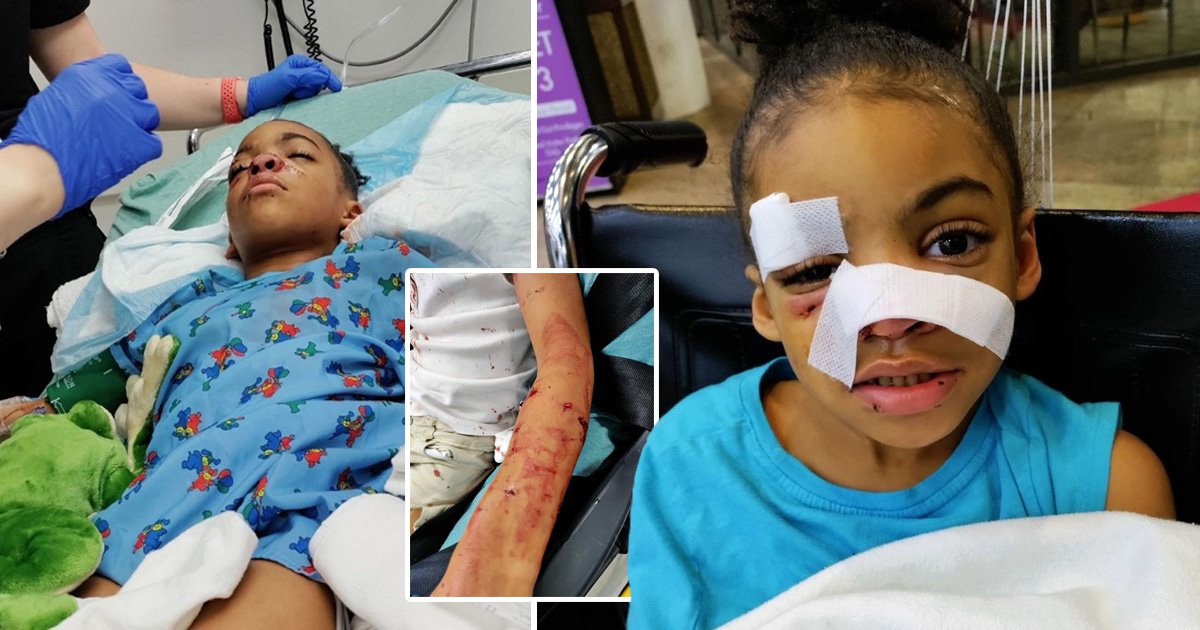 A six-year-old girl was left with a broken arm and nose, and 22 puncture wounds across her body after being attacked by a dog on her way home from school.

Ava Anderson’s nose was left ‘hanging by a thread’ and required two weeks of hospital treatment after the pit bull sank its teeth into her.

Doctors managed to stitch her face back to together, but now her family is facing medical bills of $20,000 (£16,500) and has set up a GoFundMe page to cover costs.

Ava hopped off the school bus earlier than usual on April 20, and went to wait at a neighbour’s house as she usually does.

The neighbour was dog-sitting, and when another young girl who lived there freed the dog from its cage, Ava says the dog lunged at her.

It sank its teeth into her arms and legs and dragged her into a cupboard and savagely mauled her. After realising something was wrong, the neighbour opened the door and the girl had a chance to run free into the street, where she passed out.

Ava’s mum, Sherrell, 32, claims as she turned onto the street a few minutes later and saw her child lying in the road screaming.

The girl was surrounded by paramedics, so at first her mother assumed she’d been hit by a car. Ava was rushed to hospital where she spent a fortnight undergoing surgery on her face to reattach her nose.

Now her gran Virginia Anderson has launched a GoFundMe page to cover her medical costs.

‘We’re backed up on bills for her and we need to pay for support we need for her,’ said Sherrell, from Stafford, Texas.

‘Her face is still broken in two places, they want to see if it will heal before she goes into cosmetic surgery.

‘Her nose is not the same and she’s having breathing problems. She can’t breathe on the right side of her nose so we need to see if we can do anything for her.’

Ava’s family were in the process of moving house, but the schoolgirl was still catching the bus to the same apartment until the end of the school year, where her mum would pick her up.

Sherrell said the dog ‘immediately’ went for her daughter, attacking her from the waist down before clenching her arm as she tried to run away.

‘As I came into the complex I saw my baby laid out on the floor. There were paramedics there and there was blood everywhere,’ she added.

‘When I saw her, she was screaming “mommy”, I thought maybe a car ran her over getting off the bus because that’s one of my fears.

‘I stopped my car and took off running towards her. I was so distraught and when I got up close to her and saw her face hanging by a thread it was like life or death for me.

‘I had blood on me, all over, all over the neighbour then they told me a dog did it.’

Ava spent two weeks in hospital where she had two facial reconstructions to reattach her nose, which is still broken in two places.

Mum-of-three Sherrell says Ava worries that she’s been stared at in the street due to her injuries, is in constant pain and has been left terrified of pitbulls.

Sherrell said: ‘She’s healing OK but he has pain daily. I’m trying to do daily activities with her so she can be a kid.

‘Whenever she cries she says “I’m so beautiful though” to make herself confident. Sometimes I walk in the bathroom and see her looking at it and tearing up and I tell her she’ll always be pretty.

‘Sometimes she looks at photos and refers to her nose as being “intact”. She feels that people stare at her when she goes out. She asks “why are people looking at me? Is it because of my face?”

It’s not known if the dog responsible for the attack has been destroyed.

Many metrics in the U.S. are improving, though the threat of a new surge still looms.