Federal prosecutors and lawyers for Rudolph W. Giuliani have recommended that Barbara S. Jones, a former judge in Manhattan, be appointed to review materials seized by the F.B.I. during recent searches of Mr. Giuliani’s home and office, according to a government court filing late Thursday.

The proposal, which still must be approved by a federal judge, would require Ms. Jones to determine what seized materials might be covered by attorney-client privilege and should be kept from the authorities who are investigating Mr. Giuliani.

Ms. Jones, who is now in private practice, filled a similar role three years ago when she was appointed to oversee a review of materials seized by the authorities during the investigation of Michael D. Cohen, former President Donald J. Trump’s onetime personal lawyer and fixer.

Mr. Giuliani, the former mayor of New York City who also once served as Mr. Trump’s personal lawyer, has been under investigation over his dealings in Ukraine before the 2020 presidential election, The New York Times has reported.

Federal prosecutors in Manhattan and the F.B.I. have been examining whether Mr. Giuliani lobbied the Trump administration on behalf of Ukrainian officials who were assisting him in his efforts to unearth damaging information about President Biden, who was then a leading Democratic candidate. Federal law prohibits lobbying the U.S. government on behalf of foreign officials without registering with the Justice Department, and Mr. Giuliani never registered.

Mr. Giuliani has not been accused of any wrongdoing, and he has said he never lobbied on behalf of the Ukrainians. He has denounced the F.B.I. searches as a “corrupt double standard” by the Justice Department, which he said had ignored “blatant crimes” by Mr. Biden and other Democrats.

On April 28, the F.B.I. seized 18 electronic devices, including cellphones and computers, in searches of Mr. Giuliani’s Madison Avenue apartment and his Park Avenue office in Manhattan, according to court filings.

Federal prosecutors in Manhattan, citing what they called “unusually sensitive privilege issues” raised by searches of a lawyer whose clients included a former president, had asked for the appointment of a “special master” — a neutral authority who would determine whether any of the seized materials were protected by attorney-client privilege and should be kept from investigators. 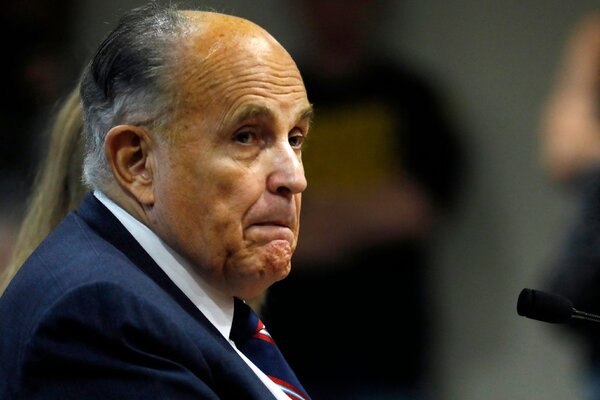 The recommendation of Ms. Jones was agreed upon by federal prosecutors and lawyers for Mr. Giuliani, the office of Audrey Strauss, the U.S. attorney in Manhattan, said in a letter to Judge J. Paul Oetken of Federal District Court, who has been overseeing the Giuliani matter.

Ms. Jones, a partner at the law firm Bracewell, had served for 17 years on the Federal District Court in Manhattan — the same court where Judge Oetken sits — after she was appointed to the bench by President Bill Clinton in 1995.

From 1977 to 1987, she worked as a prosecutor in the U.S. attorney’s office for the Southern District of New York, the office that is investigating Mr. Giuliani. (During several of the years Ms. Jones was in the office, it was led by Mr. Giuliani, who was the U.S. attorney for the Southern District from 1983 to 1989.) She later served as a senior aide to Robert M. Morgenthau, the late Manhattan district attorney.

Though Mr. Giuliani was once a partner at the firm where Ms. Jones now works, formerly known as Bracewell & Giuliani, he left before Ms. Jones arrived.

“None of the parties believe that Mr. Giuliani’s prior affiliation with Bracewell & Giuliani presents a conflict that would disqualify Judge Jones from being appointed as the special master or her firm assisting in her review,” Ms. Strauss’s office said in the letter to Judge Oetken.

While in private practice, Ms. Jones has served as a special master, a monitor or a compliance officer in a variety of court cases and other disputes, according to her website. In Mr. Cohen’s case, her review found that only a fraction of the seized materials were privileged and should be kept from investigators. Mr. Cohen eventually pleaded guilty to campaign finance and financial crimes.

Ms. Strauss’s office, in the letter to Judge Oetken, said that in the Cohen matter, Judge Kimba M. Wood, who had appointed Ms. Jones, said she had “performed her review with extraordinary efficiency and speed, while giving the parties a full opportunity to be heard.”