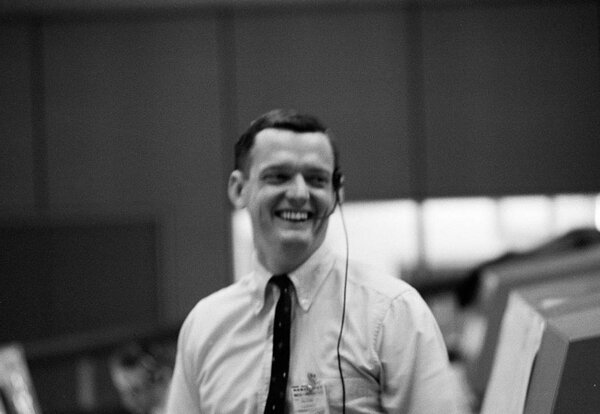 Glynn S. Lunney, the NASA flight director who played a major role in America’s space program and was hailed for his leadership in the rescue of three Apollo 13 astronauts when their spacecraft was rocked by an explosion en route to the moon in 1973, died on March 19 at his home in Clear Lake, Texas. He was 84.

The cause was stomach cancer, his son Shawn said.

Mr. Lunney (rhymes with “sunny”), who joined NASA at its inception in 1958 and became its chief flight director in 1968, worked out of mission control in Houston in developing the elaborate procedures for the flight of Apollo 11, sending Neil Armstrong and Buzz Aldrin on their pioneering journey to the moon in July 1969.

He managed the July 1975 mission in which an Apollo spacecraft with three astronauts docked with a two-man Russian Soyuz spaceship. Each vehicle carried equipment that would facilitate another linkup someday if an international rescue mission were needed. The Americans and the Russians carried out joint experiments and exchanged commemorative gifts in what became a step toward cooperation among nations in space aboard the International Space Station.

Along with three other flight directors and numerous NASA scientists and astronauts at the command center, he worked out the complex plan that enabled them to make it back to Earth.

Mr. Lunney looked back on the effort as “the best piece of operations work I ever did or could hope to do.”

“We built a quarter-million-mile space highway paved by one decision, one choice, and one innovation at a time, repeated constantly over almost four days to bring the crew safely home,” he recalled in a NASA oral history interview.

“This space highway guided the crippled ship back to planet Earth, where people from all continents were bonded in support of these three explorers-in-peril. It was an inspiring and emotional feeling, reminding us once again of our common humanity.”

Since the astronauts’ command module had been crippled by the explosion, mission control directed them to use their undamaged lunar lander as a lifeboat to carry them home.

The lander was originally designed to descend to the moon from the orbiting Apollo 13 craft, with Mr. Swigert aboard, and then return to the mother ship with Mr. Lovell and Mr. Haise for the journey home. But the Houston ground crew, working under intense time pressure with no blueprint for this type of effort, improvised a way for them to make a safe splashdown in the Pacific huddled together in the lunar lander.

Mr. Lunney was among the NASA officials who received the Presidential Medal of Freedom from Richard M. Nixon for the rescue. In the hit 1995 movie “Apollo 13,” Marc McClure played Mr. Lunney.

Glynn Stephen Lunney was born on Nov. 27, 1936, in Old Forge, Pa., to William Lunney, a coal miner and welder, and Helen Glynn Lunney.

As a youngster, Glynn was intrigued by flight and filled his room with model airplanes. He earned a degree in aerospace engineering from the University of Detroit (now the University of Detroit Mercy) after working in a cooperative program in which he divided time between his studies and working for the National Advisory Committee for Aeronautics, the forerunner of NASA.

Mr. Lunney was the space agency’s fourth flight director. In that post, he was responsible for leading teams of flight controllers, research and engineering experts and support personnel around the world making decisions during spaceflights.

Among the numerous achievements of his NASA career, Mr. Lunney was lead flight director for Apollo 7, the first crewed Apollo flight, and Apollo 10, the dress rehearsal for the first moon landing.

He retired from NASA in 1985 as manager of the space shuttle program, but he continued to lead human spaceflight activities through executive posts in private industry.

In addition to his son Shawn, Mr. Lunney is survived by his wife, Marilyn Jean (Kurtz) Lunney, who had been a nurse in a NASA forerunner research center; two other sons, Glynn Jr. and Bryan; his daughter, Jenifer Brayley; his brothers, Bill and Gerry; his sister, Carol; and 12 grandchildren.

The astronaut Ken Mattingly, who was scheduled to fly on the Apollo 13 mission but was taken off it upon being exposed to German measles, was one of the many space agency figures working on the plan to save the Apollo 13 astronauts.

He recalled how, in the immediate aftermath of the explosion, “nobody knew what the hell was going on.”

“And Glynn walked in, took over this mess,” he remembered in “Voices From the Moon” (2009), an astronaut oral history complied by Andrew Chaikin and Victoria Kohl.

“And he just brought calm to the situation,” Mr. Mattingly said. “I’ve never seen such an extraordinary example of leadership in my entire career. Absolutely magnificent.

“No general or admiral in wartime could ever be more magnificent than Glynn was that night,” he added. “He and he alone brought all of the scared people together.”

Trump says he will release 'financial statement' before 2020 vote