Home » Americas » ‘God Is Going to Have to Forgive Me’: Young Evangelicals Speak Out

The role of evangelical Christianity in American politics has been a hotly discussed topic this year, intersecting with front-burner issues like immigration, the Supreme Court and social justice. Often the loudest evangelical voices are white, male and … not young.

With just days left before the midterm elections — two years after President Trump won the White House with a record share of white, evangelical support — we asked young evangelicals to tell The Times about the relationship between their faith and their politics.

Nearly 1,500 readers replied, from every state but Alaska and Vermont. Hundreds wrote long essays about their families and communities. They go to prominent megachurches as well as small Southern Baptist, nondenominational and even mainline Protestant congregations. Some said they have left evangelicalism altogether.

We read every submission and spent many hours interviewing respondents. Here’s what we learned:

Young evangelicals are questioning the typical ties between evangelicalism and Republican politics. Many said it had caused schisms within their families. And many described a real struggle with an administration they see as hostile to immigrants, Muslims, L.G.B.T.Q. people, and the poor. They feel it reflects a loss of humanity, which conflicts with their spiritual call.

Plenty of young evangelicals believe Mr. Trump has helped to achieve their biggest goals, like curbing abortion rights and advancing religious liberties. But they are sensitive to other issues. Many feel politically independent, or politically homeless. There is a fight for what the term ‘evangelical’ even means, and they are living it.

And the struggle is not just with political leaders, but also within their religious communities.

The six young evangelicals featured here, all deeply involved in their churches, offer the textured sound of the rising evangelical voice in America, one that is often drowned out by white elders. The interviews and quotations from submissions have been lightly edited and condensed for clarity.

We are opening the comments section, and hope that you will add your own voice. 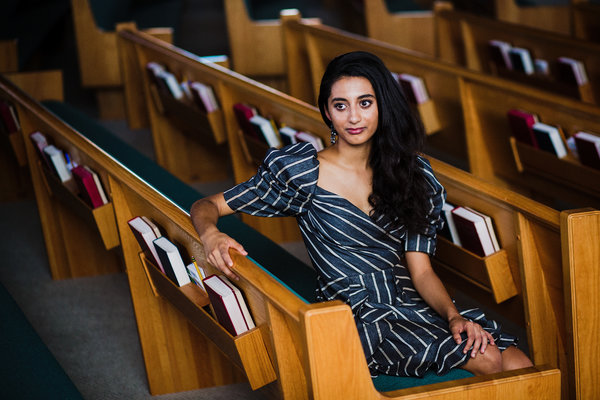 I was pulled out of Smith College in 2015 when I told my parents that I was rethinking the legitimacy of anti-gay theology. I thought, “God is going to have to forgive me. I am not going to die in this culture war.”

I was Republican like them. Before, I supported whatever my church told me about candidates and issues. I never questioned or read outside material on these subjects. I secretly started borrowing books from the library.

I gave a communion message in 2016 — it was, “Our God chooses to die the death of all these marginalized people. He dies like Matthew Shepard, like a kid at the hand of the state. He was a refugee.” My church reprimanded me for “abusing the pulpit.” Other members used it to openly stump for Trump and say hateful things about Muslims and L.G.B.T. citizens.

I’m worried that we’ve done immense harm to the marginalized in the name of God. You realize it is not good news at all if you are just baptizing certain inequalities or biases.

I don’t feel so much like I am leaving conservative evangelicalism. I worship like one, I talk like one. It’s not like I can pull myself out of this relationship. I feel incredibly guilty for attending a church I can’t invite people to. But I love the community that raised me. A lot of evangelical parents are judged by the successful transmission of values to their children. I haven’t wanted to shame them.

I am very excited to vote for Andrew Gillum. It is not that you have conservative evangelicals suddenly becoming liberal. It is more a realizing that you could be practicing something that isn’t even Christian at all.

My parents are very much among the white evangelical demographic that voted for Trump, and still proudly support him. I’ve never told them I’ve voted for Democrats. Whenever they read this, they’ll find out a lot.

Last year I was in the car with my mom and her husband. Trump had said something. I said, “Well he’s racist and homophobic.” They were quick to dismiss that. That was the most I’ve ever talked politics with my mom. It was five minutes.

I am a devout believer of Jesus, but I voted for Hillary Clinton because I believed she would be a good leader for this country. Politics is more than just one issue, we have to look at all aspects of each candidate and discern who could represent us best. Donald Trump represents nobody but himself.

There are a lot of old white men in the Republican Party that use Christianity as a weapon to get themselves elected, but I’m here to tell you that we do not fall for them. The Jesus those men depict is not the Jesus that healed the sick and broke down social barriers. We are not a part of those men’s religion, and my hope is people will see that.

I don’t consider myself Republican or Democrat. I am pro-life. It’s not just abortion, it’s people in prisons being treated terribly. I went to the Women’s March knowing I wouldn’t agree with a lot of what they are saying. But there’s inequality in the workplace, there’s sexual abuse.

This is the first time I’ll vote down ballot. If Issue 1 gets passed, that is a huge victory, reducing drug use from a felony to a misdemeanor. I’ve canvassed for it.

I don’t know if I feel betrayed. My eyes have been opened. Like if you have a best friend and you find out something crazy about them. I’m still working through the shock of that. There are a lot of people who are going to go to heaven who voted for Trump.

My family moved here from Mexico in 1999. My parents are pastors, and we have been Pentecostal-evangelical for a very long time.

Being socially conservative, yet immigrants, has been interesting at best and conflicting at worst. Most people in my parent’s church are recent immigrants. We agree with most of what Donald Trump says about God and faith, but we do disagree with what he says about immigrants and any misconduct that he and others may try to justify in his personal life.

Being an evangelical Christian, I have to compromise. I am choosing to prioritize my core Christian beliefs over the immigration policies the G.O.P. is pushing right now. That is a point of tension.

I don’t talk politics to anyone, not even my family. We talk about Christian values.

I know Trump has brought back prayer. Knowing that our leaders believe those same core beliefs as us is something that brings calm. We know they have our best interest in mind.

I can see their point of view that they don’t want illegal immigration, being afraid of foreigners taking over, there being a sense of control at the border. But I grew up in a Latino family. We are here to make a better life for our families.

The left will probably win the next election, but I am always hopeful that God is doing big things in this country regardless if it directly involves politics or not.

I’ve always been Republican, and yes! I am really happy with my vote for Trump.

His election was huge since half my family could not see why the other half voted for him, going so far as to say it changed their opinion of us. It’s hard enough to be just a Christian, but as a Republican it’s even harder.

No one cared about us until Trump. We have a farm, south of Paxton. It’s a town of about 600 people. Popcorn is one of our more specialty crops. Wheat, soybeans. We were tired of having corn drop 40 cents a day. Finally somebody gets it. So our community is upbeat.

In the Kavanaugh hearing, I thought, this girl is lying. Then I talked with my sisters, who helped me see that I was looking at it through the lens of a Republican, not the lens of a Christian. She deserved just as much grace as Kavanaugh did.

As a Christian, I drive around the town now and see the billboards that say, “Jesus is lighting the way.” But before, when you’d say you are a Christian, that would signal you are a critical, judgmental person. I feel a little bit more safe now, going into places and saying, “I’m a Christian.”

What are the misconceptions about young evangelicals? That we are hypocritical, heretics, with pitch forks and ropes to lynch anyone opposed to our beliefs. No. We are not this bigoted, noose-tying faith.

I’m worried we will be silenced by others who shout very loudly.

Because I live in California and attend a Chinese church, my experience is different from what I see in the news.

When I see professing Christian leaders like Jerry Falwell Jr. or Franklin Graham speak about how great Trump is, it concerns me that the nuances I see in my small cultural enclave may not exist elsewhere in the country. Who are these people? Do they actually wield that much authority?

I am an only child from a Chinese-American family. Stereotypically, Chinese-Americans are not as outspoken about social/political issues — or uncomfortable subjects in general. There’s a focus on respecting elders, authority. Pair that with Christianity, and people are not necessarily as inclined to engage in political activism.

I don’t think I diverge theologically from my parents in major ways, but while my family is quicker to blame “the liberals,” I’m able to see that they aren’t evil, just people trying to do things in a different way. We diverge mostly on how to biblically address social issues: DACA, #MeToo, immigration.

It’s been frustrating to see people in my church community not engage, particularly on those issues which the Bible seems to speak about directly, like racism and sexism.

For governor in California, my inclination is to like Gavin Newsom. I’m Democrat by default, simply by the way things have gone with the Republican Party over the past few years, but it is an uneasy alliance. As a Christian I feel ties with the Bible first.

As a Christian it is absolutely a part of my duty to vote. I am registered to vote in Atlanta and I plan to vote for Stacey Abrams. It’s the first time I’ll vote Democrat. She is black and a woman. I am also both of those things. That’s really important to me.

When I have white friends or colleagues, and they assume that I align fully with the Democratic Party, I try to be as tactful as possible. Wait, should I be fully Democratic? But as a Christian there will be things I don’t fully agree with.

As I’ve gotten older I realized I couldn’t be silent any more. Both the murder of Botham Jean in Dallas, Texas, and the confirmation of Supreme Court Justice Brett Kavanaugh have caused me to question the legitimacy of my voice and safety in American society. I was incensed — a black man was shot in his own home.

Both of these stories directly and indirectly communicate something about black people and women. Our worth hangs in the balance. As a Christian, I understand and believe that I have inherent worth, but politically it’s still a battle.

I grew up in a Christian home, nondenominational, and am still following Jesus today and attend church regularly. My parents tend to lean more on the conservative side of things whereas I have a more liberal bent.

Climate change is honestly one of the biggest issues my parents and I disagree on. I think they still believe it’s all made up.

California Today: Risking All to Save Helltown From Burning