Although the police said that investigators were still examining possible motives for the mass shooting, David L. Hansen, the city manager, said that the suspect, DeWayne Craddock, had sent an email on Friday that declared his intention to quit.

“He notified his chain of command that morning,” said Mr. Hansen, adding that Mr. Craddock’s resignation had not been forced and that investigators were still trying to recover a copy of the email. 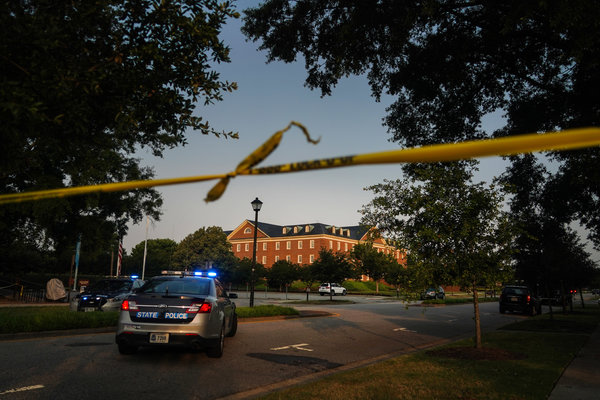 Herbert Snelling, a contractor who was at the municipal center to see about a permit, was also killed.

[ Read more about the victims. ]

Local hospitals said that four people injured in the attack were in critical condition on Sunday morning. One patient who had been listed in fair condition “is critical this morning due to post-surgery recovery,” Sentara Virginia Beach General Hospital said in a statement.

Mr. Craddock had worked for the city for about 15 years, officials said, and had trained as an engineer. He spent time in the Virginia National Guard, and public records did not suggest that he had any history with the criminal justice system other than traffic violations.

[ Read more about the suspected gunman. ]

Two handguns found with Mr. Craddock were purchased legally in 2016 and 2018, the authorities said. Federal investigators said that two more weapons were found during a search of his apartment and that at least one of them had been purchased legally.

The police chief, James A. Cervera, said on Sunday that Mr. Craddock had engaged in a gun battle with four police officers who had entered Building No. 2, the scene of the attack, on Friday. He was ultimately wounded and died of his injuries.

No one can solve wall shutdown crisis but me, insists Trump

Boy, 17, arrested and charged over huge Twitter hack of stars including Obama

EuroMillions results August 11: What are the winning numbers for Tuesday? Live results
Asia