The first explosions rang out after 1 a.m., shattering the calm in the neighborhood that was home to President Jovenel Moïse and many of Haiti’s most affluent citizens.

Residents immediately feared two of the terrors that have plagued the nation — gang violence or an earthquake — but by dawn, a much different reality had emerged: The president was dead.

A group of unknown assailants had stormed Mr. Moïse’s residence on the outskirts of the capital, Port-au-Prince, early on Wednesday, shooting him and wounding his wife, Martine Moïse, in what officials called a well-planned operation that included “foreigners” who spoke Spanish.

In a televised broadcast to the nation, the nation’s interim prime minister, Claude Joseph, appealed for calm and presented himself as the new head of the government, announcing that he and his fellow ministers had declared a “state of siege” and placed Haiti under a form of martial law.

But the assassination left a political void that deepened the turmoil and violence that has gripped Haiti for months, threatening to tip one of the world’s most troubled nations further into lawlessness. 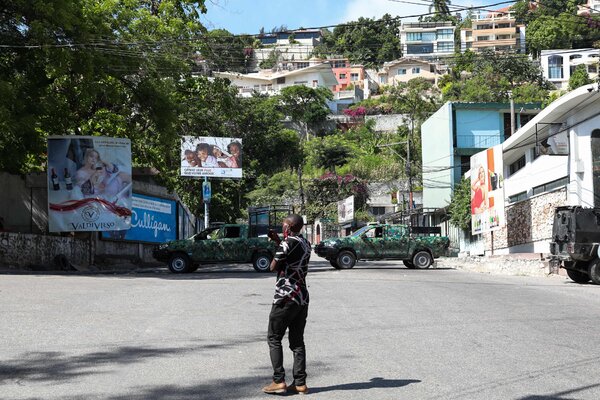 In recent months, protesters had taken to the streets to demand Mr. Moïse step down in February, five years after his election, at what they deemed was the end his term.

Armed gangs have taken greater control of the streets, terrorizing poor neighborhoods and sending thousands fleeing, kidnapping even schoolchildren and church pastors in the middle of their services. Poverty and hunger are rising, with many accusing members of the government of enriching themselves while not providing the population with even the most basic services.

In an interview, Mr. Joseph told The New York Times that he was now in control of the country, but it was unclear how much legitimacy he had, or how long it might last. A new prime minister had been scheduled to replace Mr. Joseph this week — he would have been the sixth to hold the job in Mr. Moïse’s term. The head of the nation’s highest court, who might have helped establish order, died of Covid-19 in June.

“We are in total confusion,” said Jacky Lumarque, rector of Quisqueya University, a large private university in Port-au-Prince. “We have two prime ministers. We can’t say which is more legitimate than the other.”

“This is the first time where we’ve seen that the state is so weak,” he added.

Haiti’s ambassador to the United States, Bocchit Edmond, said at a news conference that the killing of the country’s president had been carried out “by well-trained professionals, killers, commandos.”

He said the attackers had presented themselves as agents of the U.S. Drug Enforcement Agency, but that they were “fake D.E.A.” and “professional killers.” He said he was basing his assessment on security camera footage of the attack.

Mr. Moïse’s wife survived and was “stable, but in critical condition,” Mr. Edmond said. She was transported to Miami for treatment, arriving there Wednesday evening.

President Biden said Wednesday that he was “shocked and saddened” by the assassination and the shooting of the president’s wife. “We condemn this heinous act,” Mr. Biden said in a statement.

Mr. Moïse had held on to the office, arguing he had only occupied the position for four years of the five-year term. In the first year after he was elected, an interim president took over as the country investigated allegations of fraud. Many Haitians — including constitutional scholars and legal experts — contended that his five-year term started when he was elected, and has since expired. But the United States and the Organization of American States backed Mr. Moïse.

While the United States and other nations have long supplied Haiti with much-needed aid and financial assistance, including help in recovering from a devastating earthquake in 2010, Western powers have also exerted an overwhelming influence over the country’s political destiny. The United States occupied the country from 1915 to 1934, and a series of coups in the 20th and 21st centuries were backed by Western powers.

France, in particular, has had a long and difficult relationship with Haiti. More than two centuries ago, Haitians fought to throw off the yoke of colonial France and to bring an end to one of the world’s most brutal slave colonies, which had brought France great wealth.

What started as an uprising by enslaved people at the turn of the 18th century eventually led to the stunning defeat of Napoleon’s forces in 1803. While many in Haiti’s professional class study in France, others harbor anti-French sentiment. The first visit by a French president was not until 2010.

France’s foreign minister, Jean-Yves Le Drian, said in a statement that he was “shocked” by Mr. Moïse’s killing. “All light must be shed on this crime, which comes amid a very deteriorated political and security climate,” Mr. Le Drian said. He urged “all of the actors of Haitian political life” to observe “calm and restraint.”

Within Haiti, experts warned, the political vacuum left by Mr. Moïse’s killing could fuel a renewed cycle of violence. As the population struggled to assess the situation, the normally clogged streets of the capital remained ominously empty.

Banks and stores were shuttered; university classrooms vacant; the ti machann — or market women — who normally line the shoulders of roads selling their wares were conspicuously absent.

Lines formed as some people tried to stock up on water — which is normally bought by the container in poorer areas — in case they end up hunkered down for a long time. Many others huddled at home, calling friends and family to check their safety and to ask for updates. In some middle-class neighborhoods, people gathered on the sidewalks, sharing their fears for the country’s future.

“Things are hard and ugly now,” said Jenny Joseph, a university student from the suburb of Carrefour. “For the next few days, things will be crazy in Haiti.”

Under the martial law declaration, the police and security members can enter homes, control traffic and take special security measures and “all general measures that permit the arrest of the assassins” for 15 days. The decree also forbids meetings meant to incite disorder.

However, it is unclear whether Mr. Joseph has the authority to do this, or even the authority to run the country in the wake of President Moïse’s death. The country has two constitutions, neither of which tap the interim prime minister to take over. The first one, published in 1987, says the country’s most senior judge should step in. In 2012, however, it was amended to say that if there’s a vacancy in the last year of a president’s term, the Parliament should vote for a provisional president.

Unfortunately, the Constitution was amended in one of the country’s official languages, French, but not in the other, Creole. So as it stands, the country has two constitutions.

At the moment, Haiti has no functioning Parliament. Mr. Moïse’s government did not call elections, even after the terms of the entire lower house expired more than a year ago. Only 10 of Haiti’s 30 senate seats are currently filled.

Mr. Moïse had been struggling to quell growing public anger over remaining in power.

After Mr. Moïse did not leave office in February, when many in the opposition deemed his term over, thousands of Haitians took to the streets in large marches, demanding his resignation. The government responded by arresting 23 people, including a top judge and a senior police officer, who the president said had tried to kill him and overthrow the government.

Mr. Moïse counted on a high level of protection, traveling regularly with more than a dozen armored cars and police guards. There are often 100 officers from the presidential guard around the president’s home, said former Prime Minister Laurent Lamothe.

There had been no specific warning of the overnight attack, said the ambassador, Mr. Edmond.

It was not clear whether the assassins were still in Haiti, he said. Because the country’s airport was closed down on Wednesday, he said, they might have slipped across the border to the Dominican Republic, which shares the island of Hispaniola with Haiti, or escaped by sea.

Mr. Edmond said he has been in touch with the White House, the State Department and the American ambassador to Haiti, and has called on the United States for help.

The support, he said, would help “to make sure Haiti doesn’t go even deeper into a spiral of violence,” and specifically, “to make sure that the Haitian police have the necessary means to put the situation under control.”

Because of its chronic instability, Haiti has a large diaspora, with some of the largest communities based in the United States, Canada, France and the Dominican Republic. Generally politically divided, Haitians abroad followed the news of Mr. Moïse’s killing united by their shock and despair, said Leonie Hermantin, a Haitian community leader in Miami.

“Even for those of us who weren’t necessarily in support of him, this is not what we had envisioned as an outcome of regime change,” she said.

“The diaspora is united in its sadness,” she added. “There’s no one celebrating.”