You spend 80 hours making a custom suit, crafting every stitch by hand, measuring and fitting five times — a beautiful thing — and then the customer goes and drapes it over the back of a metal chair.

This is the sort of thing that tests the sartorial sang-froid of Yosel Tiefenbrun, the bespoke tailor and nonpracticing Chabad rabbi of East Williamsburg, Brooklyn. 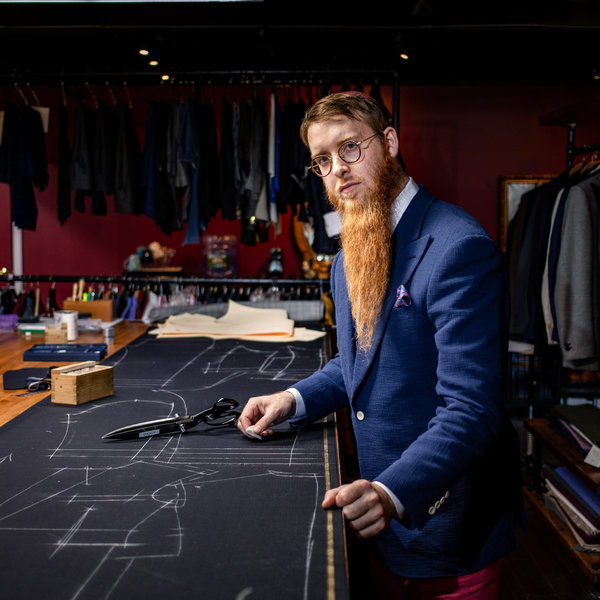 Mr. Tiefenbrun, 30, came to Brooklyn via London’s Savile Row and Singapore, where he helped lead a congregation of expatriates. In a borough that has embraced artisanal, handcrafted everything, he is hoping that bespoke suits, made to order, are the next Instagram-ready fetish item. “It’s definitely making a comeback,” he said.

“The majority of my clientele are in their 30s — Ultra-Orthodox Jews, C.E.O.s, jazz musicians. It’s like the appreciation we see now for finer things in food and whisky and cigars. People want to know where it’s from, what it’s made of.”

The photographer Stephen Speranza, 27, who owns a total of one suit — off the rack — started venturing into tailor shops in Brooklyn almost as an archaeology project. They looked so dated and forgotten.

But inside their doors he found vibrant cultural scenes, with virtuosic artisans and conversations out of barber shops. “Everyone’s path into the tailor business was different,” Mr. Speranza said. “And they all had their own niches.”

Some agreed readily to be photographed, but others turned him away, fearing that rival tailors would use the photographs to steal their designs. One said he had made suits for Jay-Z; another said his business boomed during the crack era, but then contracted when the neighborhood became gentrified — the newcomers came only for quickie alterations, not custom suits. Sigh.

“I look at myself as an artist,” said Antonio Brown, 60, who runs a shop called Mi Montuno, named for a traditional shirt in his native Panama. “I like to mix colors and fabrics to make one-of-a-kind garments. Once I make a design, I don’t do it again.” Mr. Brown charges about $550 for a custom men’s suit, not including the fabric.

“The hardest part of making a suit is the customer,” he said. “Some people don’t know what they want. They want it loose, then they want it tight. That’s why you have to have two fittings.”

A common peeve among tailors: too much dry cleaning, poorly done. Unless there is a stain or a lot of sweat, let the wool heal itself.

At Franco Ercole Bespoke in the Dyker Heights neighborhood, a visit begins with an espresso with Franco Petrungaro or his father, Ercole, and might include some gentle nudging: put a little pleat in your trou, and consider English wools over Italian; they’re sturdier. Custom suits average about $3,500 and take 70 hours to make.

Franco Petrungaro said he tries to rescue men from the current tight silhouette that looks good on very few, but he has not been able to escape the political divisiveness of the day. “I’ll let the clients go at it all day long,” he said. “I stay out of it.”

But he was optimistic that a brighter day is on the horizon. For clothes, at least. “Italy is already starting to show pleats,” he said. “Full lapels are definitely on the way back.”

John Leland, a Metro reporter, joined The Times in 2000. His most recent book is “Happiness Is a Choice You Make: Lessons From a Year Among the Oldest Old,” based on a Times series. @johnleland

How Neighbors Are Coming Together to Buy Local for the Holidays