Home » Americas » Has New York Hit a Progressive Plateau? The Mayor’s Race Is a Key Test.

A year ago, the left wing of New York’s Democratic Party was ascendant. Deeply progressive candidates triumphed in state legislative primaries and won a congressional upset, activists fueled a movement to rein in the power of the police, and Mayor Bill de Blasio agreed to cut the Police Department budget.

But for most of the Democratic primary season this spring, nearly every available metric has suggested that the political energy has shifted. The question is, by how much.

The June 22 primary contests for mayor and other city offices are critical, if imperfect, tests of the mood of Democratic voters on the cusp of a summer that many experts believe will be marked by high rates of gun violence in cities across the United States.

The Democratic race for mayor has in some ways reflected national tensions within the party over how far to the left its leaders should tack, after President Biden won the party’s nomination on the strength of moderate Black voters and older Americans, and Republicans secured surprising down-ballot general election victories.

Now, a version of that debate is playing out even in overwhelmingly liberal New York City, where the Democratic primary winner will almost certainly become the next mayor. The primary underscores how the battle for the party’s direction extends far beyond concerns over defeating Republicans.

Polls have increasingly shown that combating crime is the top priority among New York Democrats, a sentiment that was evident in interviews with voters across the city in recent months, from Harlem to Kew Gardens Hills, Queens. The debate over what role the police should play in maintaining public safety has become the biggest wedge issue in the mayoral campaign.

Eric Adams, the Brooklyn borough president and former police captain who has recently led in the few available public polls, is a relative moderate on questions of policing and charter schools and in his posture toward business and the real estate industry.

In other major contests — most notably, the Manhattan district attorney’s race — there are signs that the contenders who are furthest to the left are struggling to capture the same traction that propelled like-minded candidates in recent years.

“The political class, I think, thought that the party, that the voters, had moved very, very far to the left,” Kathryn Garcia, a former sanitation commissioner and another leading mayoral candidate, said in an interview last month. “That they were at a moment where they wanted to do radical, radical change. I just never believed that that was true.”

The party’s left wing still holds extraordinary sway, and the mayor’s race, which will be decided by ranked-choice voting and largely shaped by local concerns, is far from the only test of its power. Progressive lawmakers are a force in the State Legislature and have already triumphed by passing a far-reaching budget agreement. The New York City chapter of the Democratic Socialists of America, which has stayed out of the mayor’s race, is focusing instead on City Council primaries.

Some activists say that if the trajectory of the mayor’s race has sometimes been worrisome, it has more to do with controversies surrounding individual candidates than with New Yorkers’ largely progressive attitudes.

“It’s a little taxing with all the drama that has been happening,” said Liat Olenick, a leader of the progressive group Indivisible Nation Brooklyn. “Coalescing is happening. It is really late, so we’ll have to see.”

Indeed, even with the primary just over a week away, there is time for progressive leaders to consolidate their support. Maya Wiley is increasingly seen as the left-leaning candidate with the best chance of winning, and many progressives are moving urgently to line up behind her in an effort that could reshape the race in the final stretch.

In the last several election cycles, New York Democrats have undeniably moved to the left, galvanized in part by outrage over former President Donald J. Trump. But with Mr. Trump out of office, voters have become more focused on recovering from the pandemic than on politics.

It was always going to be harder for progressive activists to replicate their legislative victories citywide in a vast metropolis that includes some of the most left-wing voters in the country, but also many moderates.

On issues including homelessness, education and especially policing, the most progressive prescriptions have not always been popular, even in heavily Democratic neighborhoods.

“More police need to be out here,” Linda Acosta, 50, said as she walked into the Bronx Night Market off Fordham Road on a recent Saturday. “Not to harass. To do their job.”

Ms. Wiley, Scott M. Stringer, the city comptroller, and Dianne Morales, a former nonprofit executive, have supported cuts to the police budget. They argue that adding more officers to patrol the subway would not meaningfully reduce violence. Ms. Wiley and others have promoted alternatives, including investments in mental health professionals and in schools.

Those positions have been central to a broader competition among the candidates seeking to be the left-wing standard-bearer, even as Mr. Stringer and Ms. Morales have struggled with campaign controversies.

Last Saturday, Representative Alexandria Ocasio-Cortez endorsed Ms. Wiley for mayor, a potentially race-altering move that has not yet been measured in high-quality public polling. The same day, Representative Jamaal Bowman, a left-wing Democrat who beat the longtime incumbent Eliot Engel last summer, said he was supporting Ms. Wiley as well.

On Wednesday, Jumaane D. Williams, the city’s public advocate, also endorsed Ms. Wiley, who is seeking to attract voters of color across the ideological spectrum as well as white progressives. Mr. Williams stressed his concerns about certain language being used in the race about public safety issues.

“This moment is being dominated by a loud discussion of whether New York will return to the bad old days,” Mr. Williams said. “For so many of us, those ‘bad old days’ run through Bloomberg and Giuliani” and “the abuses of stop-and-frisk and surveillance.” 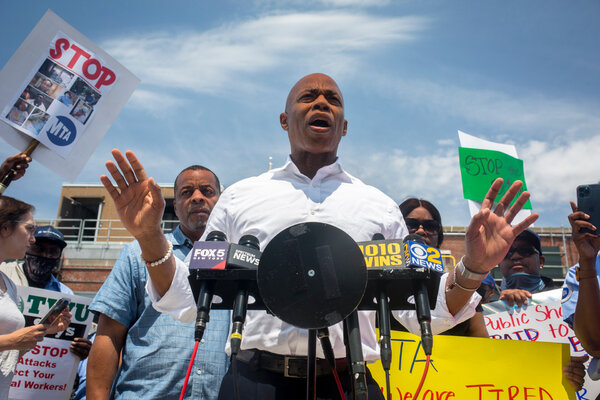 Still, Mr. Adams has led the mayor’s race in recent surveys, often followed by Andrew Yang and Ms. Garcia, two other relatively centrist candidates. Many strategists said Mr. Adams’s rise was tied to public safety concerns, even as he has begun to attract more scrutiny.

All of the leading contenders stress that public safety is not at odds with racial justice, another vital priority for New York Democrats. The candidates who are considered more centrist support reining in officers’ misconduct and making changes to the Police Department, and Mr. Adams worked on those issues as a police officer.