Home » Americas » He Befriended 4,000 Dogs to Get Their Side of the Story

Dogs in New York City have a miserable life — that’s what Ken Foster kept hearing. How could they not? Many live in tiny apartments. Most do not have backyards to romp around in. They are bored at home all day while their owners toil long hours.

Mr. Foster’s job is to help dogs (and cats, too). He runs a community outreach program in the Bronx for the Animal Care Centers of NYC, a nonprofit that operates the city’s animal shelters. The program provides free vaccinations, training and food to pets whose owners are struggling financially. Mr. Foster, 54, also writes books about dogs.

He has met more than 4,000 dogs in their homes, in their neighborhoods and with the people they love. Lots of them are happy. So Mr. Foster and a photographer, Traer Scott, decided to tell some of the canines’ stories in a new book, “City of Dogs.”

This interview has been edited and condensed.

Q. What did you learn about how dogs live in New York City?

A. People live a variety of amazing, different kinds of lifestyles in the city, and dogs do as well. I think we think of dogs strictly as pets, but we went to J.F.K. Airport, where there are dogs that work and love their jobs. They are mostly looking for agricultural contraband, but they also go through the mail that comes through, like every piece of mail. They go through people’s luggage on the conveyor belts. It’s like a game that they’re playing all day long. We should all enjoy our jobs that much.

What is an example of a dog living the good life?

There’s Oz. He’s a pit bull mix in NoHo. His owner, Noah, is a trainer and has this chain of gyms across the country called Rumble Boxing. Oz often goes to the gym and sits, waiting for classes to be over. He lives in a great apartment with a nice roof deck. He’s got the spoiled life. I like to say, and Noah doesn’t disagree, that he needed to maintain his dog in the lifestyle he deserved.

You even found dogs on Rikers Island. What are they doing there?

The Rikers dogs are spending eight weeks, usually living in a cell with inmates who are charged with caring for them and training them. They come from different shelters. The men who are assigned to them work in teams, so part of it is also about really learning to work with other people and build team skills. It’s a mutually beneficial exchange. A lot of the men have dogs that are waiting for them to come home. 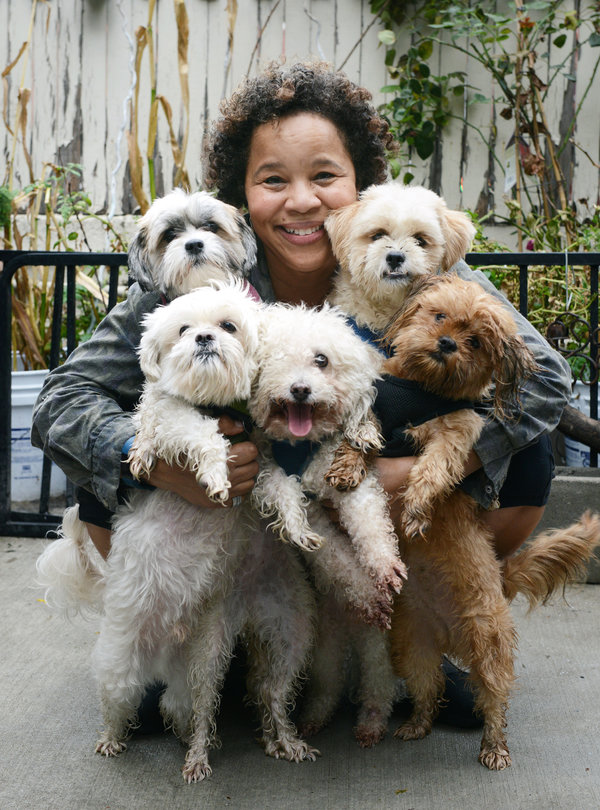 You went to all five boroughs in search of dogs. How are the dogs different by borough?

Manhattan: They are more cosmopolitan because they’re used to being around a lot of activity, a lot of people, a lot of businesses. They walk by everything that’s going on every day because Manhattan is completely built up. There aren’t many quiet corners left.

Staten Island: They are quieter. They’re a little bit more laid back because they have less chaos around them. They probably have no idea that they live in New York City. It’s very suburban there.

Brooklyn: The dogs that we met were, for the most part, from single-dog homes. Even if they were in a family, it was five people and one dog. And so they seemed to feel a little bit like they were the center of the world. Maybe Brooklyn feels that way about itself, too, these days?

Queens: They are the most diverse. If you look at the pictures that we took in Long Island City of a group of people who meet every morning with their dogs, every dog is completely different. There’s a sheepdog, an Akita, a pit bull, a corgi, a Pekingese, and a Chihuahua. These dogs are all best friends.

What is one of your favorite dog places in the book?

You can go off-leash in Central Park after dark. It seemed like something out of a storybook, and the moon was out and it was reflecting in the water. At first, there weren’t that many other people around, but as we went a little deeper into the park, we started running into more and more people with their dogs. It really was like a secret society because unless you have a dog, you’re probably not going to walk in there.

Did you actually interview the dogs or just their owners?

It was really a little bit of both. Sometimes their owners try to speak for them. But then, if you’re observing, you can see where the dog might disagree. We talked about, where do you want to go? Where do you typically go with your dog? That’s kind of a dog interview, I think, when you walk a neighborhood with a dog and you see where their nose goes.

Your book shows the relationships between dogs and their humans. Is there one that stands out?

Talia is a girl in Queens who is autistic. She has a service dog that’s trained to stay with her. As she is getting older, holding her mother’s hand in public is not a cool thing to do. So now she has this dog to hold on to. I think dogs are anchors in a lot of different ways for all of us. But in this case, it almost seemed like a literal anchor to keep somebody calm and in place.

What can dogs teach us about city life?

No matter how completely different we are, if you have dogs in common it cuts through whatever else you might think would be a barrier. We’re different people, we come from different cultures, we speak different languages sometimes, and yet if there’s a dog in front of us, we can find a way to connect.

I think that’s true no matter what part of the city you’re in. We may not have the same kind of dogs, and we might not interact with them in exactly the same sort of way, but we can all understand each other by observing the bond that we have with our pets. 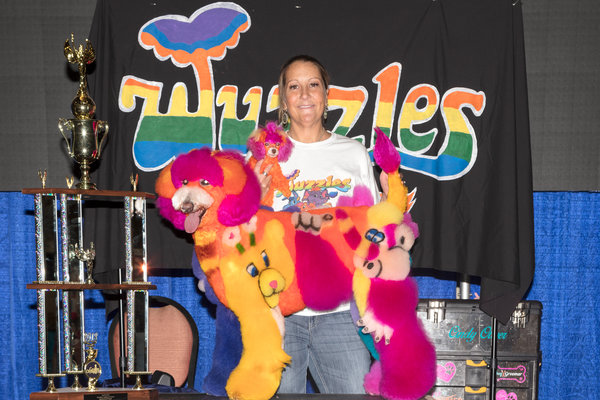 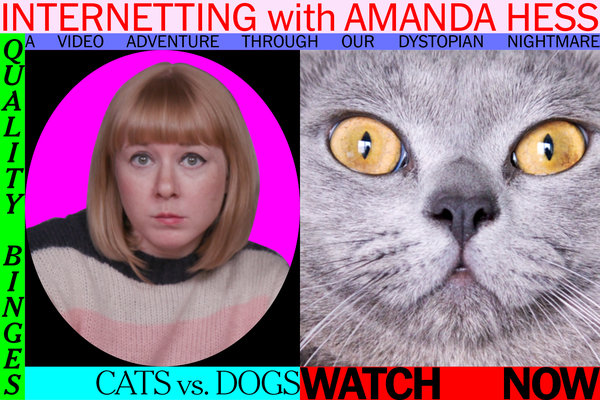 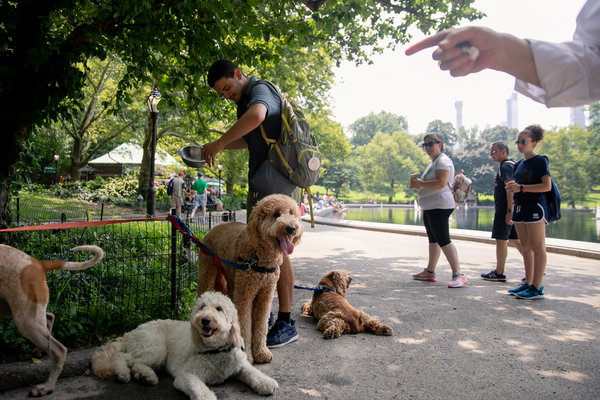 Winnie Hu is a reporter on the Metro desk, focusing on transportation and infrastructure stories. She has also covered education, politics in City Hall and Albany, and the Bronx and upstate New York since joining the Times in 1999. @WinnHu