He was living in Queens, and she was a police officer assigned to the local precinct. One day while she was out on patrol she stopped when she saw him washing his car. They began to chat, and she told him she was married.

“Not happily,” her partner shouted through the cruiser’s open window. Ms. Cincinelli, as it happened, was going through a contentious divorce.

Mismatched in appearance and age — he was burly, bald and just over 50; she was smaller and 20 years younger — Mr. DiRubba and Ms. Cincinelli became nearly inseparable. They got matching “’til death” tattoos on their left hands. He got one on his right that said “Valerie.”

As the relationship proceeded, getting bumpy at times, Ms. Cincinelli’s divorce dragged on. She was so angry about it that she began to talk of having her husband killed, suggesting that Mr. DiRubba arrange it. Then she had another idea, this one driven by jealousy.

“When she threw my daughter into the mix …” Mr. DiRubba said in an interview, his voice trailing off.

Within months, in May 2019, Ms. Cincinelli was charged with scheming to have her boyfriend pay a hit man $7,000 in gold coins to kill her husband and, while he was at it, to run down her boyfriend’s teenage daughter with a car. The boyfriend, federal prosecutors said, had gone to the F.B.I. instead.

The sensational accusations were irresistible to the tabloids, especially after Mr. DiRubba, who was not initially named as the boyfriend in question, emerged as the government’s central witness, one with a blemished résumé. (For an F.B.I. informer, he was fairly chatty with reporters.)

Eventually, the bizarre case faded from the headlines. This month it appeared to be ending quietly, with Ms. Cincinelli pleading guilty to obstruction of justice and the government dropping the two murder-for-hire charges she faced.

“I know what I did was wrong,” she said when she entered her plea. “I’m truly sorry, Your Honor.”

Through a spokesman, prosecutors declined to comment on the plea agreement. It came after her lawyer suggested that the hit man story had been fabricated by Mr. DiRubba — a scorned lover seeking revenge.

Mr. DiRubba, 56, disputed that, citing recordings he had made for the F.B.I.

“It’s Valerie’s own words that got her arrested,” he said in an interview.

By the time the two met, Ms. Cincinelli had been a police officer for a decade. She had spent much of her career at the 106th Precinct in Ozone Park, Queens, where she worked in a domestic violence unit.

She had two of her own: a daughter from an earlier relationship and a son with Isaiah Carvalho Jr., whom she married in 2015.

The marriage to Mr. Carvalho was troubled, court records show: She obtained orders of protection against him, and he was referred to an anger-management class. (His lawyer said that he was “completely innocent” of what Ms. Cincinelli had accused him of and that she had “set him up to gain an advantage in the divorce.”)

Then she met Mr. DiRubba.

Born in the Bronx and raised mostly in Westchester County, he was living in the section of Queens that local residents call Old Howard Beach. He was pleasant and talkative and mentioned having written a cookbook, according to a neighbor who expressed doubts about whether Mr. DiRubba had always been truthful.

The cookbook — a collection of recipes from Italian-American actors titled “Shut Up and Eat!” — is a point of pride with Mr. DiRubba. He also mentioned it in an interview during which he named several cast members of “The Sopranos” as friends. He said he had helped one of them, Tony Lip (who played the character Carmine Lupertazzi), write it. If so, his role is not acknowledged. (Mr. Lip died in 2013; his credited co-author, Steven Priggé, did not respond to a request for comment.)

Mr. DiRubba’s other business interests included a New Jersey bagel shop as well as a bakery and a tattoo parlor in New York’s Hudson Valley.

Steve Brescia, the mayor of Montgomery, N.Y., where the bakery was, recalled Mr. DiRubba as having a “good line of bull.” Mr. Lip appeared at the opening; Mr. DiRubba sold it after about a year.

A few years later, Mr. DiRubba teamed up with Chuck Zito, a former Hells Angels leader and celebrity bodyguard with a modest acting career, to open the tattoo parlor, in nearby Monroe, N.Y. Mr. Zito invested $100,000 in the business, TMZ reported.

Jim Purcell, Monroe’s mayor at the time, said the tattoo parlor arrived with some fanfare but did not last long: “All of a sudden, they were just gone.”

Mr. DiRubba offered few details about either business. (Contacted for comment, Mr. Zito declined. “Not interested,” he said via email.)

By 2017, Mr. DiRubba had settled in Queens and, he said, was making a living “building and flipping houses.”

Along the way, court filings show, she was disciplined by the Police Department amid accusations that she had shared confidential information with Mr. DiRubba. She was placed on modified duty and her gun was taken away. As with the murder-for-hire case, her lawyer said Mr. DiRubba had concocted the accusations to get back at Ms. Cincinelli.

Still, they continued to see each other and, according to Mr. DiRubba, Ms. Cincinelli remained fixated on keeping Mr. Carvalho away from her pension in the divorce.

As the divorce neared a resolution in January 2019, her talk turned especially dark, Mr. DiRubba said. 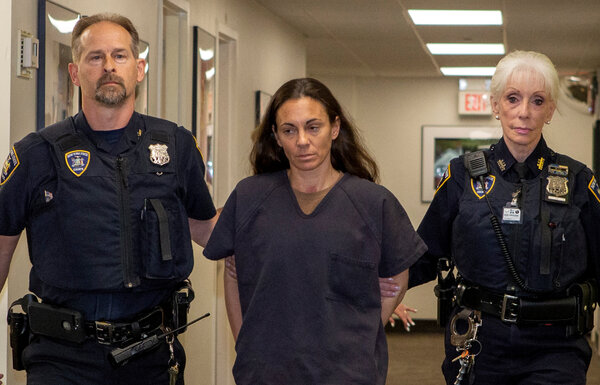 Ms. Cincinelli was also resentful of Mr. DiRubba’s teenage daughter and of the expensive things he bought her: Ugg boots, Louis Vuitton bags, Sephora makeup and “fake nails every week,” according to text messages cited by prosecutors.

When Ms. Cincinelli began to track the teenager via social media, Mr. DiRubba was alarmed. When she suggested having the girl killed, he decided to go to the F.B.I. It was February 2019.

Over the next several months, he recorded his conversations with Ms. Cincinelli, who he said was obsessed with true-crime television shows.

“She used to watch all the crime stories,” he recalled, mentioning the cases of Dalia Dippolito, a Florida woman convicted of trying to have her husband killed, and Amy Fisher, the Long Island teenager who shot the wife of her mechanic boyfriend, Joey Buttafuoco.

What happened on the morning of May 17, 2019, had the makings of its own true-crime drama.

A local detective went to Ms. Cincinelli’s Long Island home to tell her the police were investigating Mr. Carvalho’s death. Mr. DiRubba was also there, and a short time later, F.B.I. agents sent him a text message that was purportedly from the killer and included a picture of the supposed murder scene.

Mr. DiRubba showed Ms. Cincinelli the picture, and she told him they should align their alibis and delete the text exchanges from their phones.

But it was all a ruse: The authorities had staged the killing to catch Ms. Cincinelli.

In court filings, her lawyer offered a counternarrative, calling Mr. DiRubba an “inveterate liar” and a financial parasite who had stolen Ms. Cincinelli’s jewelry and used her credit card without permission.

Yes, some of what Ms. Cincinelli could be heard saying on the recordings was “troubling,” the lawyer, James Kousouros wrote, but the recordings also made it “palpably clear” that she did not believe the scheme was real.

Mr. DiRubba went to the F.B.I., Mr. Kousouros wrote, because it fit his pattern: Use false accusations as a “cudgel” to force her to take him back when she tried to break up with him.

In the weeks before Mr. DiRubba contacted the authorities, Mr. Kousouros wrote, Ms. Cincinelli had kicked him out of her house in a dispute over money. He texted to say that he would pay her to sleep on her couch and that he was expecting a payoff from his bookie. She took him back with an ultimatum: Repay what he owed her or get out.

After Mr. DiRubba did not pay and she kicked him out, Mr. Kousouros wrote, he “weaseled his way back into the house and began eliciting the statements made on the tapes.” (Mr. DiRubba denied Mr. Kousouros’s accusations and version of events.)

In court filings, Mr. Kousouros highlighted something else involving Mr. DiRubba that happened shortly before he informed on Ms. Cincinelli: He was charged with trying to steal a diamond ring from a jeweler.

While they were sitting in a parked car, according to court filings, Mr. DiRubba told the jeweler to leave the ring and get out. He told the jeweler he had a gun and was “connected to Gotti people.”

The case was resolved with Mr. DiRubba pleading guilty to the equivalent of disorderly conduct. It has since been sealed.

That, in essence, was Ms. Cincinelli’s defense. Her guilty plea amounted to an admission that she had destroyed evidence of a crime she insists she did not commit.

“This resolution was arrived at after an extensive investigation and an exhaustive review of the discovery in the case,” Mr. Kousouros said. “That investigation revealed that this was the appropriate resolution.”

Prosecutors said they would seek a five-year prison term when Ms. Cincinelli, 36, is sentenced in October. She has been in a federal jail in Brooklyn since her arrest and she resigned from the Police Department last month. She will not receive a pension.

Of the plea deal, Mr. Carvalho’s lawyer, Erica Sakol, said he had “peace of mind that this matter is progressing toward its conclusion” and believed Ms. Cincinelli had tried to hire a hit man and was “fully capable” of doing so in the future.

“Not a day goes by that my client doesn’t look over his shoulder,” Ms. Sakol said.

“No one’s a winner,” Mr. DiRubba said, reflecting on the outcome and adding that he was particularly concerned about the case’s effect on his daughter and Ms. Cincinelli’s children.

Asked how he was spending his time lately, he said that he was “just laying low” and that he’d had the “Valerie” tattoo inked over. He sounded rueful about where the relationship had led him.

“I thought I was being her knight in shining armor coming to her rescue,” he said. “It was more like tin.”

Your Questions about the New Adversity Score on the SAT, Answered