The public health workers were driving back from a vaccination site in rural Cave Junction, Ore., on Tuesday when they got stuck in a snowstorm on the highway.

They knew they had only six hours to get the remaining doses of coronavirus vaccine back to people who were waiting for their shots in Grants Pass, roughly 30 miles away. Normally, the trip takes about 45 minutes.

But with a jackknifed tractor-trailer ahead of them, the crew realized they could be stuck for hours and the doses would expire.

So the workers made the decision to walk from car to car asking stranded drivers if they wanted to be vaccinated, right there on the spot.

“We had one individual who was so happy, he took his shirt off and jumped out of the car,” said Michael Weber, the public health director in Josephine County, Ore.

Another recipient, he said, was a Josephine County Sheriff’s Office employee who had arrived too late for the clinic in Cave Junction but ended up stuck with the others on her way back to Grants Pass.

Most drivers laughed at the offer of a roadside coronavirus vaccine and politely declined, even though Mr. Weber said he had a doctor and an ambulance crew on hand to help oversee the operation. He acknowledged it was not the typical setting for a vaccination.

“It was a strange conversation,” Mr. Weber said. “Imagine yourself stranded on the side of the road in a snowstorm and having someone walk up and say: ‘Hey. Would you like a shot in the arm?’” 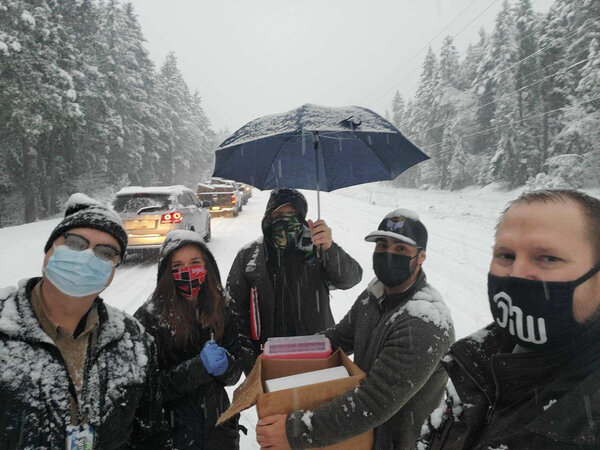 Mr. Weber called it “one of the coolest operations” he had ever been a part of and said it had been an easy decision to administer the shots on the highway.

“Honestly, once we knew we weren’t going to be back in town in time to use the vaccine, it was just the obvious choice,” he said. “Our No. 1 rule right now is nothing gets wasted.”

Eric Trump Will Comply With N.Y. Inquiry, but Only After Election