A missing dog has been reunited with his owners a year after disappearing in a touching video.

The dog, Conway, is shown seeing his family through a window in Highlands County Sheriff’s Office, Florida, before running up to them.

Owners Taylor and Emmitt Butts are seen dropping to the floor as they joyfully say hello to their pet for the first time in a year.

The video showed the pair embracing their pup with their two young children, as Emmitt wrapped his arms around Conway and kissed his face.

Conway went missing in Hardee County on November 11 last year, but was eventually located 10 months later thanks to microchip tracking.

He was found walking on a street 30 miles away from the family home in Sebring.

In the video, Taylor is heard laughing and crying whilst Emmit, addressing the officers, said: ‘Thank you, thank you so much.’

The Sheriff’s Office Facebook page said when he was found, Conway looked ‘skinny and exhausted’ and was ‘almost nothing like the healthy, happy dog he was when he went missing’. 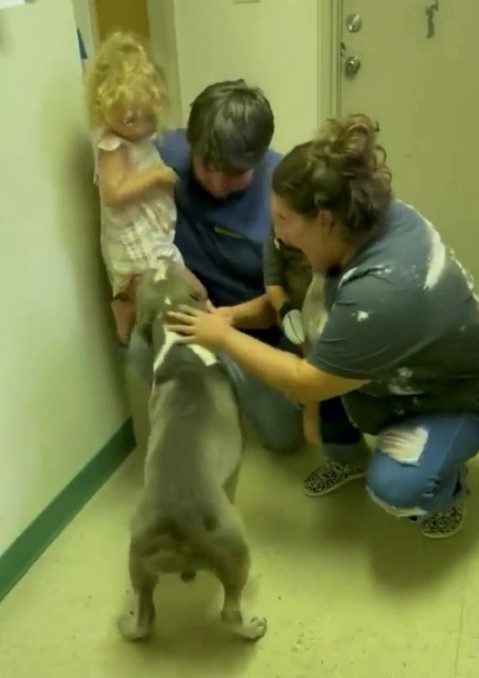 Both the family and the Sheriff’s Office said the reunion was ‘all thanks to the microchip’.

In a comment under the video Taylor said to viewers that their family ‘wasn’t the same with him gone’.

‘Rest assured, he will be getting many kisses, hugs and snuggles in his coming days and will never be out of our sight again,’ she said.

‘Someone stole from our house and sold him! November 11 would have been a year he was gone, so with being said, chip your babies and never lose hope!’

The Sheriff’s Office uploaded the video to their Facebook page, where they reiterated the importance of microchipping pets.

They said: ‘Because of that microchip, we were able to make this happen.

‘Please make sure your pets have microchips and that you keep the info updated.’