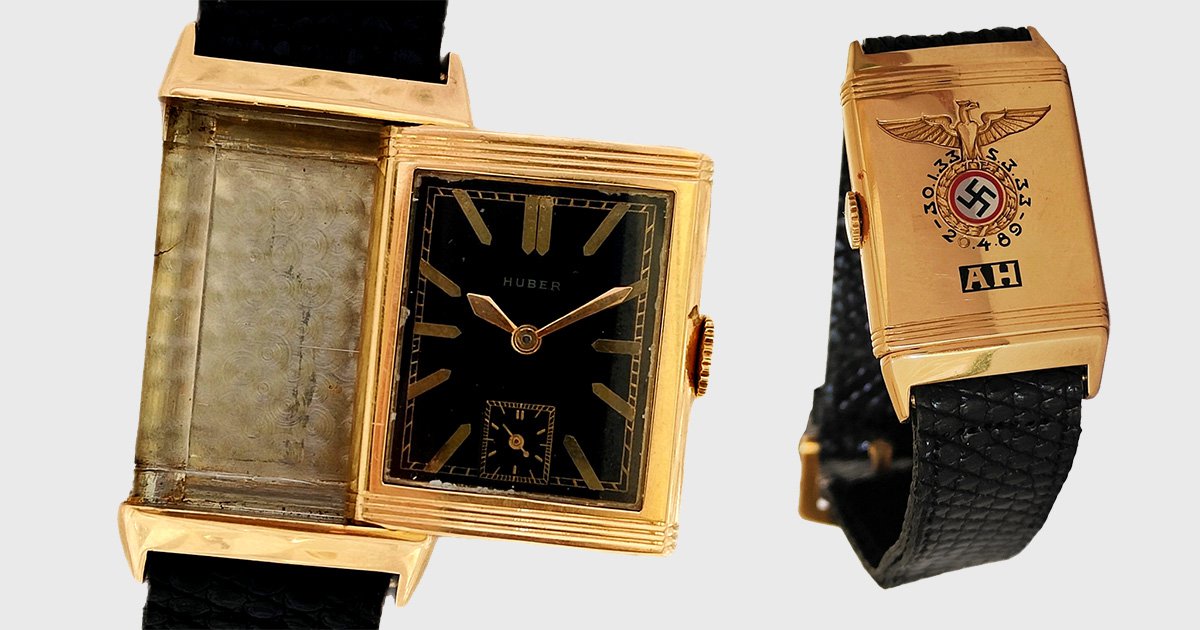 A gold watch that belonged to Adolf Hitler is set to fetch more than £3m at auction.

The timepiece was looted from the Berghof, Hitler’s mountain hideout, by a French soldier called Sgt Robert Mignot during the closing weeks of the Second World War.

It has stayed in the soldier’s family ever since but is now set to come up for auction with an estimated price tag of £3.4m.

The watch was manufactured by Swiss luxury watchmaker LeCoultre and features the Nazi leader’s initials, the Swastika and the regime’s notorious eagle.

It also bears three dates, Hitler’s birthday, the date he was appointed chancellor of Germany, and the date of the Nazi party’s 1933 election victory.

The watch will go under the hammer at Alexander Historical Auctions in Maryland, in the United States.

Bill Panagopulos, president of the auction house, said it was the first time a watch belonging to Hitler had been offered for public sale.

‘The watch was given to Hitler probably in 1933 after he was made chancellor of Germany and essentially gained full authority over every aspect of the administration of the country,’ he said.

‘It was given to him most likely by the Nazi party itself in recognition of his achievement and in thanks for elevating the party to power.’

Mr Panagopulos said while other items belonging to Hitler such as pieces of tableware, clothing and furniture had come up for sale in the past, the watch was was unique and came with ‘solid provenance’.

His unit, the Regiment de Marche du Tchad, had stormed the building slightly ahead of American troops but found it recently abandoned.

Soldiers looted whatever they could carry with Hitler’s personal effects being among the most prized souvenirs.

After bringing the watch back to France, Sgt Mignot later sold it to his cousin, whose grandson has now put the heirloom up for auction.

Mr Panagopulos has been keen to stress the auction is not intended to glorify the Nazi dictator.

‘We aren’t offering this in homage to the worst man who ever lived,’ he said.

‘It is instead an incredibly rare historic relic, deeply evocative of one of the darkest periods in world history and thus especially important.’

The watch face of the timepiece is reversible, allowing the case to be rotated, protecting the face and revealing the engraving.

While the components are from LeCoultre, the assembly and engraving of the device seems to have been completed by Andreas Huber, the official watch supplier to the Royal Court of Bavaria.

Mr Panagopulos said Jaeger-LeCoultre had no records pertaining to the watch, while any wartime documents from Huber were lost when their factory was bombed and burned down in 1944.

However, there is correspondence available with the Swiss watchmaker concerning the provenance of the timepiece.

A letter from Sgt Mignot’s daughter authenticating the watch is also included in the sale.

A defense lawyer and the judge suggest a congresswoman’s comments could offer grounds for appeal.