It’s been a challenging year for Soffiyah Elijah, the executive director of the Alliance of Families for Justice, an organization that supports New Yorkers with loved ones who are in prison. A recent Times report revealed that over the past year, incarcerated people had contracted the coronavirus at three times the rate as other Americans.

“If you think how hard it is to deal with a prison sentence, imagine how hard it is now,” said Ms. Elijah, who has been working on behalf of families and the criminal justice system for more than 40 years. After dealing last year with lockdowns and a lack of protective gear in prisons across the state, she is now focused on getting the Covid-19 vaccine to as many incarcerated New Yorkers as possible, following a recent ruling in late March by a judge in the Bronx.

It is not going as efficiently as she would like. “I’m concerned that the Department of Corrections and Community Supervision is not moving with deliberate speed to comply with the court order,” she said, adding that there are about 31,000 prisoners currently waiting for the vaccine.

Ms. Elijah, 65, lives in Prospect Heights, Brooklyn, with one of her two adult sons.

GIVE ME STRENGTH I get up somewhere between 3 and 4 in the morning. One of my friends says the older you get the less sleep you need. I’m not sure if that’s the reason. The first thing I do is a Kundalini yoga routine I’ve memorized.

Then I do qigong. There are several different varieties of qigong. I practice healing organ qigong, which is a set of different poses, each designed to optimize the flow of the life force to one of the five major organ systems: heart, liver, kidney, lungs, stomach/spleen, thereby strengthening and toning them.

SOME LIKE IT HOT About 5 in the morning, I treat myself to a sauna. I bought myself a mobile sauna because the sauna I love closed for Covid. It was something I really enjoyed. I don’t have the luxury of lying down in the mobile sauna, which I would do in the public sauna, but there are still important health benefits.

FIRST ONE IN I have a shower and a protein drink, and depending on how empty the cupboard is, it may be time to grocery shop. I go to the Park Slope Co-Op or Trader Joe’s. I’m standing there waiting when the doors open at 8 o’clock. I’m not someone who’s a big fan of waiting in line.

MAINTENANCE At my desk, I start with my to-do list for the Alliance. As executive director, one of my primary tasks is to maintain relationships with major donors. These are by and large people I’ve known for years. I’ll check in with them. I’ll send out thank you notes to donors if that hasn’t gotten done during the week. 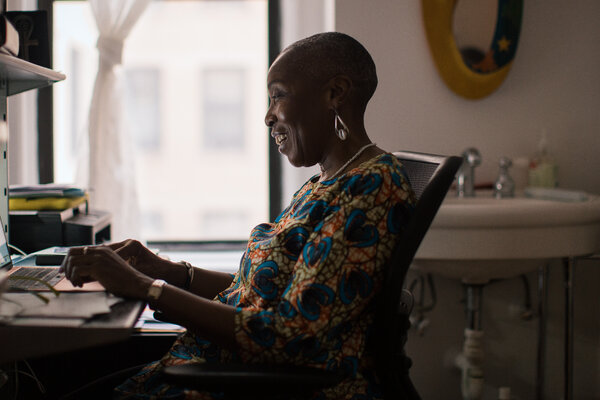 CONDITIONS, CONCERNS We work with about 500 families. People know how to get a hold of me. They’ll text me or email me about their concerns. When visits were happening, they’d contact me about guards not wearing masks or people being thrown in solitary. I always respond.

SOMETHING TO CELEBRATE It’s the organization’s five-year anniversary this year. We’re planning a panel discussion about the 50th anniversary of the rebellion and massacre at Attica in September. Our organization was founded in commemoration of that anniversary back in 2016. It’s a very important time of year for us. We’re also planning a spring poetry event — Danny Glover is our board chair, and we’re hoping to honor someone he’s friends with, Harry Belafonte. He’s someone who’s done a lot to move the needle for things we care about.

JUST ONE CHANNEL I may pause to cook or do some laundry. Friends will say to me, “You need to take a break,” but they’ve only ever known me on this channel. If I were to lie in bed and read a book on Sunday they would say, “Are you OK? Should we call a medic?”

DISH FAIRY I’m not really on a set schedule, but I try to finish work by 8. I don’t eat after 8, either. I’m vegan. For dinner I’ll make curry mock duck, barbecue tofu or a large salad. The only thing that’s important after that is making sure the dishes are clean. I like things orderly, and nobody’s ever come in and cleaned my house for me. If they have, I’ve never met them.

SOOTHING BEATS At night I might listen to music. I like reggae, R&B, and soca and salsa. There’s a D.J. I like called Ruben Toro, or I’ll listen to Felix Hernandez’s Saturday show on WBGO from the archives. I’ll drift off about 10.

Meet the Swing Voters Who Might Decide the 2020 Election