Josh Katz, a photographer and content creator, has just started his second big project of the pandemic.

The first, a book to be released in October, chronicles what he found during the lockdown last spring when he climbed to the roof of his building in Bushwick, Brooklyn. There, on his and other interconnected roofs, he discovered pigeon keepers, couples on dates and people break-dancing. Others were walking their dogs, singing karaoke, beating rugs, playing the cello and flying kites. “I immediately realized, ‘This is the scene,’” said Mr. Katz, who plans to donate all of his personal proceeds from his photography book to the nonprofit Doctors Without Borders.

Now he has turned his camera toward Lower Manhattan as the “explorer in chief” of the Downtown Alliance, a business improvement group.

The newly established three-month gig, which comes with a stipend and a suite in a downtown hotel, was supposed to begin last summer and promote tourism. Instead, Covid-19 hit, the residency was postponed for a year and its focus shifted to documenting the neighborhood’s emergence from the pandemic.

Mr. Katz has been meeting with local business owners who survived the year (12 percent of retail businesses in the neighborhood closed in 2020) and visiting downtown institutions like the National Museum of the American Indian. “It feels like I’ve been given the keys to the city,” he said. He has also been given the keys (or rather, the passwords) to the alliance’s Instagram and TikTok accounts, where he publishes stories and reels about his wanderings.

Mr. Katz, 25, got his start as a content creator at age 9, posting skateboarding videos on YouTube. Originally from Northern Virginia, he graduated from New York University in 2018 and made the city his home. When he finishes his residence at the Mint House at 70 Pine, a converted Art Deco office building, he plans to return to Bushwick.

CHUG AND SIT I get up around 8 and chug a glass of water. Because Sunday is such a lively day I want to be out, running around. The different days of the week don’t mean anything to me. Even before the pandemic it was like that; it’s the life of a freelancer. Except on Sunday morning I take a little extra time to stabilize before looking at my phone. I read for a half-hour, meditate, do some writing, just check in. I’ll be in the living room on the couch or a comfy chair.

NEW YORK CLASSICS When I interviewed for this job I asked for book recommendations. I’ve read through “Sleeping With the Mayor”; “City for Sale”; “Bright Lights, Big City”; “Low Life: Lures and Snares of Old New York”; and, of course, “The Power Broker.” I love urban planning and New York history books. As a street photographer, it helps with understanding how people approach the city. 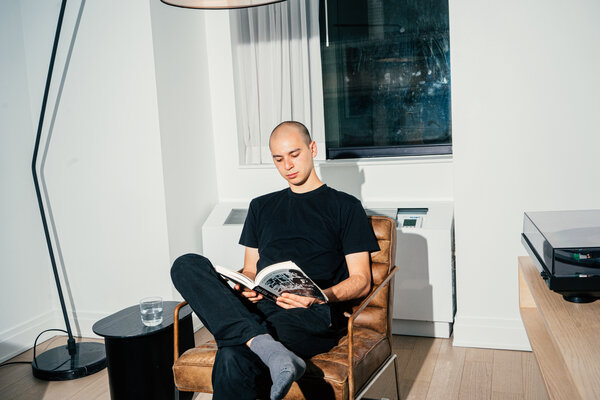 STONEHENGE ON THE HUDSON Here, you can’t help but look up. The light is almost always indirect, except at noon, but it’s bouncing off the walls and windows and creating fascinating patterns and little light baths on the street. I just feel like I’m in a city from the moment I walk out the door.

OBSERVATION, WITH EGGS I never miss breakfast. I’ll go to a local haunt, like George’s, which is close to Battery Park City and the 9/11 Memorial & Museum. It’s been around since 1950. There’s so much life in a diner on a Sunday morning. In a spot like that there’s eavesdropping to be done. I love eating alone. I’m observing. I try not to touch the phone when eating, I’m trying to be present. If I’m with someone, we’ll get eggs and pancakes and split both.

THE AGENDA We’ll try and schedule two to three shoots a day. I have a list of businesses I want to check out; there’s a fire hose of content ideas. The other day I went into every I Love New York shop down here. This week I’m going to the delis. The little bits of time between meetings and shoots are when I’ll poke around.

CITY DISCOVERIES There was a dude with a huge cigar joy-riding back and forth on the Staten Island Ferry. He carries around disposable shot glasses and bourbon and poured us shots to share. People like that are so exciting to me.

DOWNTOWN CHARACTERS I’ve been shadowing some of the alliance staff, like a member of the staff who does sanitation. His name is Blue. He usually runs the Billy Goat, a massive street vacuum machine he pushes like a lawn mower. They clean up last night’s mess and see everything before the rest of us do. I shadowed a bus driver — they have their own bus line. It’s a little ecosystem down here.

POPULATING I’m sure Lower Manhattan is not as full as it once was, but there’s a lunch rush hour now and lines to get into places. On weekend mornings at the Battery, the lawns are full of people playing football, people doing silent discos with their headphones on. I prefer to do that in private.

THE VIEW FROM ABOVE I had the opportunity to go to the observation deck at 70 Pine. It cost 40 cents in 1939 but hasn’t been open in years. One World Observatory is a little more expensive, but they make it into a hell of an experience.

NOODLES AND MILK TEA A Uyghur restaurant opened on Water Street during the pandemic. There’s a wooden counter and window into the kitchen so you can watch a woman in the back folding noodles. I’m vegetarian and sometimes it isn’t great ordering Chinese cuisine, but they left out the meat in a couple dishes for me and it was still insane.

EDITS Ideally, I’ll stay out until after sunset. I could come back and go bowling. But more realistically it’s hours and hours of editing. I could take 1,000 photos in a day; storage is cheap and I’m shooting digitally. I err on the side of saving.

THE ONLY WAY I read before I go to bed. Right now I’m reading a Diane Arbus biography — it’s the one by Patricia Bosworth. She was one of the innovators. The book is all text. Reading myself to sleep — that’s the only way to do it.