[Race/Related is available as a newsletter. Sign up here to get it delivered to your inbox.]

NATCHEZ, Miss. — When driving through Natchez, Miss., a town popular with tourists, it is easy to overlook an awkwardly shaped patch of land, only modestly marked by a few signs, free-standing exhibits and shackles cemented in the ground.

But from 1833 to 1863, the land, Forks of the Road, was among the largest slave markets in America. And now, local historians, residents and officials are celebrating its recognition as a new national historical park site.

Once long forgotten by many outside the region, Forks of the Road was where tens of thousands of enslaved men, women and children were taken to work in homes and plantations. The domestic slave trade was such a central feature of the nation’s economy, and it made millionaires out of many Natchez residents.

In an emotional ceremony late last month in which the city donated nearly three acres of land to the National Park Service, officials unveiled a large National Park Service sign that now marks the acknowledgment that residents and many outside the region said was a long time coming: “Forks of the Road, Natchez National Historical Park.”

“History is not always pleasant, but it’s important that history be told, all of it,” and particularly in this moment in America, said Dan Gibson, the mayor of Natchez. He was elected in July 2020, as thousands of people were marching in streets across the nation to protest systemic racism and police brutality in the wake of George Floyd’s murder.

“It’s a sad story,” he said of the history of Forks of the Road. “And I think for many years, there are some who would have been satisfied to see that story forgotten. But how can you forget it?”

Many of the descendants of those once enslaved in Natchez — a majority-African American city of about 14,600 residents — still live in the area, Mr. Gibson said, and deserve to have their contributions to the history of Natchez finally recognized.

A federal law passed in 2017 authorized the Natchez National Historical Park, an 18.5-acre site, to preserve and interpret the Forks of the Road plot, and there are plans to build an educational visitor center and a memorial or monument.

In his keynote speech at the June 18 ceremony, the day after President Biden signed legislation making Juneteenth a federal holiday, Senator Roger Wicker, Republican of Mississippi, acknowledged that the country had been the “the greatest experiment in democracy and freedom that’s ever been known around the globe. But it’s also been a work in progress.”

He noted the irony of the historical street names that bound the location of the Forks of the Road — at the corner of Liberty and Washington. “I wonder if it dawned on the people participating there, what was done,” he said.

Kathleen Bond, the superintendent for the Natchez National Historical Park, oversaw a study that paved the way for congressional support of the site. Its significance, she said, is “an opportunity to tell the truth.”

“I’m a great believer in paradox, that you can hold things that seem contradictory, but you don’t have the truth unless you’ve got the whole, all the sides of it,” Ms. Bond said. “I mean, you can’t be here in Natchez without seeing the beautiful architecture and the beautiful furnishings that remain, after more than 150 years. But that was a beauty that was built on an atrocity of violence and suffering and torture.” 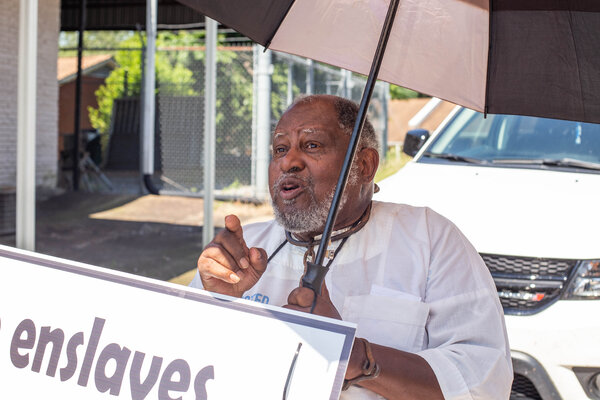 Residents agree that this milestone was reached because local historians saw an opportunity and worked diligently to ensure its reality.

For more than two decades, Ser Seshsh Ab Heter-CM Boxley, plus the Friends of the Forks of the Road Society Inc., lobbied for the preservation of the site and a new, more complete telling of its history, which includes remembering its role in the Civil War.

During the war, Colored Troops soldiers serving at Fort McPherson, the Union’s post in Natchez, leveled the Forks of the Road and used lumber from the slave pens to fortify its holding.

Ser Boxley, who was raised in Natchez but then lived in the San Francisco Bay Area for 35 years after high school, observed upon his return in 1995 that the city’s tourism industry made it look as if white people had done “everything all by themselves.”

“I decided that I needed to do something,” he said. So he looked for a site “that spoke to a people’s history.” The Forks of the Road was that site.

Its significance is not limited to Black people, he said, but is part of a more complete telling of the region’s history.

“I think this will build more unity here, but it will also bring more tourists here,” he continued. “And it will also give people a sense of belonging that I believe is long overdue.”

Natchez has long been a tourist attraction, with its views of the Mississippi River and opulent mansions, but visitors crave the full story of the town. And the community “wants to tell that story,” said Devin Heath, the executive director of Visit Natchez.

“How do we go forward together as one community?” he said, adding that the descendants of the owners of the antebellum mansions weren’t the ones who owned those who were enslaved, “they’re telling the story of the home.”

“Several of them have reached out to me and said, ‘We want to be a part of telling the complete story, we just need the resources and support,’” Mr. Heath said. “And so what we’re doing is trying to create that kind of environment where they’ll have that information.”

Felicia Bridgewater-Irving, a city alderwoman who lives close to the site and whose district includes Forks of the Road, said she often sees visitors there. “If you ever visit there,” she said, “you’re emotionally filled with what has taken place.”

Acknowledging that history, she said, makes it easier to move forward.

Her colleague, Valencia Hall, a city alderwoman who grew up in Natchez during the Jim Crow South and whose ancestors include Colored Troops there, said she was very proud to see Forks of the Road become a National Park Service site.

“It tells us how far we have come in race relations,” she said, showing a way “to honor one another as human beings, as people with humanity, with dignity and honor.”