The phone call came earlier this month, not long after Corey Johnson made his surprise late decision to join the New York City comptroller’s race.

It was a message delivered on behalf of Representative Jerrold L. Nadler, New York State’s most senior House member, and it was hardly a welcome-mat rollout: Would Mr. Johnson, the City Council speaker, reconsider his decision to run?

Mr. Nadler, whose congressional district overlaps with Mr. Johnson’s, had already given his endorsement to Brad Lander, a progressive councilman from Brooklyn.

“Brad really wants the job,” said Mr. Nadler, adding in an interview that he was unaware of the call, which was made by a senior staff member. “It’s not a second job because he dropped out of anything.”

For much of last year, Mr. Johnson was considered a leading candidate in the 2021 mayor’s race. He dropped out in September, citing the toll that the isolation of the coronavirus pandemic had taken on his mental health. Doing his job as the leader of the City Council while running for mayor would be too much, he said.

But by February, Mr. Johnson said his mental health had significantly improved, and he concluded that he wanted to run for city comptroller, partly because he thought he was best qualified to help guide the city’s recovery from the pandemic.

Like the race for mayor, the contest for comptroller may be the city’s most consequential in decades, and the June 22 Democratic primary will most likely decide its winner. One of only three citywide elected positions, the comptroller is the fiduciary for five pension funds that are valued at $248 billion and cover almost 620,000 people. The office is responsible for approving public borrowing, serves as the city’s chief auditor and reviews tens of thousands of contracts.

Those roles will be even more important given the financial difficulties caused by the pandemic. The city had a 20 percent unemployment rate, and is still projecting hefty future budget gaps. The comptroller will have an important role in overseeing how $6 billion in federal stimulus is spent.

“The next comptroller will be the eyes and ears of how the mayor brings back the economy,” said Scott M. Stringer, the current comptroller, who is running for mayor. “We’re on the edge.”

The late entry of a well-known Democratic contender into the comptroller’s race bears similarities to the 2013 contest. Mr. Stringer, then the Manhattan borough president, was the front-runner after he — like Mr. Johnson — dropped out of the race for mayor. The former governor Eliot Spitzer, who had resigned from office after a sex scandal, then entered the contest late — like Mr. Johnson. Mr. Stringer prevailed in a close primary election.

This year’s contest had seemed to revolve around four elected Democratic officials: Mr. Lander; Brian Benjamin, a state senator representing Harlem and the Upper West Side; Kevin Parker, a state senator from Brooklyn; and David Weprin, a state assemblyman from Queens. 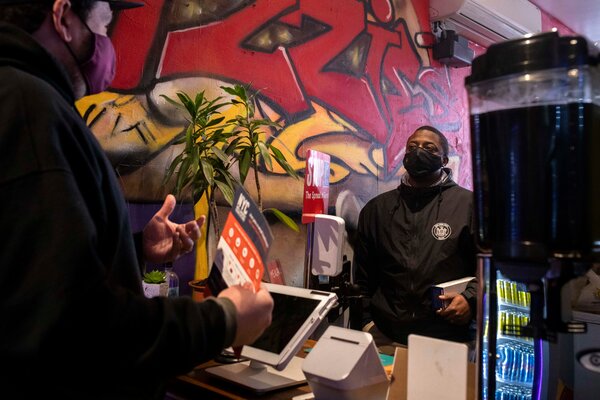 Two newer candidates, Michelle Caruso-Cabrera, a former CNBC anchor who ran in a congressional primary against Representative Alexandria Ocasio-Cortez, and Zach Iscol, a nonprofit entrepreneur and former Marine who dropped out of the mayor’s race, recently joined the race. But neither has affected it in the way Mr. Johnson has.

“He will have the same disruptive effect on the comptroller’s race that Andrew Yang had on the mayor’s race,” said Representative Ritchie Torres of the Bronx, who has endorsed both men. “Corey’s a juggernaut given his overwhelming name recognition and fund-raising.”

Upon entering the race, Mr. Johnson immediately announced the endorsements of three fellow Council members, and the head of the Hotel Trades Council showed up at Madison Square Park, where Mr. Johnson announced his bid, to endorse him in person. District Council 37, New York City’s largest public sector union, recently gave Mr. Johnson its endorsement, which would otherwise have gone to Mr. Benjamin, according to multiple sources.

“No disrespect to Brian because he is a rising star within the party, but Corey’s experience, having led the City Council and having worked with us, changed the dynamics of this race,” said Henry Garrido, the executive director of D.C. 37.

And yet, Mr. Lander may be the candidate with the most to lose from Mr. Johnson’s entry.

Mr. Lander has been planning a run for comptroller since shortly after he was re-elected to the City Council in 2017. He is a co-founder of the City Council’s progressive caucus who wrote of his privilege as a white man. He was recently endorsed by Senator Elizabeth Warren of Massachusetts, and he might be the only person in New York City who speaks gleefully of having met recently with every living former city comptroller.

His plans to use the office to address climate change and ensure an equitable recovery from the pandemic earned him early endorsements from unions, progressive groups and politicians such as Representative Jamaal Bowman and Tiffany Cabán, a candidate for the City Council who nearly pulled off a long-shot campaign for Queens district attorney.

But at least two endorsements that Mr. Lander was expecting were withheld after Mr. Johnson’s announcement.

Mr. Lander has responded with an aggressive effort to counter Mr. Johnson. His campaign released a list of endorsements from transportation advocates, some of whom had previously supported Mr. Johnson for mayor. One of Mr. Johnson’s signature proposals as speaker was a master plan to upgrade city streets, bike lanes and pedestrian spaces, which the City Council approved in 2019. In early March, Mr. Lander unveiled a list of endorsements from leaders in the L.G.B.T.Q. community. Mr. Johnson is openly gay.

“Attention to the race is good,” Mr. Lander said, while soliciting petitions to get on the ballot. “This is a very high-stakes moment for the city. We need leaders who have shown up for this crisis and are prepared for the job.”

Part of Mr. Johnson’s difficulties last summer followed the City Council’s failure to cut $1 billion from the Police Department budget and shift the money toward social services, as he had promised to do in the wake of the protests spurred by the killing of George Floyd.

“When the chips were on the table, he folded,” said Jonathan Westin, director of New York Communities for Change, a progressive advocacy group for low- and moderate-income New Yorkers that has endorsed Mr. Lander. “It leads to the question of how capable he will be in standing up to those massive forces pushing back against progressive change as comptroller.”

The anger among advocates of the police budget cuts was palpable: Protesters gathered outside Mr. Johnson’s boyfriend’s apartment building, and it was vandalized.

“It was hard last spring and last summer and early fall,” Mr. Johnson said. “But I don’t feel like I’m anywhere near the place I was because I took the time to focus on myself and my well-being and my recovery.”

Mr. Johnson said he had been feeling healthy for months when in February colleagues and union leaders began encouraging him to enter the race.

“I know the city’s finances better than anyone after negotiating multiple budgets and serving as speaker,” Mr. Johnson said. “I feel ready to be the city’s chief financial officer.”

As of the most recent filing period, Mr. Lander had $3.4 million on hand, double the $1.7 million Mr. Benjamin had in his account, and was on his way to reaching the $4.5 million spending cap. Mr. Johnson, based on his fund-raising from the mayoral race, will most likely receive the maximum $4 million matching-funds payment, automatically placing him at the spending cap without his having to make a single fund-raising call. Mr. Lander is also likely to raise the maximum allowed.

Helen Rosenthal, a Manhattan councilwoman who dropped out of the race for comptroller and endorsed Mr. Johnson, noted that he had negotiated three budgets while prioritizing reserves that the city was able to use during the pandemic-induced economic downturn.

“When he was negotiating the budget, everything was coming at him,” Ms. Rosenthal said. “People were throwing paint at his boyfriend’s door. It was too much.” She added, “If any of the candidates want to say, ‘I know this budget inside and out,’ it’s Corey who actually does.”

Mr. Benjamin, who earned degrees from Brown University and Harvard University, and worked as an investment adviser at Morgan Stanley, may benefit if the battle between Mr. Johnson and Mr. Lander turns off voters, or compels some to list only one of them in ranked-choice ballots. His campaign is focusing on communities of color and the thousands of pension-fund retirees who still live in the city.

Want to Adopt a Wild Horse? The Government Will Pay You $1,000