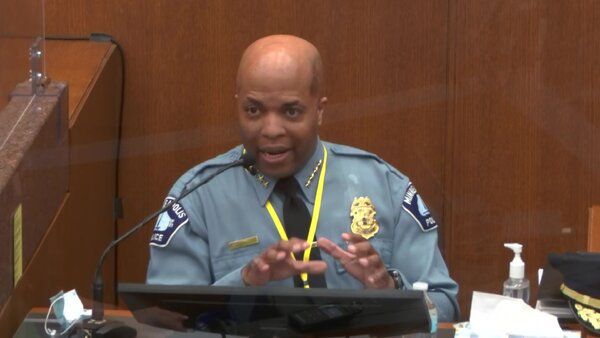 The Minneapolis Police Department’s initial inaccurate and misleading description of George Floyd’s death last May “might have become the official account” of what took place, had it not been for video taken by a teenage bystander, Keith Boykin, a CNN commentator, wrote on Twitter.

The video, taken by Darnella Frazier, emerged the night of Mr. Floyd’s death and drove much of the public’s understanding of what took place. Chief Medaria Arradondo of the police department testified at Mr. Chauvin’s trial that within hours of Mr. Floyd’s death he received a text from a local resident telling him about the video.

Later, Chief Arradondo, who testified as a witness for the prosecution at Mr. Chauvin’s trial, praised Ms. Frazier for her actions.

After the guilty verdict was announced Tuesday afternoon, Mr. Boykin and others on social media recirculated the police department’s initial account of events. To many, it was further reason not to place full trust in the narratives offered by police officials, and underscored the need for independent video of police actions.

“Seriously, read it again knowing what we know,” Jake Tapper, the CNN host, wrote on Twitter.

The initial news release, posted on the police department’s website, is titled “Man Dies After Medical Incident During Police Interaction.” It said Mr. Floyd, who was not identified by name, “physically resisted officers” on the scene who had ordered him out of his vehicle. “Officers were able to get the suspect into handcuffs and noted he appeared to be suffering medical distress,” the release said.

The officers called for an ambulance and Mr. Floyd was taken to the Hennepin County Medical Center, where he died, it said.

Then, in a separate one-sentence paragraph, the department said, “At no time were weapons of any type used by anyone involved in this incident.”

State officials were investigating the episode and body cameras had been activated, the release said. It also noted, “No officers were injured in the incident.”

Police officials from major cities across the country, who usually support each other especially in times of crises, welcomed the verdict against a former member of their ranks.

Chief Troy Finner of the Houston Police Department said, “Sometimes justice takes a little while, but it’s going to get there.” He added, “If there is anybody in the city who wants to celebrate, we are going to be there with you.” But, he said, “Do it the right way.”

In Seattle, the police department said, “Mr. Floyd’s murder was a watershed moment for this country” and added: “From that pain, though, real change has begun.”

And in Oakland, Calif., the police department called for people to be “compassionate, empathic, and forgiving.” It also said, “Together we will work towards rethinking policing in America.”

Last year, Ray Kelly, who retired in 2013 after serving 12 years as the New York City police commissioner, told The Wall Street Journal, “This is the worst act of police brutality that I’ve seen.”

Is the US still Asia’s only military superpower?