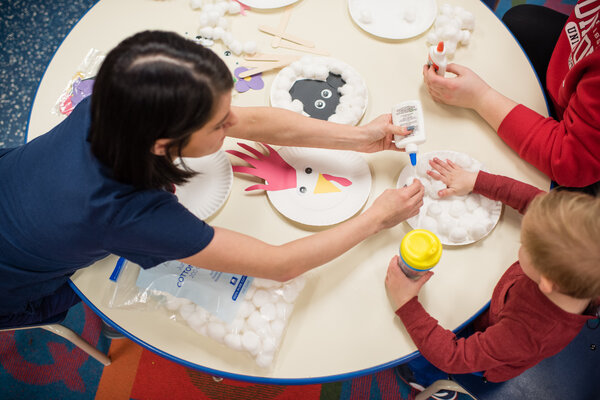 On Election Day, Multnomah County, which includes Portland, Ore., passed one of the most progressive universal preschool policies in the nation.

The measure, to be paid for by a large tax on high earners, will provide free preschool for all children ages 3 and 4, in public schools and in existing and new private preschools and home-based child care centers. It will also significantly raise teachers’ wages so they are equivalent to those of kindergarten teachers.

It seeks to overcome the central problem in early childhood care and education: It is unaffordable for many families, yet teachers are underpaid. The solution, Multnomah County voters decided, is to finance preschool with public funding instead of private tuition, and to pay teachers much more.

It also seeks to overcome some of the pitfalls of universal preschool policies in places like New York and Washington, D.C. In doing so, early childhood researchers say the policy could serve as a blueprint for the rest of the country.

“This was focused on access to quality preschool, so when children enter kindergarten, they are able to succeed,” said Jessica Vega Pederson, a county commissioner and a chairwoman, with Sahar Muranovic, of the measure’s steering committee. “And to do that, we needed to raise wages.”

Caregiving has become a much more politically salient issue. The closings of schools and child care centers because of the coronavirus made clear the extent to which the sector underpins the economy. Joseph R. Biden Jr. has made caregiving a central part of his economic plan, including universal preschool, and better pay and benefits for teachers. On Election Day, early education ballot initiatives also passed in St. Louis, San Antonio and Colorado, which approved universal pre-K for 4-year-olds.

Child care is the largest expense for many families, and yet educators — who are disproportionately Black and Latino women — earn an average of $12 an hour, according to the center for the study of child care employment at the University of California, Berkeley. Half rely on public assistance. Even when they have the same education, preschool teachers earn half of what kindergarten teachers do, the center found.

Low-quality preschool, though, can be worse than none at all. Yet it costs a lot of money to run a high-quality program. And some of the things it requires — like highly trained teachers and low turnover so teachers can develop relationships with children — are hard to achieve without raising teachers’ pay.

The Multnomah County measure will pay preschool teachers roughly the same as public kindergarten teachers — around $74,000 a year for lead teachers, up from $31,000. Teaching assistants will earn about $20 an hour. The measure will eventually raise $202 million a year from taxpayers. It plans to add an estimated 7,000 preschool spots and hire 2,300 teachers.

“Teacher pay versus affordability is the major crisis all across the child-care landscape,” said Dan Wuori, director of early learning at the Hunt Institute, an education policy research group affiliated with Duke University. “We’ve had this broken system for decades, where quality is sometimes lacking and the affordability of the system for families is really subsidized on the backs of a low-income work force, many of whom are women of color.

“On paper at least, this measure addresses both of those concerns.”

The policy draws on recent early education research and tries to avoid the unintended consequences that have befallen other universal preschool programs.

For example, discrimination in discipline starts as early as preschool, research shows, and Black boys are much more likely than other children to be suspended or expelled. The measure forbids expulsions from preschool, and provides training for how to address challenging behavior instead.

Another example: Public pre-K in places like New York and Washington, D.C., has ended up decreasing the supply of infant and toddler care programs. The Multnomah County measure aims to prevent that by paying providers to maintain those programs.

Universal programs, though, are more politically popular and, research shows, have more benefits for children. They are less segregated, and children learn from spending time with peers from different socioeconomic and racial backgrounds. The programs are more effective, most likely because they are held to higher standards and families become more invested in them, according to research by Elizabeth Cascio, an economist at Dartmouth.

Another debate in early childhood policy is whether teachers should be required to have college or equivalent degrees. When they do, it’s associated with high-quality care and teaching — but evidence suggests that it’s not enough on its own, and backfires if not coupled with higher pay. Otherwise, it shrinks the work force and makes it more white at a time when the student population is becoming more diverse. Research has found that when children have teachers of the same race, it can benefit their behavior, academic growth and motivation.

The Multnomah County measure requires that lead teachers have a college degree or its equivalent, and that assistants have an associate degree in child development. But it gives current teachers time and money to earn the qualifications, and includes a plan to partner with local colleges to train new teachers.

“Other communities realized the work force problem and are always chasing after that,” said Megan Irwin, a consultant who worked on the policy. “We built it from the beginning.”

Another lesson for other states or localities, local organizers said: The policy was devised by a large and diverse group, including parents, child care providers and economists. It merged two measures from different groups — one a volunteer campaign and the other backed by a county official and a social venture investment group. The process was messy, but by including so many groups, it addressed their needs early, they said.

“Tax the rich” was a tagline for the campaign by one of the groups behind the measure, the Portland chapter of the Democratic Socialists of America.

Of course, Portland is known as a progressive bastion, and in other communities “tax the rich” may be a political drawback rather than a selling point. But even if other places choose to finance universal preschool in a different way, researchers said, there is growing bipartisan support for the goal. Results would be results, and if Multnomah County’s policy worked well, they said, it could become a national model.

The ‘controlled chaos’ of raising sextuplets