Andrew Rannells got his first break on Broadway — as an understudy in “Hairspray” — seven years after moving to the city from Omaha, Neb. Since then, the 40-year-old actor has performed in shows like “Hedwig and the Angry Inch” and “Hamilton,” received Tony Award nominations for his performances in “The Book of Mormon” and “Falsettos,” and co-starred on the HBO series “Girls.” Now he plays a Wall Street newcomer on the Showtime series “Black Monday,” a dark comedy about the 1987 stock market crash. And this month will see the publication of his memoir, “Too Much Is Not Enough: A Memoir of Fumbling Toward Adulthood.” After sampling neighborhoods like Brooklyn Heights, Astoria, Queens and Harlem, among others, Mr. Rannells is now firmly planted in Chelsea, where he recently bought an apartment.

INDULGE It depends on what happens Saturday night, but I usually wake up, I’m going to be honest with you, between the 9 and 10 o’clock hour. If I wake up closer to 10, I feel a little guilty. I look at my phone. My whole family is out of town — they all live in Omaha — so it’s a quick checkup, like how’s everything? Then I go to make coffee in my kitchen with my little espresso maker. 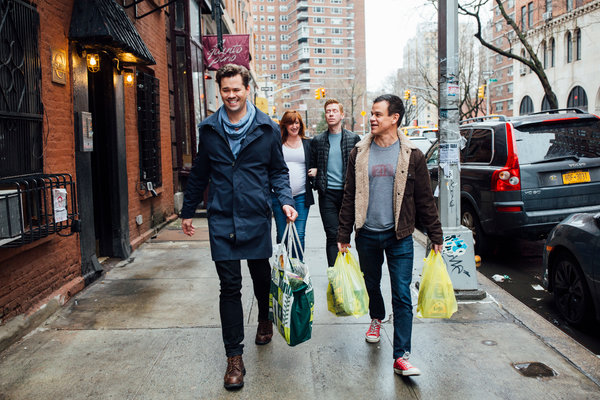 IT’S THE THOUGHT THAT COUNTS After coffee, I will attempt to go to the gym. It’s nearby, so I feel like I don’t really have any excuse to not do that. I’ll do some sort of halfhearted workout. Sometimes if I’m really feeling like ambitious, I’ll actually do a proper workout. I turned 40 this year, so.

KEEP IT CLEAN Or there’ll be some sort of television watching. I’ve been watching “The Ted Bundy Tapes.” I’ll watch “90 Day Fiancé,” which is a show Casey Wilson and David Caspe — David, who created “Black Monday,” and Casey, my co-star — they both love it and were like, ‘You’ve got to get on board with this.’ So I got on board. Sometimes I’ll do household chores. I love a Swiffer. I use a Bona for the hardwood.

TOGETHER AGAIN Generally speaking, the activity on Sunday is brunch. A lot of times it ends up being the people that I had dinner with on Saturday night. I have a lot of really good friends who live in this neighborhood. We just can’t get enough of each other.

LOCAL CUSTOMS We start at 1. Do you know what a Greyhound is? It’s grapefruit and vodka. That’s what’s going on at brunch. Some light day drinking — what’s wrong with that on a Sunday? We’ll usually pick someplace nearby. Cookshop has a very good huevos rancheros. Empire Diner has a really good avocado toast, which is something I never thought I would eat until I stayed in Los Angeles too long. Then all of a sudden it was like, I guess I’m going to eat avocado toast now.

RECOGNITION I like L.A., but my friends are here. Broadway is here. I can’t really ever go too far. I used to walk around and not get recognized. “The Book of Mormon” sort of changed that. The funny thing is that it depends on the neighborhood. When I lived in Hell’s Kitchen, it was like, “Oh, he’s that boy from ‘The Book of Mormon.’” In the East Village, people were like, “Oh, it’s that guy from ‘Girls.’” If I’m in the airport in the Midwest, without fail people will be like, “Were you on ‘How I Met Your Mother’?” I was; I did two episodes.

SHOPPING FOR IDEAS I bought a new apartment, so the last couple of post-brunches have turned into shopping trips — walking over to where West Elm is, going over to ABC, a few of those vintage stores on 17th Street. It’s just sort of traipsing around — shopping for ideas, we say, although sometimes I will pull the trigger and actually buy something. Then we go back to one of our homes or — it’s going to seem like a cry for help — to another bar. Tipsy Parson is very good, on Ninth Avenue.

GROUP DECISION At like 5, 6 o’clock, it’s like, how are we all feeling? Should we order something — or do we split up? Is there something to watch on television as a group? If we’re watching something, there will be some sort of dinner order, like Grand Sichuan or Don Giovanni. Around 9 o’clock, it’s time to wrap it up.

PILLOW, PODCAST I’ll be in bed by like 10:30, 11. I’ll try to make myself go to sleep or listen to a podcast, although sometimes that’s not conducive for sleeping. I just listened to “The Dream,” about pyramid schemes. It’s really good but it kept me engaged, so I was like, “I’m not going to fall asleep.” My final thoughts are generally, “That was a good day.”

Canada warns US not to politicise extradition cases