Home » Americas » How Did Race Play on Election Day? ‘Near Civil War-Like’? Or ‘It Really Didn’t Matter’?

When Joe Neguse discussed his newborn child on the campaign trail in his congressional race in Colorado, he found himself empathizing with constituents concerned about early education for their own children.

In his chats with millennials, the conversation inevitably veered toward their worries about student loan debt, which, as a 34-year-old who went to law school, is a reality for Mr. Neguse as well.

And when he talked to potential voters about his parents’ journey to the United States, people often recalled their forebears’ struggles upon arriving at Ellis Island.

“As I talked about my experiences on the campaign trail based on who I am and my family’s story, it resonated with broad swaths of folks,” said Mr. Neguse, whose parents were refugees from Eritrea. And so it was that Mr. Neguse, a black state regulator, won the election this week in a House district that is more than 90 percent white and became Colorado’s first black congressman.

Mr. Neguse stands among a slate of minorities around the country, mostly Democrats, who won congressional seats in predominantly white communities, some of which had never elected a black representative. While the victories might cast a sliver of sunlight, the reality is, in the aftermath of many bitterly fought campaigns that stoked racial fears among white people, the country remains deeply divided on race.

To some voters, the history-making minority candidates who won in midterm elections this year signal a growing sense of justice in an ever diversifying nation. Nearly three out of four midterm voters said that electing racial and ethnic minorities was important, according to CNN exit polls.

On the other hand, there was massive turnout and enthusiasm among a Republican base motivated by a campaign that included racist attacks — robocalls referring to a black female gubernatorial candidate as “a poor man’s Aunt Jemima;” a white gubernatorial candidate warning voters not to “monkey” things up by electing his black opponent; presidential warnings about a caravan of Latin American migrants supposedly teeming with criminals headed toward the United States.

“This is near Civil War-like in terms of the fight in this country,” Steve Phillips, a Democratic fund-raiser, said of the racial divide evident in the electoral outcomes. 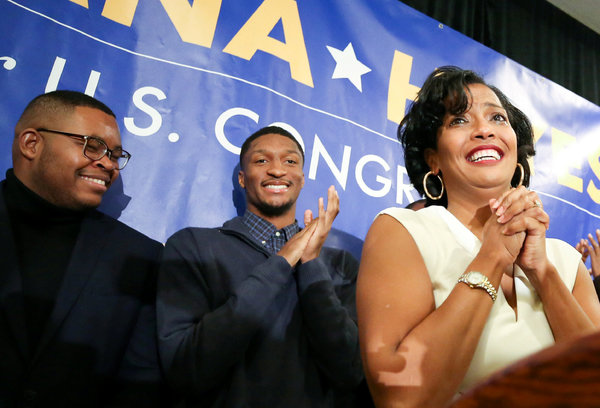 Not long ago, it seemed that both Democrats and Republicans were looking to embrace the country’s growing diversity. After President Barack Obama won re-election in 2012, Republicans performed a party “autopsy” that concluded, among other things, it needed to do a better job appealing to minority communities.

But with the rise of President Trump, those appeals have taken a back seat to inflammatory rhetoric about a distant migrant caravan, travel restrictions for Muslims and the “American carnage” of inner cities.

Mr. Trump was on the front lines during the campaign trying to get like-minded Republicans elected. His presence on the trail likely gave a boost the Republican candidates for governor in Florida and Georgia, both white, although their black rivals remained in the running in both states as results were so razor tight.

Michael Steele, the former chairman of the Republican National Committee, said there was no doubt the election made clear how fractured the nation was when it comes to race.

“You’d be a fool to think otherwise,” he said. “What price did the president pay when he said, in reference to Charlottesville, there are good people on both sides? What political price did he pay for the demagogy around the so-called caravan. It does still resonate, and we need to be honest about the fact that there are portions of the American people who still identify with that thinking.”

But that was not the only dynamic at play. In some cases racist scare tactics seemed to energize those who embraced the country’s diversity. That is partly how a slew of black candidates won in predominately white districts.

“These election results make me hopeful that people of all races, backgrounds, genders want to see an elevated conversation that doesn’t delve into, I think, the worst aspect of people, which is the racism, the discrimination, the hate speech,” said Stefanie Brown James, a founder of The Collective PAC, which works around the country to get black candidates elected

Turning out minority residents in majority-white communities was one way that minority candidates were able to win in such districts, political analysts said. That meant less focus on the so-called white swing voter and more on the issues that can turn nonvoters into voters.

On the ground, black candidates said they found themselves balancing their identities with universal messages that were neither black nor white. In addition to Mr. Neguse, other black candidates who won congressional seats for the first time in majority-white districts included Lucy McBath in Georgia, Lauren Underwood in Illinois, Ayanna Pressley in Massachusetts and Colin Allred in Texas.

Other victories, like that of Jahana Hayes of Connecticut and Ilhan Omar of Minnesota, represented slightly different milestones. Ms. Hayes will be the first black woman from Connecticut in Congress and Ms. Omar will be the first Muslim woman, a title she will share with Michigan’s Rashida Tlaib.

Perhaps the most remarkable first for a black lawmaker was not in Congress. In New York, Letitia James became the first black person elected statewide when she won the attorney general’s race.

Only two House Republicans are black — Mia Love of Utah and Will Hurd of Texas. Both remain locked in tight races that have yet to be called.

Finding that part of America that transcends race was part of the trick to the successful runs of several black candidates.

Ms. Hayes, a teacher, said that she had talked to voters in her district about retirement security, neighborhood safety, housing, jobs and a living wage. And because her district in Connecticut included Sandy Hook Elementary, where a gunman massacred 20 children and six adults in 2012, school safety and gun policy were also important talking points, she said.

“It really didn’t matter what their background was or their political affiliation was,” Ms. Hayes said. But with race still a part of the American conscience, candidates sometimes had to lean into it.

In the case of Ms. McBath, whose son Jordan Davis was fatally shot by a white man because he would not lower the music in his car, it was her faith and experience as a mother that held universal appeal. Ms. Omar’s journey to the United States included four years in a Kenyan refugee camp after fleeing Somalia’s long civil war.

Amid discussions with constituents about paid sick leave, child care and student debt, Ms. Omar said her identity as a black woman rarely came up. And when it did, it was like icing on the cake, she said.

Voters “understand it is a bonus that I am an immigrant, a refugee, a woman of color, a black woman, a Muslim woman,” she said. “It allows me to not have too many blind sides in creating policy that will have a positive impact on all of our lives. It is a bonus. It’s not the main deal.”