MIAMI — As the mayor of reliably Democratic Miami-Dade County in Florida, Carlos A. Gimenez, a Republican, was a pragmatist who avoided partisan politics and in 2016 voted for Hillary Clinton. But after President Trump’s election, things started to change.

Six days after the inauguration in 2017, Mr. Gimenez became the first big-city leader in the country to reverse the county’s de facto status as a “sanctuary” for undocumented immigrants. Critics said he had kowtowed to Mr. Trump and turned his back on the county with the second-highest number of immigrants in the nation, after Los Angeles.

This year, Mr. Gimenez received Mr. Trump’s endorsement, spoke at one of his rallies and was elected to Congress.

His remarkable political evolution mirrored a broader shift in Miami-Dade, where 58 percent of the electorate is Hispanic and Mr. Trump made huge inroads from 2016 to 2020. Hundreds of thousands more people voted for him this year, and though he still lost the county to Joseph R. Biden Jr., he improved his margin over 2016 by 22 percentage points, a swing that helped him easily win Florida and sweep a slew of local Republicans into office.

Much has been said about how Latinos in many parts of the country, while still favoring Mr. Biden in large numbers, voted more Republican than in 2016. But South Florida is a unique case study. No other place has quite the same mix of Republican-friendly Hispanics, led by conservative Cuban-Americans. And the Trump presidency has strengthened their hand, forcing Miami to reckon with hard and contradictory truths about immigration, racism and power. 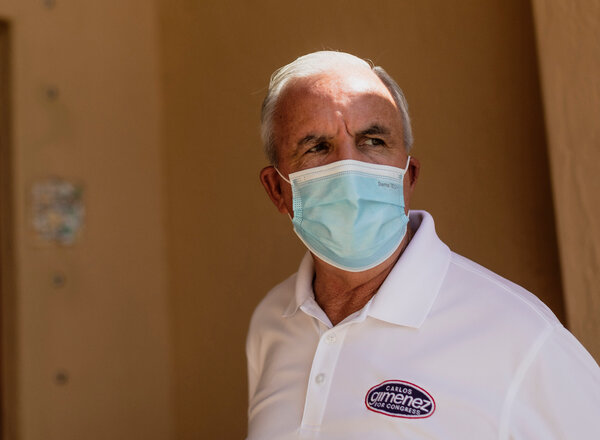 “Miami is a total bubble,” said Michael J. Bustamante, an assistant professor of Latin American history at Florida International University who studies Cuban-American political culture. “You can’t talk about the Latino community or Hispanic community here in the same way perhaps that you talk about it in East L.A. or Chicago or New York or wherever because here, Latinos run the show.”

Mr. Trump’s stunning improvement here shocked not only the nation but also much of Miami, a city that likes to think of itself as the forward-looking capital of Latin America. A waiter or store clerk or Uber driver is more likely to speak to a customer first in Spanish than in English. Every local institution has been shaped by immigrants and their children, who have tended to lean more and more liberal with each passing generation.

And yet many residents have come to the difficult realization that Miami even now is not quite as progressive as they had hoped.

“We used to be more compassionate,” said Carmen Peláez, a Cuban-American playwright and filmmaker who campaigned for Mr. Biden.

Some reckoning took place over the summer, when it became evident that relatively few Latinos, especially Cuban-Americans, were showing up at local protests against police brutality that mirrored others across the nation, causing consternation among more liberal Hispanics.

Then in July, Eliécer Ávila, a Cuban dissident, posted a photograph on Instagram showing himself and other Trump supporters posing in front of Miami shrine to Our Lady of Charity of El Cobre, Cuba’s patron saint, with their middle fingers in the air. (The target of their disrespect was unclear, but the overall message was not.)

In the days leading up to the election, members of the Proud Boys, a group linked to white supremacy, campaigned openly at Miami-area polls, and some of them, including the organization’s chairman, Enrique Tarrio, were Cuban-Americans. Mr. Tarrio was also the Florida state director for a grass-roots campaign group, Latinos for Trump, that was unaffiliated with the campaign.

Nowhere in the country do Hispanics control the levers of power as they do in Miami, and voters do not behave as they might in other places where their ethnic group is more marginalized, Dr. Bustamante said. Traditional “Latino” issues such as immigration, combating racism and identity politics often take a back seat to concerns over the economy, religion and foreign policy.

About 72 percent of registered Republicans in Miami-Dade are Hispanic, many of them Cuban-American. But the Hispanic vote in the region more broadly is a combination of aging Cuban exiles, newer Cuban immigrants and various waves of immigrants from the Spanish-speaking Caribbean and Central and South America. Non-Cuban Hispanics make up about half of the Latino vote in Miami-Dade, and they tend to lean Democratic.

Mr. Trump’s campaign succeeded in South Florida for understanding many of those complexities, as well as for a variety of other reasons: He visited often. Republicans effectively branded Democrats as “socialists.” A vast misinformation campaign targeted Spanish-speaking voters. Mr. Biden failed to reach out to Hispanic voters until it was too late.

It did not help Democrats that, during the summer’s Black Lives Matter protests, some demonstrators in Miami waved flags depicting Che Guevara — a brutal revolutionary despised by Cuban exiles — and defaced a Christopher Columbus statue with graffiti of a Soviet-style sickle and hammer.

“The reality is that the Democratic Party is very far left, and a lot of our people in Miami fled that kind of policy,” said Nelson Diaz, the chairman of the Miami-Dade Republican Party.

In recent years, Cuban exiles and the Republican Party embraced newly arrived Venezuelans fleeing the left-wing presidencies of Hugo Chávez and Nicolás Maduro as their ideological brethren. That reignited a conservative activist fervor that spilled into communities of Colombian and Nicaraguan immigrants.

Even some of the more recent Cuban immigrants who had been derided by many old-guard Cuban-American Republican officials as economic refugees who did not share older exiles’ anti-Communist ideology became Trump voters.

That has proved a source of distress for some Hispanics like Ms. Peláez. She recalled how her Cuban exile grandparents helped Nicaraguan immigrants and subsequent waves of Cuban refugees. Now, she fears the attitude among some Cubans and non-Cubans is to shut the door behind them.

“When Gimenez declared us no longer a sanctuary city,” she said, “it became very much ‘us versus them.’”

Mr. Gimenez chafed at that idea, saying that the county never intended to designate itself as a “sanctuary” and had only stopped complying with federal immigration detention requests to save money. “It was a bad policy,” he said. “We should have never instituted it. We should have been cooperating with ICE.”

In an interview while he was campaigning last month, Mr. Gimenez said endorsing the president did not mean that he would always vote with the Republican Party. His politics, like those of many voters in Miami these days, are based on philosophy, not identity, he said.

“I believe that most of his policies are good for the country,” he said of Mr. Trump. “We had the greatest economy of our lifetimes before the pandemic. It was roaring. We had record-low unemployment. And I support his trade policies. I think that we’ve been taken advantage of, especially by China.”

Mr. Gimenez said his own immigrant experience has informed his politics and steeped him in American patriotism. He recalled his family’s ranch in Cuba, where he rode a speckled gray horse named Cascarita (“Little Peel”) before they left the island when he was 6. He has never gone back.

“I didn’t speak a word of English when I came over here,” he said. “And this country has given me and blessed me with all this opportunity.”

In this month’s Congressional election, Mr. Gimenez defeated Representative Debbie Mucarsel-Powell, a Democrat who immigrated from Ecuador and was caught on video earlier this year marveling at the fact that non-Cuban Democrats had been winning seats in Miami.

“No one thought we’d be able to take the Republican Cuban establishment that has taken ahold of Florida politics for more than 20 years,” she told supporters, in a remark that upset some Cuban Republicans — and proved to be a dramatic miscalculation about the power those voters still wield.

Still, in choosing a new mayor, Miami-Dade voters delivered yet another surprise, in line with the many political contradictions of this complicated city: They elected Daniella Levine Cava. The county’s first female mayor, she is a progressive Democrat who is neither Cuban nor Hispanic.