Home » Americas » How Many People Are Losing Homeowners Insurance Because of Wildfires? 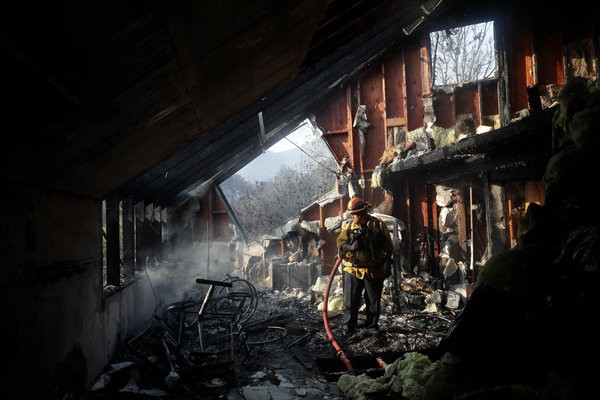 A little while ago, we asked about whether wildfires were affecting your ability to get or keep homeowners insurance. The answer was, in a word, yes.

Dozens of readers from southern Orange County to Lake Tahoe and beyond responded with stories about unrenewed policies and big rate increases.

Katy Hover-Smoot, who said she lives in Squaw Valley, said in an email that her homeowners insurance rate recently jumped to $6,200 per year from $900 per year.

She added that in spite of dropped policies and rate increases, development in the resort area is set to continue.

Mich Mathews Spradlin said in an email that the insurance for her Holmby Hills home skyrocketed to $80,000 per year from $20,000 per year. She said her family was fortunate to be able to afford the cost, but she dreaded to think what the rates must be like for poorer families who lived even closer to last year’s fires.

These aren’t scattered anecdotes. My colleague Christopher Flavelle, who covers climate adaptation, reported that insurers are quietly pulling back from areas where wildfire risk is highest across the Western United States.

That includes much of California.

From 2017 to 2018, the number of non-renewals by insurers in the ZIP codes most affected by damaging wildfires in 2015 and 2017 jumped by 10 percent, a recent report from the California Department of Insurance said.

From 2015 to 2018, the number of new and renewed homeowners insurance policies fell by 8,700 in the 10 counties with the most homes in high risk or very high risk areas.

[Read more about why insurers are dropping homeowners across the West.]

And the risks are only growing, as wildfires become more intense and more frequent — meaning they cause more damage.

It’s a complex issue, but not yet impossible to solve, Jamie Court, president of the nonprofit advocacy organization Consumer Watchdog, told me this week.

Consumer Watchdog sent Mr. Lara an open letter on Tuesday, calling for the commissioner to stop what were described as “excessive rate hikes” or the loss of insurance altogether.

The letter listed steps Mr. Lara could take. Among them: Require insurance companies to prove that rate hikes are justified instead of allowing them to base rates on “black box” risk models that Mr. Court said are not transparent enough.

The letter also called on Mr. Lara to require insurers to guarantee coverage for and give discounts to homeowners who make investments to fireproof their homes.

Mr. Court told me he hopes to see Mr. Lara — who has been criticized for accepting campaign donations from the insurance industry — adopt a tougher stance toward private companies.

“Things will get worse unless the insurance commissioner cracks down,” he said.

A spokesman for Mr. Lara declined to comment on the letter. But he emphasized in an email that the commissioner has been meeting with local leaders in communities affected by wildfires, and has taken steps to improve transparency.

He also noted that the commissioner has taken steps to boost transparency about non-renewals and has pushed to create a statewide standard for home-hardening — or making a house less vulnerable to fire damage — and then forcing insurers to renew or write coverage for homeowners or communities that meet that standard.

And, of course, homeowners, Mr. Lara and other experts agreed that not building in places where homes are likely to burn in the first place should be part of the equation.

In the meantime, Mr. Court and other officials have pointed to the state-backed California FAIR Plan program, which provides a kind of backstop for homeowners dropped by their private insurers.

The problem with the FAIR Plan is it’s more expensive and coverage isn’t as comprehensive.

One reader, John Cressaty, said in an email that he paid close to $2,000 per year for FAIR Plan fire insurance and separate homeowners liability insurance in sparsely populated Alpine County, before he switched to a slightly cheaper private insurer that combined both into one policy.

Then in June, he said, he was told that the company wouldn’t be renewing the policy because of the fire risk.

“So now we are back to the ‘FAIR Plan,’” he said. “Some in our area call it ‘the not-so-fair plan,’ but at least we have coverage.”

Mr. Court said that’s why the state should work to make private insurance more affordable — so the highest-risk properties aren’t all in the same state insurance pool.

We often link to sites that limit access for nonsubscribers. We appreciate your reading Times coverage, but we also encourage you to support local news if you can.

Anthony Levandowski was once a star engineer — a pioneer of self-driving car technology, lured away from Google by Uber. But on Tuesday, he was charged with 33 counts of theft and attempted theft of trade secrets from Google. And while it’s not unusual for Silicon Valley companies to sue former employees, criminal charges are rare. [The New York Times]

“People like Gavin and Kamala, they were always afraid of Tom.” Tom Steyer is a California billionaire who has been a virtual one-man Democratic Super PAC. Now, he’s using his money to fund his own run for president. [The New York Times]

“Instead of dispatching spies to the U.S. to recruit a single target, it’s more efficient to sit behind a computer in China and send out friend requests.” Here’s how China uses LinkedIn to recruit spies abroad. [The New York Times]

Lori Loughlin appeared in court on Tuesday, as questions about whether her daughter — or many of the children of parents charged in the college admissions scandal — would return to U.S.C. [The New York Times]

Also, the College Board, which administers the SAT exam, said it will abandon its “adversity” score following a storm of criticism. [The New York Times]

If we can’t all be professional “produce hunters” like Karen Beverlin, at least we can now get a bit of her wisdom. She spends her days prowling the Santa Monica Farmers’ Market taste-testing some of the world’s finest fruits and vegetables for high-end chefs and other clients.

She shared some tips with The Times here.

California Today goes live at 6:30 a.m. Pacific time weekdays. Tell us what you want to see: [email protected]. Were you forwarded this email? Sign up for California Today here.

Jill Cowan is the California Today correspondent, keeping tabs on the most important things happening in her home state every day. @jillcowan

US trade negotiator dumps the term MOU after Trump objects