WASHINGTON — Within hours of Justice Ruth Bader Ginsburg’s death last month, Senator Mitch McConnell was on the phone with President Trump, assuring him that Senate Republicans would not hesitate to fill the sudden vacancy despite the imminent election.

But he offered a word of warning to the president: “This will be the hardest fight of my life,” Mr. McConnell said, according to an aide. “We have to play this perfectly.”

There was good reason for caution. Mr. McConnell, Republican of Kentucky and the majority leader, had moved just as quickly in 2016 to block President Barack Obama from filling a Supreme Court vacancy nine months before the election, saying voters should decide who selected the next justice. Now, he was proposing to brazenly reverse course and muscle through a nominee who would cement a conservative court majority in the middle of presidential voting and a pandemic that had reached the Senate.

That approach would set in motion the most partisan Supreme Court confirmation in modern history, a sprint that shredded past Senate practice and skirted some arcane rules. It drew outrage from Democrats who called the entire process illegitimate, and set up a tight timetable that could have been derailed by any number of unexpected events.

But on Monday night, as Senator Chuck Schumer of New York, the Democratic leader, denounced the confirmation of Judge Amy Coney Barrett to the Supreme Court as one of the “darkest days” in Senate history, Mr. McConnell sat nearby on the Senate floor, smiling and chuckling to himself with the knowledge that he was minutes from a vote that would fulfill his highest goal.

To Mr. McConnell, Monday was a day for celebration as he achieved what even he could not have imagined four years ago, when he set out to leverage Donald J. Trump’s presidency and his own formidable Senate power to put a deep and enduring conservative imprint on the federal courts. Three Supreme Court justices, 53 appeals court judges and scores of new young conservatives presiding on the district courts: All were delivered under Mr. McConnell’s close supervision and direction.

“I certainly didn’t expect to have three Supreme Court justices,” Mr. McConnell said in an interview on Tuesday as he savored an accomplishment he said had placed him in the top tier of Senate leaders in history. “At the risk of tooting my own horn, look at the majority leaders since L.B.J. and find another one who was able to do something as consequential as this.”

His success could come at a steep cost to Republicans, possibly with the loss of their Senate majority next Tuesday and certainly with a Senate further embittered by the harsh partisanship and hardball tactics Mr. McConnell employed to install Justice Barrett on the court one week before the election. Depending on the results, there could then potentially be a far-reaching restructuring of the Senate and the court itself should Democrats take the White House and Senate and seek to readjust a judiciary that they argue has been unfairly skewed to the right.

Mr. McConnell’s single-minded focus on installing federal judges over pursuing legislative compromise has won him appreciation from a Republican right that has at times distrusted him, but now credits him with erecting a judicial firewall against liberal policies if Democrats gain control of the government.

It has earned him scorn from Democrats, who say he has besmirched the Senate and the Supreme Court with his tactics.

“The majority leader, more than any other actor, has transformed what used to be the overwhelming bipartisan confirmation of a qualified nominee — and a bipartisan ratification of the independence of the judiciary — into an entirely partisan exercise that has destroyed the Senate’s constitutional responsibility to advise and consent and is now at risk of destroying the credibility of the Supreme Court and the lower courts as well,” said Senator Michael Bennet, Democrat of Colorado. 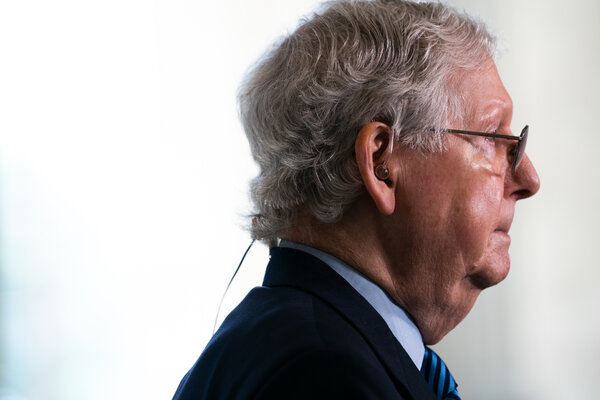 Mr. McConnell said it was Democrats who had wrecked the process. He regularly recites a practiced history that traces Democratic culpability for the judicial wars to Judge Robert Bork’s rejection by the Senate in 1987. Perhaps more important, Mr. McConnell professes to care little about what his foes say as long as he is on the winning side.

“This is a tough business we are all in, and we expect to be criticized,” he said. “The more impact we have, the louder the voices of opposition. It goes with the turf.”

Mr. McConnell’s reshaping of the courts was the result of a strategic plan by a man who became obsessed with the Senate’s role in filling the federal judiciary during his early days as a staff aide during the Nixon administration. While he could not predict that his blockade of Mr. Obama’s 2016 nominee, Judge Merrick B. Garland, would pay political dividends, the vacancy was credited with solidifying conservative support needed to elect Mr. Trump in 2016.

With Mr. Trump headed to the White House, Mr. McConnell immediately began planning with Donald F. McGahn II, the incoming White House counsel, to set up a confirmation assembly line to fill the dozens of lower federal court seats that Mr. McConnell had held vacant in the last two years of the Obama presidency. Republicans changed longstanding Senate practices to speed their work along by denying Democrats procedural tools to block nominees.

“Obviously the president gets a tremendous amount of credit, as he makes the nominations, but one should not underestimate the value Senator McConnell brought to the project,” said Mr. McGahn, who is now in private practice. “It is clear but for him, the president’s success would not have happened.”

The judicial juggernaut appeared to peak in June, when the Senate filled the final opening on a federal circuit court, realizing Mr. McConnell’s goal to “leave no vacancy behind.” But he did not intend to be caught off guard should opportunity present itself for the ultimate prize: a Supreme Court seat.

Before returning to Kentucky in August for the summer recess, Mr. McConnell met with senior advisers to plan for the possibility of a Supreme Court opening, aides said. They had no inside knowledge of Justice Ginsburg’s declining health, but Mr. McConnell wanted to be prepared since his colleagues would be scattered. He quickly decided that any statement should include an explicit guarantee of a vote to fill a vacancy before the end of the year.

Given what happened with Judge Garland in 2016, such a pledge was certain to stoke Democratic outrage and provoke cries of hypocrisy. But Mr. McConnell called colleagues to urge them to reserve judgment on what should be done if a vacancy came up.

Then, at about 7:25 p.m. on Sept. 18, Andrew Ferguson, Mr. McConnell’s chief counsel and a former Supreme Court clerk, informed the senator that he had learned from his court contacts that Justice Ginsburg had died.

“We have to fill it,” Mr. McConnell said immediately. His view was quickly conveyed to Mark Meadows, the White House chief of staff, who was traveling with the president. In less than two hours, Mr. McConnell issued a statement eulogizing Justice Ginsburg and promising a vote to fill her seat, as he had planned.

The next day, Mr. McConnell began a concerted push for Justice Barrett, whom he had seen since the spring as the next nominee and now considered the best candidate to move through on an expedited timeline. Despite White House interest in others, such as Judge Barbara Lagoa in Florida and Judge Allison Jones Rushing in North Carolina, Mr. McConnell was insistent on Justice Barrett, arguing that she was a known figure because of her previous confirmation for the U.S. Court of Appeals for the Seventh Circuit and that she was very popular in conservative legal circles. Mr. McConnell secured a commitment that he would have another chance to make the case for Justice Barrett should the president favor another candidate.

Mr. McConnell wanted a vote before the election because of concern that holding off until after the balloting — while it could potentially energize Republican voters — might also make confirmation more precarious if his party lost the Senate or White House.

“I wanted to make sure we had enough time to fit the average time from nomination to confirmation, so that we could deal with the argument that we were somehow outside the realm of how these nominations have been handled in the past,” he said.

Despite the animus from Democrats and their allies, Mr. McConnell said he did not expect the rushed confirmation to significantly influence the election. And while he said he was worried about potential changes by Democrats in retaliation — such as gutting the filibuster and adding seats to the court — he said they were being contemplated even before Justice Barrett was considered.

“They don’t need any more provocation about what they were threatening to do already,” Mr. McConnell said.

Whatever happens, his mark on the judiciary was, he said, “the single most important accomplishment of my career. I’m proud of it, and I feel good about it.”