Home » Americas » How Santa Plans to Keep Everyone Safe This Year 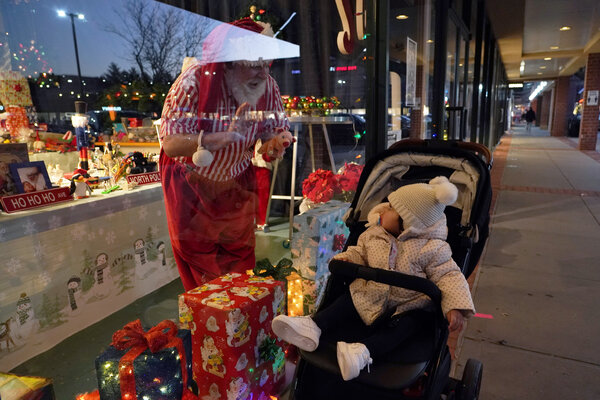 The family photo shoot that took place last month at Picture Perfect Photography in Holtsville, N.Y., looked pretty typical for this time of year: Santa, center stage, was surrounded by fake snow and fake trees, with Christmas lights behind him and two small children in front, one crying, the other not. It was a scene brimming with entrepreneurial hustle and parental striving, not to mention masks, disinfectant, signed Covid-19 waivers and temperature checks.

In other words, the spirit of the season has prevailed and much of the Santa Claus industrial complex has adapted to the pandemic. “Everyone is ready to have some joy, happiness and calm,” said Amanda Demasi, 31, the owner of Picture Perfect. “They want the routine of what they did last year.”

Long before Macy’s canceled its Santaland — a popular experience whose indoor crowds are hard to disassociate from superspreader concerns — Santas, and those who hire or work with them, were brainstorming about making the Christmas season safe.

“In August I put UV lights in my van so I could sanitize my jacket and bought a temperature gun which I covered in Buzz Lightyear stickers,” said Santa Claus, an impersonator formerly known as Frank Pascuzzi who changed his name legally in 2012.

For the past 25 years, Mr. Claus, 62, of Copiague, Long Island, has dressed up as the jolly man in red. (He also designs fire sprinkler systems and runs a catering company, Santa’s BBQ.) This year he has doubled down on safety measures, but with a festive touch. “I ordered Santa masks that look like my face in case I’m with kids and I need to be masked. I’m doing everything I can to prove I’m safe.” 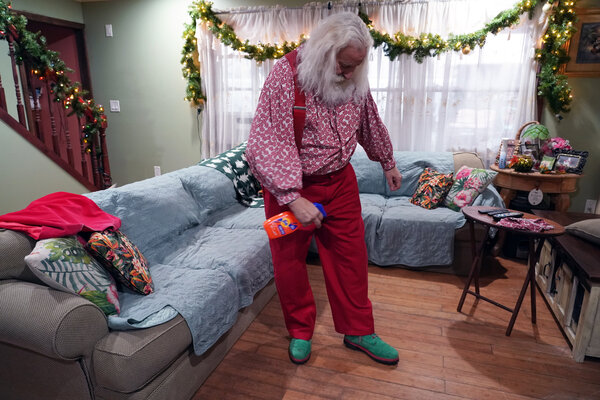 At another photo shoot outside of an apartment in Bayside, Queens, sat Dana Friedman, 61, a trial lawyer and Santa personality who lives in the neighborhood, with Wesley Chang, 18 months.

“We did photos with Santa last year, and Wesley is at an age where he’s just starting to recognize people,” said Tiffany Chang, Wesley’s mother. “It was really important to us to keep the holiday spirit and the Christmas card tradition going.” Ms. Chang, like others, opted to set the photos outside as a safer choice.

Ms. Chang also did her own photography, snapping over 300 pictures on her iPhone. The family ultimately selected an image of Wesley looking up at Santa from a slight distance. “I like this one because it’s a hopeful distance,” she said. “There’s a connection between them, and it mirrors what’s happening in the world right now.”

Mitch Allen runs Hire Santa, an independent staffing contracting company based in Dallas. He works with over 50 Santas in New York and over 1,000 across the country, and recently put in place a safe Santa program.

“We’ve created 6-by-6 acrylic shields with a bench base that we are sending to our retail clients so there’s protection between Santa and the children,” said Mr. Allen, 49. “We’ve extended mall hours and added more days so people can social distance,” he continued, adding that visits will be conducted six feet apart. “No one will be sitting on Santa’s lap.”

Mr. Allen, who is also working with Bloomingdale’s in Manhattan, added that the department store was scaling back for the season. Last year it had two rotating Santas and 10 elves. This year it will be one Santa and one elf. Both Neiman Marcus and Macy’s are offering digital experiences, the safest option.

Mr. Allen predicts that, because of the pandemic, Hire Santa will book over 10,000 virtual Santa appearances, a huge uptick from the 1,000 he had expected. “It’s been a mad scramble,” he said. “People have a deep need to connect this year. We’re seeing an increase in demand for tradition.”

Some Santas, however, are sitting this season out.

“To me, it is not worth endangering a child, their parents, siblings, grandparents,” said Douglas Allen, 64, an engineer who goes by Christopher Kringle for his seasonal gig and lives in northern New Hampshire. “I will miss it, but let us hope it is only this year. I may do some Zoom and Skype, but I won’t be charging for those.”

Not surprisingly, many Santa gigs have substantially quieted down this year. That’s why Mr. Friedman, the lawyer, who usually donates the proceeds from his appearances to charity, decided to try something new.

He converted a vacant store at the Bay Terrace Shopping Center in Bayside into a pop-up Santa’s Workshop, where visitors peering through the window will be able to watch Santa at work and where parents can snap photos of the experience. The space will have a throne for Santa, the requisite fake snow and trees, and piles of wrapped toys for children of low-income families that are earmarked for local hospitals. The space was donated by Cord Meyer, the development company that owns the shopping center, for Santa’s use this weekend and next.

“Children can see my workshop, see me making toys, and take a photo with me, with them outside, standing next to the window,” he said. “And know Santa is still coming.”

Where did it go wrong for Elizabeth Warren?

Biden says he'd leave US embassy in Jerusalem if elected