Home » Americas » How the Illegal Rave Scene Thrives During the Pandemic

On New Year’s Eve, Sam Adeelmirza, the event organizer known as Sam Black, still felt cagey about attending a dance party; he did not want a repeat of the rave he organized under the Kosciuszko Bridge in August. That party was supposed to have been a guerrilla fund-raiser for Legal Aid, but it quickly got out of hand. Hundreds came, and after the second time the police showed up, the event was shut down. Footage of the rave spread to social media, and the beating he took in the press still stung.

Yet Mr. Adeelmirza and his friends welcomed 2021 with no drama and about 150 people at a large warehouse in Brooklyn. There were Covid precautions, and he said he felt safe interacting with just his crew while wearing a mask. “It was very under the radar,” he said. “It didn’t get busted, and there were no pictures.”

“Afterwards,” he added, “I didn’t go see my parents; I waited four to five days and got tested.”

It was one of probably hundreds of parties held that night in New York. In fact, from the worst of last spring, through the hopeful summer and then the return of high Covid-19 infection rates this winter, the city’s underground dance scene never stopped partying.

“We’re communal creatures,” Mr. Adeelmirza said. “At what point is it right for us to give up that part of our humanity?”

In New York City, nightclubs are still officially closed, and private gatherings have been limited to a maximum of 10 people since November. But finding a dance party is fairly simple once you know where to look. First, you need to know who to follow on social media, where organizers and D.J.s post mildly cryptic fliers for events a couple of days in advance. Reach out via direct message, and you’ll get more detailed information. Regulars are notified via email or text blast from an ever-changing set of phone numbers.

Some parties are brazenly listed on Facebook, Instagram, Eventbrite and, until it was recently shut down, the party app Vybe Together. To avoid being caught, social media accounts are regularly wiped or lie dormant before reappearing to announce new events. Inquiring journalists are quickly blocked.

A party’s location is usually given only the day of, and it could be anywhere: a private loft, a warehouse, a basement, a vacant office, even on a boat or a bus. Although many events are held in Manhattan and Brooklyn, an increasing number have moved to New Jersey, where indoor-gathering rules and enforcement are more lax.

When the lockdown last March decimated the dance party business, enterprising D.J.s like Lukas Valo filled the void. “You have to figure out what else to do in order to get money in order to survive,” he said.

Mr. Valo and the recently formed collective Taken NYC found opportunity in the pandemic. Taken has put on at least a dozen parties since coming together in August. “That’s the difference between somebody who wants to be successful and somebody who wants to live in the shadows,” said Mr. Valo, a techno/minimalist house D.J. from Colombia who has been living in New York for three years.

In the rave scene, where the best parties have always been off the grid and on the down-low, attending an illegal event during a pandemic doesn’t seem so radical. But while many ravers are comfortable with a level of illegality, the pandemic tested others’ tolerance.

In October, an organizer associated with Taken hired the D.J. Mickey Perez (known before the pandemic for his long-running Rhythm Section Sundays party at Bembe in Williamsburg, Brooklyn) to play at a “small art gallery opening.” Without a gig for months, Mr. Perez leapt at the chance to make some money. Despite his generally cautious nature, he put on a mask and put his turntables in a cab and headed to Bushwick. 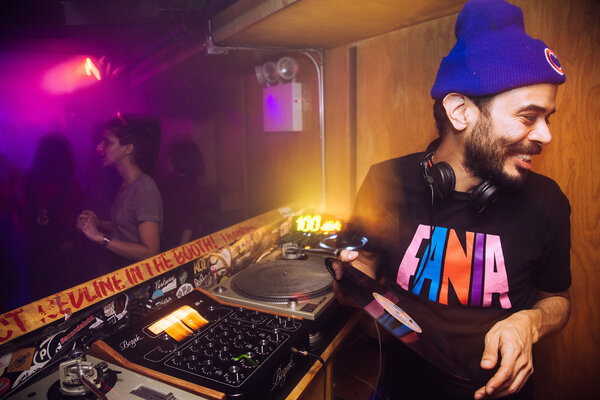 But when Mr. Perez arrived at a nondescript space on a busy section of Troutman Street, he realized he was in for a very different night. People were papering over the windows, and the D.J. booth had been set up in the back corner of a room that would grow crowded with 150 people. Mr. Perez remembers maybe 20 of them wearing masks.

“I’ve got to give them credit, they made it so you can’t tell anything was happening inside,” Mr. Perez recalled. “I went through all these thoughts like, I can’t believe that I’m doing this kind of gig for money now. And here I am, risking my turntables being confiscated by N.Y.P.D..”

Not wanting to be in a crowded room, Mr. Perez waited outside the venue for hours while other D.J.s used his gear. He vowed to never work with the organizers again.

At least 10 groups like Taken operate in the city, some of which formed during the pandemic, though established organizations also host illegal events. Some of these parties, like those organized by Techno BKLYN and The Get Down, pointedly mention temperature checks and masks required “before entry,” perhaps implying a disregard for rules once inside. Instagram videos often show unmasked crowds on crowded dance floors. Mr. Valo said that Taken typically plans to host 20 to 30 people, but it’s rare for anyone to be turned away at the door. Generally, underground parties continue without much fear of being busted.

“Underground parties are not new in New York City,” said Sheriff Joseph Fucito, who, with his 150 deputies, has led the New York Police Department’s enforcement of virus restrictions. During the pandemic, the Sheriff’s Office has prioritized policing large events with multiple health or public safety hazards; the penalties are usually no greater than misdemeanor tickets to D.J.s, venue owners and, occasionally, attendees.

Mr. Valo said that police officers were “very kind” when a Taken party at a SoHo loft was broken up, giving the D.J.s and organizers 30 minutes to stop the music and send everyone home or face fines of $500 per person. “The quicker we get people out of a location, the better,” Sheriff Fucito said.

Kristina Alaniesse, a veteran promoter who has organized raves and other events at warehouses throughout the city, is on a mission to expose illegal raves. These days, Ms. Alaniesse runs a viral Medium account where she posts fliers of illegal raves and calls out D.J.s and organizers for those events. She has upended relationships with friends as a result and has earned the ire of a handful of colleagues.

“I think it’s wrong morally,” she said in early January, the day after a 500-person party was held at a Midtown office. “We’re talking about a deadly virus that closed all the city. So it’s really a choice: What part of history do you want to be remembered in in 100 years?”

In January, Ms. Alaniesse encouraged people in the scene to stop raving for a full year. Today, she’s “hopeful that we’ll be 100 percent open by June and very happy that relief is on its way.”

Mr. Adeelmirza and others take issue with such moral policing. “People are trying to find hope and community wherever they can,” he said. “Yes, it’s not safe, but it’s so crazy out there right now.” Mr. Adeelmirza pointed to essential workers who need release. “Maybe today’s the day they get sick. Who are you to tell them how they spent their last night?”

Illegal raves are hardly the only forms of underground nightlife. Across the city, at unlicensed bars, police officers routinely break up house parties and other events, including D.J. live streams, which can mushroom into de facto parties.

A dozen or so people went to Adrian Patiño’s recent livestream — he spins a mixture of cumbia, salsa and tropical sounds, and streams over Twitch — which was held in a basement in Brooklyn. Mr. Patiño is a graphic designer and D.J. known as Adrian Is Hungry and is part of an artist collective devoted to Latin music.

“I just didn’t find an interesting scene for salsa and cumbia and stuff,” Mr. Patiño said. While it’s hard to justify partying when the virus is still a threat, he understood the draw. In “tropical culture,” he said, “the dancing is so necessary. You take your educated risk.”

When people within Mr. Patiño’s scene contracted Covid, everyone shared information and many got tested. Mr. Patiño said he feels safe because he typically parties with the same circle of fewer than 30 people. He doesn’t think massive events are a good idea. “If you’re hosting something like that,” he said, “I hope that’s not only because you are trying to make a quick buck. I feel that it should be something important, some sort of element that justifies the risk.”

This distinction may be irrelevant once the city reopens. According to Ms. Alaniesse, major dance venues like House of Yes and Public Hotel are “taking notes about who’s playing live right now,” she said, “and they will not be hired again.” Mr. Valo, conversely, believes that those same organizations will be reaching out to groups like Taken that can bring a crowd.

Although nightclubs can reopen at 33 percent capacity as of April 2, with higher limits if they require proof of a negative Covid test, the city entertainment scene will still be a long way from normal. A smaller club, like C’Mon Everybody in Bedford-Stuyvesant or Freddy’s Bar in South Slope, may reopen but will still struggle to stay in business if it’s two-thirds empty. Everyone interviewed for this article anticipates that a general unease with crowds will linger for years, making the return to traditional nightlife even more tenuous.

“Normal is over,” Mr. Adeelmirza said. “This virus is not going away.”

More than 300 charged in deadly assault on US Capitol: Justice Dept official