In exactly four weeks, residents of New York City will cast ballots in a primary election with profound implications for the city’s future.

Those who are registered with a political party will be able to vote for candidates for mayor, comptroller, public advocate, borough president and the City Council. There’s also a competitive Democratic primary to be Manhattan district attorney.

New Yorkers will have to contend with ranked-choice voting for the first time: Instead of casting a single vote for a single candidate in most races, voters will be allowed to choose up to five, ranking them in order of preference.

But before that, they’ll have to make sure they’re registered to vote and that they know where and how to cast their ballots. Among the key dates to remember: the registration deadline is May 28, the deadline to request an absentee ballot online or by mail is June 15, early voting lasts from June 12 to June 20, and Primary Day itself is June 22.

Here are some answers to common questions.

How do I register to vote in New York City?

The deadline to register to vote in next month’s primary is this Friday, May 28. You can check to see if you are already registered on the State Board of Elections website.

If you’re not, there are several ways to register. If you have state-issued identification, like a drivers license or a nondriver identification card, and a Social Security number, you can register online here.

If you don’t have an I.D., you can print this voter registration form, fill it out and mail it to the city Board of Elections, as long as it’s postmarked by May 28. You can also deliver it in person to an elections office.

Or you can use TurboVote, an online service that can help guide you through the registration process.

Am I eligible to vote?

If you’re a United States citizen who has been a New York City resident for at least 30 days and are not currently incarcerated for a felony, you’re eligible to register to vote.

What if I’m not a citizen?

Currently, people who are not citizens cannot vote in municipal elections.

But a bill before the City Council could change that by allowing lawful city residents to cast ballots for candidates running for city offices. Supporters of the measure estimate that it could enfranchise some one million New York City residents.

The push has earned the support of many mayoral candidates. One who initially opposed it, Andrew Yang, expressed skepticism about its legality during a forum this month, but he ultimately came out in favor.

What if I have been convicted of a crime?

The state enacted a law this month automatically restoring voting rights to people convicted of felonies who have been released on parole, part of a nationwide movement to enfranchise formerly incarcerated people.

That means that people who have been released from prison in New York City should be allowed to register and vote. (People released on probation had generally already been allowed to vote.)

Before the law was enacted, Gov. Andrew M. Cuomo had pardoned people on parole to restore their voting rights, but voting rights groups had argued that process was discretionary and confusing.

Misdemeanor convictions do not affect voting eligibility, and people serving time in jail for misdemeanors can still cast ballots.

People who are currently incarcerated for felonies cannot vote. 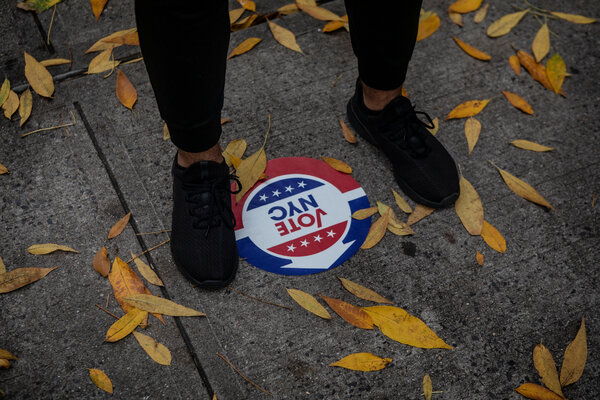 Can I vote early in New York City?

Voters can cast ballots in person during the early voting period, which lasts from June 12 to June 20, or on Primary Day, June 22.