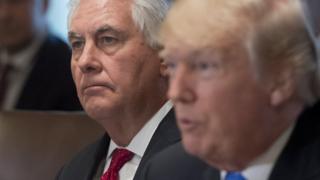 On Thursday night, former Secretary of State Rex Tillerson said in a rare public appearance that he had to repeatedly tell Donald Trump that some of the things the president wanted to do were impossible because they were against the law or violated a treaty.

“I’d say here’s what we can do,” the former Exxon CEO said in a Houston speech. “We can go back to Congress and get this law changed. And if that’s what you want to do, there’s nothing wrong with that.”

Mr Tillerson called the president “a man who is pretty undisciplined, doesn’t like to read, doesn’t read briefing reports, doesn’t like to get into the details of a lot of things, but rather just kind of says, ‘This is what I believe.'”

He also raised some concerns about the state of American political dialogue in the age of social media.

“I will be honest with you, it troubles me that the American people seem to want to know so little about issues, that they are satisfied with a 128 characters,” he said, adding that he didn’t mean that to be a criticism of a president who frequently communicates via social media .

WATCH: Former Secretary of State Rex Tillerson is speaking publicly about what led to his firing in March by President Trump.

The president, needless to say, took it a different way. On Friday afternoon, on his way back to Washington from an event in Missouri, Mr Trump used 270 characters to blast his former cabinet secretary.

“Mike Pompeo is doing a great job, I am very proud of him,” the president tweeted. “His predecessor, Rex Tillerson, didn’t have the mental capacity needed. He was dumb as a rock and I couldn’t get rid of him fast enough. He was lazy as hell. Now it is a whole new ballgame, great spirit at State!”

The president had touted Mr Tillerson as “one of the truly great business leaders of the world” when he selected him (after just one face-to-face meeting) as his first secretary of state in February 2017.

The relationship quickly soured, however. The two clashed on policy in North Korea, Qatar, Iran, Russia, China and the Paris climate accord.

The tensions grew palpable after media reported that Mr Tillerson had called the president an expletive-laced moron – and the secretary had to make a public appearance to emphasise his support for the president (without explicitly denying the reports).

Mr Tillerson’s tenure ended in ignominy 13 months after it began, with a firing via presidential tweet just hours after the secretary returned from an official trip to Africa.

Now Mr Trump is back on Twitter, insulting the intelligence and stamina of the man he selected for one of the highest-ranking positions in his Cabinet.

It’s only the latest example of the president’s penchant for responding to perceived slights with a withering attack of his own. He and his supporters call it “counterpunching”. His critics suggest it’s evidence of a fragile ego or a lack of self-control.

Whatever the explanation, the prospect of working for a mercurial president with a penchant for Twitter taunts could be contributing to the challenges this White House has faced in filling administration vacancies.

Of 706 key positions requiring Senate confirmation tracked by the Washington Post, there are 125 spots that still have no nominee.

When it appeared Deputy Attorney General Rod Rosenstein’s job was in danger, one of his top desires was reportedly to leave in a dignified manner and not by presidential tweet.

The Friday tweet, however, shows that even if you’ve been out the door for more than eight months, the president is still listening – and ready to respond.

No bad word will go unpunished.