Home » Americas » How Would the Mayoral Candidates Get Guns Off New York Streets?

One mayoral candidate, Kathryn Garcia, said that she would let New Yorkers trade in guns for $2,000 in cash.

A third, Maya Wiley, considered one of the more left-leaning candidates in the race, stuck to her message, pledging to appoint a civilian police commissioner.

Following a shooting in Times Square on Saturday that injured three bystanders, including a child and a tourist, nearly all of the leading mayoral candidates used campaign appearances this week to describe how they would reduce crime without discriminating against New Yorkers of color.

The frenzy of barnstorming comes at a potentially pivotal moment in the most important New York mayor’s race in a generation. With just six weeks to go before the Democratic primary, New York is still facing an economic crisis and other fallout from the pandemic. Yet the city’s rising wave of shootings has taken center stage.

It has transformed the race for Manhattan’s chief prosecutor, too, shifting a contest that in January was almost wholly focused on making the criminal justice system more fair.

In recent weeks, some of the former prosecutors in the race have taken pains to emphasize the importance of public safety, and Liz Crotty, the most consistently safety-focused candidate, was endorsed by four different police unions and a former police commissioner, Raymond W. Kelly. Several candidates with non-prosecutorial backgrounds have scrambled to add plans for protecting the public and stemming the violence to their websites.

As of May 2, 463 New Yorkers have fallen victim to shootings, compared with 259 in the same period last year. Mayor Bill de Blasio, who is now in his final year in office, routinely blames the rise in shootings on the mass unemployment wrought by the pandemic, and a coronavirus-related slowdown in court proceedings.

His police commissioner, Dermot F. Shea, has an alternate theory: that the criminal justice reforms recently enacted by the state government make it too hard to jail people suspected of crimes.

Criminologists say that it is difficult to say with any precision what has led to the increase in gun violence, which has risen sharply in cities across the country.

Several experts said that the surge in violence might be related to the pandemic. Richard Berk, a professor of criminology and statistics at the University of Pennsylvania, said that specific Covid-related causes could include the lack of after-school programming and slowdowns in prosecutors’ and courts’ ability to process cases. 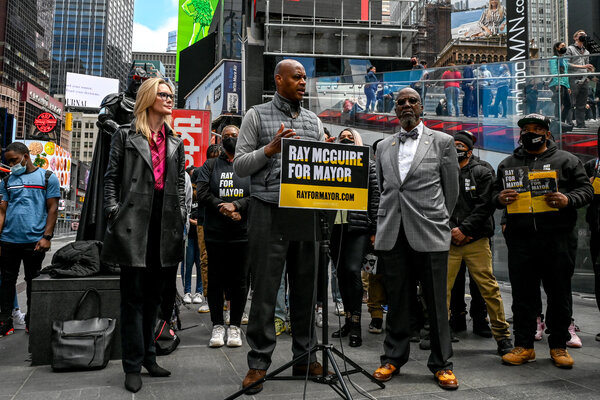 Rather than speculate on the cause for the shootings, the mayoral candidates criticized their opponents for not paying closer attention to the phenomenon.

On Tuesday, Mr. Donovan, a former Obama administration housing secretary, invited reporters to join him in front of the station house for the 73rd Precinct, which includes Brownsville, a neighborhood in Brooklyn that has had 26 shooting victims this year, compared with 12 in the same period last year.

“A tragic shooting in Times Square should not wake candidates up for the first time on this issue,” Mr. Donovan said in an interview, echoing similar comments made earlier this week by Eric Adams, the Brooklyn borough president. “There was a man shot and killed on Church Avenue last week that didn’t get nearly the same amount of attention.”

Mr. Donovan argued that as mayor, he would lean on the city’s five district attorneys, over whom he has no formal control, to fast-track felony gun cases, which he says take twice as long in New York City than in the rest of the state.

Bridging the gap in economic reconciliation in Saskatchewan