[Here is the latest coverage on Hurricane Dorian as heads toward the United States.]

The northern Bahamas were bashed by a hurricane of dreadful power, as severe flooding and winds reaching 180 miles per hour led to the deaths of at least five people and wrecked thousands of homes.

What made the storm so devastating was not only its enormous force — Dorian was a Category 5 hurricane when it landed on Grand Bahama island late Sunday — but also its excruciatingly slow pace. Dorian essentially stalled over the Bahamas, with its torrential downpours and destructive gusts washing over the islands hour after hour.

“We are already hearing from residents that whole towns have been wiped out and devastated,” aid Kevin D. Harris, director general of the Bahamas Information Center.

While the storm has declined in strength to a Category 2 hurricane, it remains a significant threat as it crawls north toward the coasts of Florida, Georgia and the Carolinas, where millions of people are potentially in its path.

Nearly a quarter-million people have evacuated the South Carolina coast, and Dorian on Tuesday afternoon was already lashing parts of Florida with tropical-storm-force winds and drenching rain.

The National Hurricane Center warned in its 5 p.m. update on Tuesday that within the next 36 hours, most of the Southeast coast, from Jupiter in central Florida all the way to Surf City, N.C., faced “a danger of life-threatening inundation, from rising water moving inland from the coastline.”

Widespread Ruin in the Bahamas

Volunteers rescued several families from the rising waters of Hurricane Dorian on Tuesday. 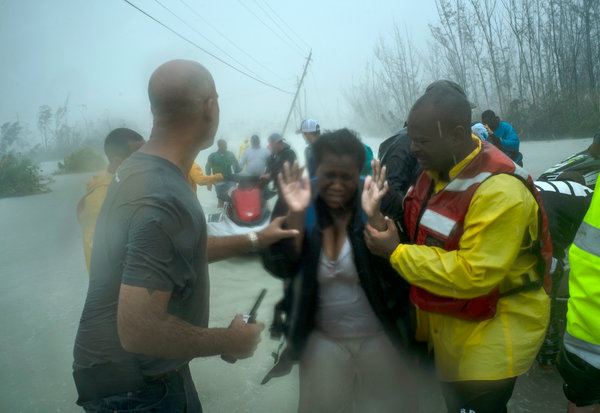 Destruction in the Abaco Islands, on Tuesday.

A submerged road in the Bahamas on Tuesday.

Volunteers in heavy rain and wind in Freeport on Tuesday.

Submerged vehicles in Freeport on Grand Bahama on Tuesday.

The U.S. Prepares for a Still-Powerful Storm

A weakened but sprawling Hurricane Dorian continued its slow-motion approach toward the Florida coast, still posing a major threat to the southeastern United States, where Dorian is expected to roll along the coast for days.

Even if the hurricane’s center does not cross the coastline, powerful winds and rain are all but certain to disrupt life in the region. The storm has grown in size as it has weakened in strength, and its hurricane-force winds were extending outward as far as 60 miles from its center on Tuesday, up from 45 miles on Sunday.

Rain bands and tropical-storm-strength winds pelted Palm Beach County on Tuesday morning. The authorities cautioned that residents should remain indoors throughout the day, and most people appeared to be heeding the advice.

Volunteers in Miami gathered cases of water on Tuesday that are being donated to the relief effort in the Bahamas.

Shadiera Beech and her daughter Sapphire evacuated to a storm shelter in Lake Worth Beach, Fla., on Tuesday.

Children played in a flooded parking lot in Lantana, Fla., on Tuesday.

Evacuees waited to board buses to inland county shelters in Savannah, Ga., on Tuesday.

Residents began evacuating from the coasts of Georgia and the Carolinas on Tuesday. Meteorologists have warned that Dorian would probably bring tornadoes, life-threatening storm surge and dangerous winds along the coasts of the three states into Thursday.

Visitors shielded themselves from the wind in Jacksonville Beach, Fla., on Tuesday.

A woman rested at a shelter in Lake Worth, Fla., on Monday. Shelters opened throughout the region as mandatory evacuation orders were issued.

Residents from a senior assisted living center were evacuated in Kissimmee, Fla., on Sunday.

Mobile homes were outfitted with hurricane shutters in Cape Canaveral, Fla. As of 2017, Florida had about 850,000 mobile homes, more than any other state.

Members of the Florida National Guard prepared their helicopters for potential aviation support and rescue missions at Opa Locka Airport, near Miami, on Monday.

The Florida Army National Guard in Jacksonville on Sunday.

From left, Ryan Alkhatab, Bernardo Craveiro and Will Warren began to evacuate Jacksonville Beach on Monday.

Wesley Campbell, 65, watched as a steady flow of traffic headed west on I-278 as mandatory evacuation orders went into effect for Hilton Head Island, S.C., on Monday.

Lounge chairs and tables were placed in a pool on Monday in Hilton Head, S.C., in preparation for Dorian.

Surfers took advantage of four- to five-foot swells in Hilton Head. The area is under a mandatory evacuation order.

Residents and businesses boarded up windows in Charleston, S.C., on Sunday.

Kevin Rosas, 6, waited for his father, Jose, to buy a generator in Lakeland, Fla.

Samorah Watkins, left, and Benyle Jordan walked in the surf in Miami Beach.

A worker installed plywood over windows in Miami Beach on Saturday.

Motorists throughout Florida filled up vehicles and gas cans in preparation for Dorian’s arrival. Leal Giese stocked up on fuel in Lake Worth.

[Here are some tips on how to prepare for an evacuation order.]

Artwork was prepared for storage to protect it from Hurricane Dorian in West Palm Beach.

Workers boarded up windows of a building in Palm Beach.

[Stay or evacuate? Read more about how Florida residents are weighing their options.]

There were long lines at a supermarket in West Palm Beach on Friday.

A market in Lake Worth was already running low on water.

[What do storm categories mean? Here’s what you need to know.]

At a Home Depot in West Palm Beach, workers loaded a truck with plywood.