Home » Americas » I❤️NY in Crisis: How Do Tourist Shops Survive With No Tourists?

Like many souvenir stores in New York City, Memories of New York in Manhattan is packed with shirts. They bear the logos of the Yankees and select subway lines, images of the Brooklyn Bridge and, of course, the familiar “I ❤️NY” insignia that is a staple of city souvenir shops.

The store’s owner, Alper Tutus, said shirt sales are vital to his business. But since he reopened in August after closing in March because of the city’s coronavirus lockdown, he hasn’t sold a single one.

“Right now, it is absolutely zero sales, nobody’s buying,” said Mr. Tutus, 75, who opened the shop in the Flatiron neighborhood 25 years ago.

Surrounded by New York-themed shot glasses, N.Y.P.D. and F.D.N.Y. caps, and a sea of mugs, postcards and key chains, Mr. Tutus said he recently renewed his lease at $70,000 per month for his 6,000-square-foot shop. But with no real revenue, he has struggled to pay his rent.

For many tourists, no visit to New York is complete without a stop to pick up a T-shirt, cap or any other piece of memorabilia that celebrates the bustling, thriving global destination that the city is — or was, before the pandemic led to travel restrictions.

The rules decimated tourism in one of the country’s most popular big-city destinations and has led to a stark reversal in the surge of visitors to New York in recent years. 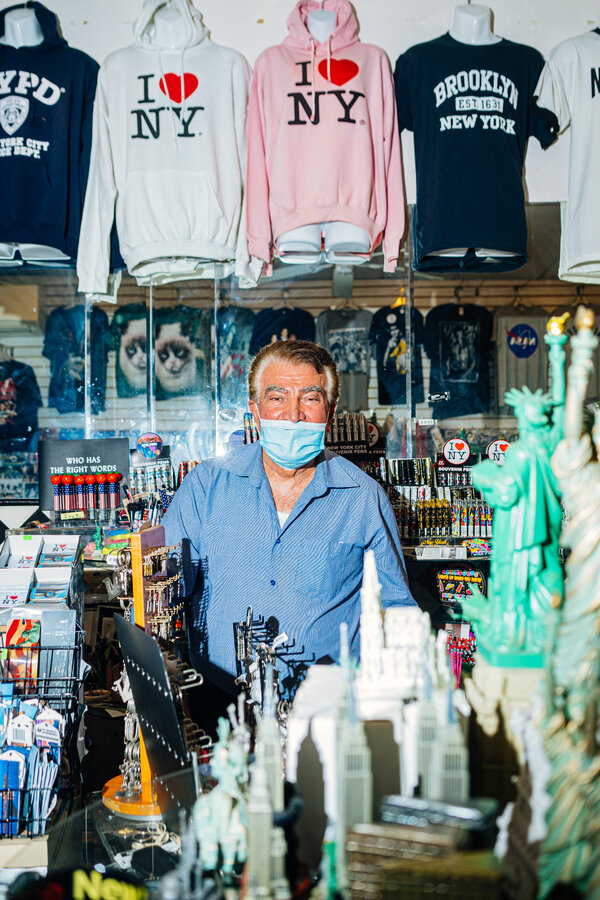 While the city has slowly reopened and some workers have returned to their offices, tourists have still largely stayed away, which means no customers for hundreds of souvenir shops throughout New York that remain glaringly empty of customers.

“It’s bad everywhere in the city, but other businesses like restaurants can still rely on local New Yorkers,” said Eicha Misfa, a manager at the I Love NY shop at Broadway and 38th Street, normally a bustling location near many theaters.

But Broadway theaters, a big reason many visitors come to New York, have been closed since March and are staying shut until at least May 30.

“Our business relies on tourists,” Ms. Misfa said. “We can’t survive without them.”

Or as a salesman at the Park Souvenirs and Gifts shop in Manhattan put it, “How do you sell tourist gifts when there are no tourists?”

Another employee there — neither would give their names because they were not owners or managers — said sales were down 90 percent. The employee was pessimistic that the store, just off Central Park South, could make it through the holiday season “unless a miracle happens.”

At 2 p.m. on a recent weekday, Mr. Syed stood near an array of window displays — from miniatures of the Statue of Liberty and Empire State Building to N.Y.P.D. dog vests — and said he had served two paying customers all day.

“There’s no one to buy anything,” he said, surrounded by an assortment of N.Y.P.D. baby bibs, I Love NY mugs priced at two for $9.99, and NYC baseball caps discounted to three for $10.99.

Midtown Manhattan has the city’s largest concentration of souvenir shops, whose lifeblood are the many tourist attractions in the area, like Rockefeller Center, the Empire State Building and especially Times Square. All of them have seen few visitors since the lockdown.

These days, employees at souvenir shops say they can count daily sales on one hand. They can be seen standing at shop entrances, trying to entice passers-by with discount prices.

At Playland Gifts — one of four souvenir shops on a single block of Seventh Avenue between 48th and 49th Streets — a salesman, Nazmul Islam, 42, stood next to a rack of $7 face masks emblazoned with “NYC” and said he had only two customers that day.

“The only people out here are New Yorkers and they’re not going to buy New York souvenirs,” he said.

At another I Love NY gift shop, on Broadway near 52nd Street, Akm Islam, a salesman, stood near the front door among shelves piled with snow globes of the Manhattan skyline and miniature Statue of Libertys.

“I’ve had customers say, ‘I can’t believe this is Times Square,’” he said, pointing to the empty sidewalks. “Look out there. Times Square is crying. It’s so empty.”

In 2019, New York’s ’s tourism industry marked its tenth consecutive year of growth, with the city welcoming a record 67 million visitors. Before the pandemic struck, the city was projected to do at least as well this year.

This summer, the New York City comptroller’s office estimated that the city would miss out on at least $1.5 billion in taxable tourism sales for the next year.

NYC & Company, the city’s tourism marketing agency, said tourism supports more than 400,000 jobs and accounts for almost $7 billion in state and local taxes. The collapse in tourism has ravaged hotels, restaurants, bars and many retail businesses.

“If you don’t have millions of tourists coming in every week into the city, there’s no way to sustain all of those tourist shops, so I think a lot of them are going to close,” said Nathan Harkrader, chief executive of CitySouvenirs.com and NYCwebstore.com, two online-only souvenir merchants.

The tourist boom allowed store owners to afford high rents by doing large volumes of sales of relatively inexpensive items because of the huge flow of visitors.

In some parts of New York, souvenir shops are as ubiquitous as Starbucks branches, Mr. Harkrader said, a level of saturation that makes it even tougher for shops to survive as tourist numbers drop.

Vendors his company buys from have sent him products they have retrieved from stores that have closed for good, perhaps as many as two dozen, Mr. Harkrader said.

Mr. Harkrader said his business had endured partly because customers who used to live in New York or who simply love the city wanted to purchase items to show sympathy and support for New York.

Other online customers have been would-be visitors whose trips were derailed because of the pandemic, he said. Puzzles have also been popular among people seeking things to fill the time at home.

And unlike brick-and-mortar stores faced with high Manhattan rents, Mr. Harkrader keeps his stock in a warehouse in Robesonia, Penn., where the monthly rent is $2,500.

With the end-of-the-year holidays approaching, souvenir shops would normally be gearing up for one of the busiest periods of the year. But with the virus surging again and many travel restrictions still in place, there is little chance of much holiday cheer.

“For a lot of them, that may have been their last chance to stay on,” Mr. Harkrader said.

“Hope is all we have right now.”