It was 2 p.m. on Tuesday, on what would have normally been a busy weekday as the Thanksgiving holiday neared. Alex Weisman, a stage and television actor, stepped off a train at a subway station on the Upper West Side of Manhattan and was punched twice in the face by a man who fled.

The assault broke Mr. Weisman’s skull in two places and tore one of his retinas.

“There was nothing else I could have done to protect myself,” Mr. Weisman, 33, said on Friday. “I am shaken by this.”

The day after Mr. Weisman was attacked, a man was shoved onto the tracks at the Bryant Park subway station after arguing with a man believed to be a panhandler. On Thursday, a 40-year-old woman was shoved off the platform at the Union Square station by an emotionally disturbed man who appeared to be homeless. She lay between the tracks and avoided serious injuries as a train passed over her.

The trio of violent attacks on the subway is part of a worrying trend: After overall crime on the system dropped significantly during the citywide lockdown this spring, violent crimes, like assaults, started to surge.

There were arrests in the two shoving episodes. None of the attacks were related, the police said.

Now, as the financially battered public transit agency warns of major service cuts and fare hikes if federal aid does not arrive, the increase in crime has stoked fears among riders and complicated the transit agency’s effort to coax people back to the system.

Police and transit officials have cautioned that the system remains overwhelmingly safe and that the crime spike does not come close to resembling the dark days of the 1970s and 1980s, when trains were splashed with graffiti and rampant violence was a source of constant dread for riders.

Still, videos of violent attacks, like those this week, have circulated on social media and shocked riders, many of whom already harbor public health concerns about using public transportation during a pandemic.

“I think people are a lot more short-fused now,” said Sharleen Saunders, 38, as she stood on the platform at the Atlantic Avenue-Barclays station. “And I think they’re acting out when they are upset.”

A video of the attack at Union Square station on Thursday, which was shared widely on Twitter, showed many riders’ worst fear playing out in real time. Moments before a northbound No. 5 train arrived at the station, a man lunged at a woman standing across from him, sending her flying onto the tracks. Seconds later, the incoming train sped over her as another rider held his head and dropped to the floor in disbelief.

The woman, 40, landed in a small space between the tracks that prevented her from being hit by the train’s wheels and avoiding serious injuries, the police said. 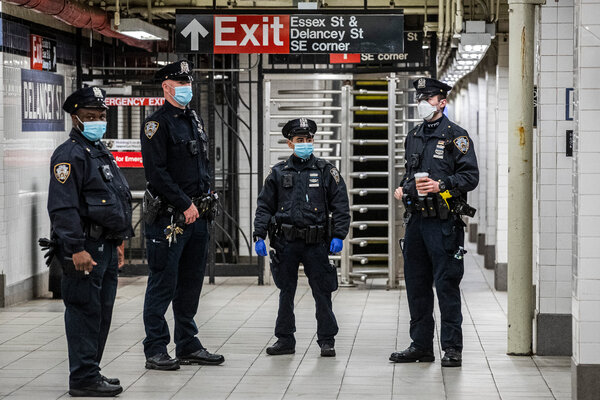 “It was by the grace of God that she sustained only minor injuries,” Kathleen O’Reilly, the transit police chief, told reporters on Thursday. “We see him waiting and calculating when the train comes into the station, and at the opportune moment he pushed her to the tracks.”

The rise in serious crimes is a stark turnabout from the spring, when the citywide shutdown drained the subway of 90 percent of its riders and overall crime in the system plunged.

Police officials attributed that drop off to fewer riders presenting targets for pickpockets and other relatively minor crimes.

But the emptiness in stations may have emboldened people who were looking to commit more serious crimes and who felt more confident doing so with fewer possible witnesses, police officials have said.

“Less riders can certainly give way to certain crimes,” the former transit police chief, Edward Delatorre, said in an interview last month. “A barren station or a shutdown could be inviting for certain crimes.”

The only subway crime that has decreased in 2020 is grand larceny, a trend that may reflect lower ridership. In 2019, the police recorded nearly 1,400 incidents of grand larceny, while as of Sunday only 716 had been recorded.

So far this year, there have also been six homicides, compared with three in the same period last year, and five reports of rape, up from three last year.

Trump's impeachment trial begins as a polarised America looks on