Home » Americas » ‘I constantly get emotional.’ After a year of protests, Minneapolis activists await justice. 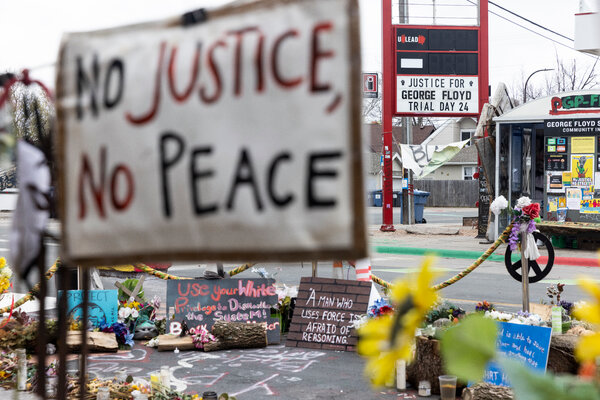 By the time George Floyd died in May, Leslie Redmond was a veteran of protests in Minneapolis. In 2015, she was one of the people who occupied a police precinct for 18 days. In 2020, she was the leader of the local chapter of the N.A.A.C.P., organizing marches and meeting with community leaders.

But even though she is accustomed to standing up for what she believes in, Ms. Redmond said it was difficult to watch the trial of Derek Chauvin, the former police officer who is charged with murdering Mr. Floyd.

“Here we are in 2021, waiting to see if we get justice,” she said, referring to other cases in Minneapolis in which police officers have been acquitted in the death of Black men. “I was exhausted last May. You can only imagine how exhausted I am now. It is unbearable. I constantly get emotional.”

Ms. Redmond, 29, said she was focused on using her new organization, Don’t Complain, Activate, to help heal a community that has been repeatedly traumatized, especially these past few weeks while having to rewatch Mr. Floyd’s death over and over during the trial.

Less-experienced activists, many spurred to act for the first time after Mr. Floyd’s death, are feeling the same exhaustion as Ms. Redmond. In nearby Minnetonka, Minn., Ahlaam Abdulwali, 17, says she has seen little change in her mostly white school district after presenting officials with a 10-page document describing racist experiences in September.

“The murder of George Floyd showed me I can’t depend on others for change,” said Ms. Abdulwali, who is Somali-American and Muslim. “At this point, almost a year later, trying to pressure the school district, and nothing has changed. It’s a disappointment.”

For Rafael Forbush, who founded the Multiracial Jewish Association of Minnesota after Mr. Floyd’s death, the last year has been challenging. At first, larger Jewish organizations rarely responded to calls to discuss the issues of racism and anti-Semitism that Jews of color face, Mr. Forbush, 35, said. Now, almost a year later, they are more receptive. But the feeling of despair sometimes sets in, he says.

“This past week has shown us how tiring, how exhausting this work is, even if we feel we have made progress,” said Mr. Forbush, who identifies himself as half Black. “It makes it so much more difficult, and feels like we haven’t done anything. The last year has been exhausting. Minneapolis being under the international spotlight hasn’t made it easier.”

While downtown Minneapolis, especially near the courthouse, has been heavily fortified during Mr. Chauvin’s trial, with National Guard troops patrolling the streets every night, there have been few protests there this week. Instead, protesters have descended on Brooklyn Center, a suburb where a white police officer fatally shot Daunte Wright, a Black man, on Sunday.

Ms. Redmond said she has prayer and reflection sessions planned for Saturday as part of her new foundation. And if there are calls for protests because of an acquittal, she said she will join them. But for now, she is focused on healing after a year in which Minneapolis has been under the world’s gaze.

Gay and Once Divorced, a Rabbi’s Experiences Help Her Broaden Judaism’s Tent