Home » Americas » ‘I Was Stunned’: Big Gifts to Small Colleges From an Unexpected Source

They came like gifts from a Secret Santa, $20 million here, $40 million there, all to higher education, but not to the elite universities that usually hog all the attention. These donations went to colleges and universities that many people have never heard of, and that tended to serve regional, minority and lower-income students.

On Tuesday, MacKenzie Scott, the world’s 18th-richest person, publicly revealed that she was the one behind the donations to dozens of colleges and universities, part of nearly $4.2 billion she had given to 384 organizations in the last four months.

Ms. Scott, who was formerly married to the Amazon founder Jeff Bezos, the world’s richest person, has pledged to give away most of her wealth. Her shares in Amazon were valued at about $38 billion last year but would have gained value during the coronavirus pandemic.

The money came after weeks or months of hush-hush conversations in which Ms. Scott’s representatives reached out to college presidents to interview them about their missions, several of the presidents said on Wednesday. When they learned who was behind the effort, it was a surprise to them, too. But it could not have come at a better time — when the pandemic was hitting their student bodies hard, they said.

“I was stunned,” Ruth Simmons, president of Prairie View A&M University, a historically Black college in Prairie View, Texas, said of learning that Ms. Scott was giving $50 million, the biggest gift the university had ever received. She thought she had misheard and the caller had to repeat the number: “five-zero.”

Ms. Scott’s latest gifts bring her charity to almost $6 billion this year, an extraordinary amount. In another unorthodox touch, she announced them in a Medium post on Tuesday. “This pandemic has been a wrecking ball in the lives of Americans already struggling,” she wrote. “Economic losses and health outcomes alike have been worse for women, for people of color, and for people living in poverty.”

It is common for billionaire philanthropists to give to Ivy League and elite private schools that are already wealthy and where they often have a personal connection. Such donations support their passions, and also bring prestige and recognition. In recent years, Michael R. Bloomberg gave $1.8 billion to Johns Hopkins, his alma mater, for student financial aid and Stewart and Lynda Resnick gave $750 million to the California Institute of Technology for research into environmental sustainability.

So it was telling to experts on philanthropy to see Ms. Scott associate herself with institutions that were much more humble and, indeed, needy. To these institutions, a $20 million donation was the equivalent of several times that to a Harvard or Yale, and could have a disproportionate impact.

“One of the things that’s so incredible about this massive grouping of gifts is that she does not have a personal connection to most, if any, of these universities,” said Kestrel Linder, chief executive of GiveCampus, a fund-raising platform that works with colleges and universities.

Ms. Scott made gifts to more than a dozen historically Black colleges and universities, as well as community and technical colleges and schools serving Native Americans, women, urban and rural students. 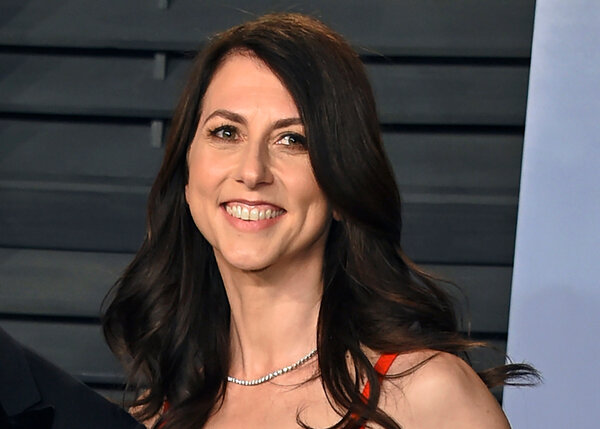 Some of the college presidents said Ms. Scott had put no restrictions on the funds, allowing them to determine how to use them. The funds were delivered to Prairie View on Oct. 20, and Dr. Simmons said she had been permitted to start disbursing money immediately to students affected by the pandemic.

Dr. Simmons said she was initially asked to keep word of the gift confidential, yet argued that making it public knowledge would send an important message.

“I used to be the president of one of those big colleges — Brown University — and there of course, it was quite routine to be in conversations with people about gifts of this size,” Dr. Simmons said. “But it rarely happens in institutions like Prairie View, and it rarely happens especially for the kinds of students that we serve.”

Tony Munroe, president of Borough of Manhattan Community College, a predominantly Black and Hispanic institution in Lower Manhattan, which received $30 million from Ms. Scott, recalled that there was no application to submit for the grant. He was simply contacted out of the blue by a representative of Ms. Scott’s, who engaged him in probing conversations about the college’s mission.