A reservoir in Florida that holds nearly 400 million gallons of wastewater from a former phosphate mine was leaking on Saturday, prompting hundreds of evacuations, the authorities said.

Crews were “doing their best to control the outflow” of contaminated water into a creek at Piney Point in Florida, the site of a former phosphate mine that is south of Tampa, said Vanessa Baugh, the chairwoman of the Manatee County Commission.

The spillage was an “imminent hazard” that posed “an immediate and substantial danger to human health, safety, welfare and the environment,” said Gov. Ron DeSantis, who issued an executive order declaring a state of emergency.

An initial leak in the 79-acre reservoir, which is a part of a system of ponds, was reported on March 26 but the situation deteriorated in recent days.

A sudden, uncontrolled breach could flood homes in the area and upend stacks of phosphogypsum, a waste product of phosphate mining, that hold the ponds.

Workers attempted to fix the breach on Friday by reinforcing the wall of the reservoir but were “unfortunately unsuccessful,” Ms. Baugh said.

Under a state emergency order, the water was being pumped at a rate of 22,000 gallons per minute into Tampa Bay in an effort to alleviate pressure on the reservoir walls.

The water being discharged is seawater — primarily saltwater from a dredging project — “mixed with legacy process water and storm water runoff/rainfall,” according to a website tracking developments with the reservoir.

“The water meets water quality standards for marine waters with the exception of pH, total phosphorus, total nitrogen and total ammonia nitrogen,” the Florida Department of Environmental Protection said. “It is slightly acidic, but not at a level that is expected to be a concern, nor is it expected to be toxic.” 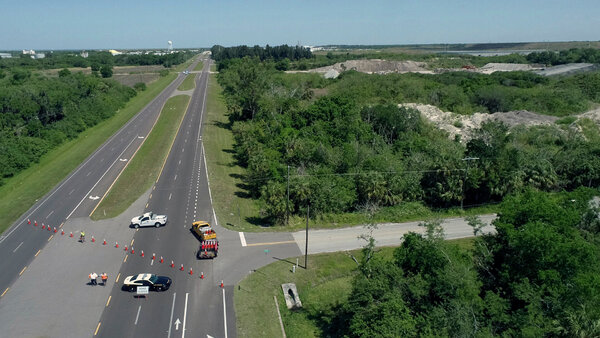 A mandatory evacuation order was issued for 316 homes, the Manatee County Public Safety Department said. The Florida Highway Patrol also shut down sections of US-41 in Manatee and Hillsborough Counties.

The Manatee County jail was in the evacuation zone but was not being evacuated. Randy Warren, a spokesman for the Manatee County Sheriff’s Office, said that relocating inmates and staff members to upper levels of the facility was “our best option right now” and that “sandbags and other precautions were put in place around the jail property.”

Pumps, “vac trucks” and over 100,000 bottles of water have been sent to the area, Jared Moskowitz, the director of the Florida Division of Emergency Management, said on Twitter.

George Kruse, a Manatee County commissioner, said he was with a group of engineers surveying the reservoir when they determined “it was no longer safe to be anywhere near Piney Point.”

“We all kind of raced off the stacks as quick as we could,” he said in a Facebook video.

Speaking about the potential for a large, disastrous breach, he said, “It could be any minute or it could be down the road, or it may not happen.”

“The feeling is that this right here,” he said, pointing at the reservoir in the background, far behind him, “may go sooner rather than later.”

A spokeswoman for the E.P.A., Brandi Jenkins, said agency officials were “closely monitoring the ongoing situation and are in close communication” with local officials.

The phosphate plant was established at Piney Point in 1966 and became inactive in 2001, The Miami Herald reported. The plant has faced other disasters: In 2003, treated wastewater was pumped into the ocean, and in 2011, a breach sent wastewater into a harbor.