As an Army National Guard officer who has deployed all over the world, Capt. Jawana McFadden always felt the Army’s strict rules toward women’s hair needlessly compromised not only who she was as a person, but how she performed as a soldier.

In civilian life, Captain McFadden has what she calls “tons of curls, and big poofy hair that I love.” But for 22 years, when it came time to put on her uniform, she had to use gel and a hot comb to comply with requirements that women have short hair or a tight, disciplined bun.

The bun pushed her helmet forward over her eyes, she said, so that “when you got down in a fighting position, you couldn’t see.”

“It wasn’t just that my self and my traditions weren’t reflected in what it means to be a soldier,” Captain McFadden said in an interview from her home in Inglewood, Calif. “It also just didn’t work.”

In a military increasingly dependent on women, and particularly Black women, that is now changing.

The latest update to the Army’s uniform and grooming regulations, which takes effect on Friday, offers several revisions that give the 127,000 women serving in the Army and National Guard a chance to finally let their hair down — at least a bit.

For the first time, women will be allowed to have buzz cuts. And they will be able to wear combinations of styles, such as locks pulled back in a ponytail, which for years were off limits. The new rules allow short ponytails at all times, and long ponytails in combat and in training when a bun might otherwise interfere with equipment.

“It’s long overdue,” Captain McFadden said of the change. “It shows that the Army is recognizing we can be soldiers and still be ourselves, that being a soldier and a Black woman is valid and valued.” 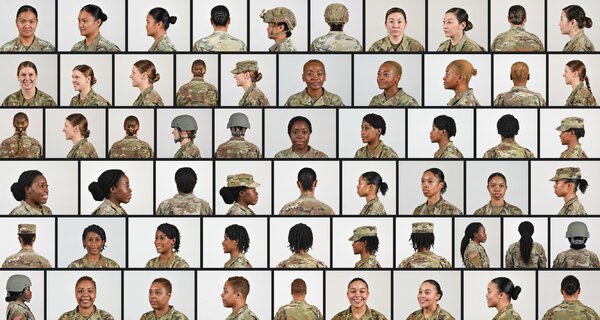 The new regulations are tucked among reams of standards that stipulate everything from who can wear capes (officers only) to whether soldiers can stand with their hands in their pockets (no). While permitting ponytails may seem tepid in the freewheeling world of civilian fashion, for women in uniform the changes offer not only welcome flexibility, but a growing sign that the Army is listening, and slowly moving away from military standards that in the past generally let them serve only to the extent that they agreed to look and act like men.

Women will now also be able to have highlights in their hair and wear conservative shades of lipstick and nail polish, so long as they are not “eccentric, exaggerated, or faddish,” and they can wear stud earrings while not in field training or combat.

And the regulations for the first time include guidance on breastfeeding, allowing soldiers to wear a specifically designed nursing T-shirt under their camouflage coat, and authorizing women to unzip the uniform and, without using a cover, “breastfeed anywhere the soldier and child are otherwise authorized to be.”

The share of women in the military has grown steadily since World War II, though during the early years of integration the all-male leadership kept women in token nursing and secretarial roles, often with their rank and pay capped. Families were considered a breach of regulations. Women who became pregnant in uniform were automatically discharged until 1972, when a young lawyer named Ruth Bader Ginsburg helped take the Defense Department to the Supreme Court.

Since the 1970s the number of women in the Army has grown from about 2 percent to about 15 percent of the force. In recent years, they have integrated into nearly all combat units and been promoted to senior leadership positions.

Today the once-reluctant military is now actively seeking to make serving more attractive to women, said Kate Germano, a retired Marine Corps lieutenant colonel and former head of the Service Women’s Action Network, an advocate for women in uniform, because leaders realize they cannot succeed without them.

“It’s a matter of national defense,” Ms. Germano said. “We just don’t have enough male candidates to do the job.”

The military has developed an especially outsize reliance on Black women, who, Ms. Germano noted, account for nearly a third of all women in the military, even though they make up only about 15 percent of the civilian female population. Black women now serve in the military at a far higher rate than any other demographic group.

“The military offers a lot of opportunities for people we don’t traditionally see as soldiers. They are taking advantage of that,” Ms. Germano said. “And it is slowly reshaping our image of what a soldier is.”

The most recent grooming changes were recommended by a panel of 10 Black women, four white women, one Hispanic woman, one Hispanic man and one Black man drawn from both low- and high-ranking soldiers. They sought input from medical experts who detailed how tight buns sometimes led to hair loss, headaches and other problems that affected soldiers’ well-being and performance.

Though the military in the past resisted accommodations for women, it now recognizes that people from all backgrounds need a voice in what it means to be a soldier, Michael A. Grinston, the sergeant major of the Army, said in an interview this week.

“When I started in the Army, the saying was ‘All I see is green,’” said Sergeant Major Grinston, who joined the Army as an artillery soldier in 1987 and holds the Army’s most senior enlisted position. The saying was a way of expressing that, regardless of sex, race or background, the Army treated all soldiers the same. “Recently, someone told me, ‘When you say that, you don’t see all of me,’” he said. Seeing everyone as identical kept him and other leaders from understanding the unique challenges and contributions of individuals, he added. “That was really powerful.”

The sergeant major, a decorated combat veteran who last summer spoke candidly about his own struggles with growing up as the son of a white mother and a Black father, has been an outspoken champion of inclusion initiatives. He said a broader feeling of belonging makes soldiers perform better and ultimately makes the Army stronger.

“Our goal was to create a Standard that everyone could see themselves in,” he said while announcing the new grooming guidelines in a message on Twitter in January.

When asked if men’s facial hair would be the next frontier, Sergeant Major Grinston laughed and said he received several comments every week from soldiers yearning for beards. The Army currently has authorized about 550 men to grow beards under religious exceptions, but all other facial hair beyond mustaches that are “trimmed, tapered, and tidy” is forbidden.

The sergeant major said beards would probably get serious consideration in the next round of updates. The Army is a learning organization, he added. “Just because we’ve done something for the first hundred years doesn’t mean we have to do it for the next hundred years.”

Why Paying People to Be Vaccinated Could Backfire