Home » Americas » In a Spasm of Violence, Indianapolis Faces Its Third Mass Shooting in 2021

INDIANAPOLIS — He appeared in the parking lot after dark — a hooded figure with a gun who immediately began spraying bullets in every direction.

He stepped into the FedEx warehouse, a place where he had once worked, and continued shooting, “firing into the open,” according to one witness.

He shouted unintelligibly as he fired off round after round, and then, before the police could even arrive, he had killed himself, leaving in his wake eight dead and at least seven wounded.

On Thursday night, in a terrifyingly quick spasm of violence, Indianapolis faced its third mass shooting since the start of the year. And a nation already weary from a pandemic grappled with yet another bloody rampage, only weeks after back-to-back mass shootings last month at spas in the Atlanta area and at a grocery store in Boulder, Colo.

“It is a national embarrassment, what’s going on,” President Biden said in a news conference on Friday, as he repeated his support for a ban on assault weapons. “And it’s not only these mass shootings that are occurring. Every single day, every single day, there’s a mass shooting in the United States if you count all those who are killed out on the streets of our cities and our rural areas. It’s a national embarrassment and must come to an end.”

The mayor of Indianapolis, Joe Hogsett, told reporters of the “scourge of gun violence that has killed far too many” in his city and in the country as a whole. “What we are left with this morning is grief,” he said, “grief for the families of those killed, grief for the employees who have lost their co-workers and grief for the many Americans struggling to understand how tragedies like this continue to occur, again and again.” 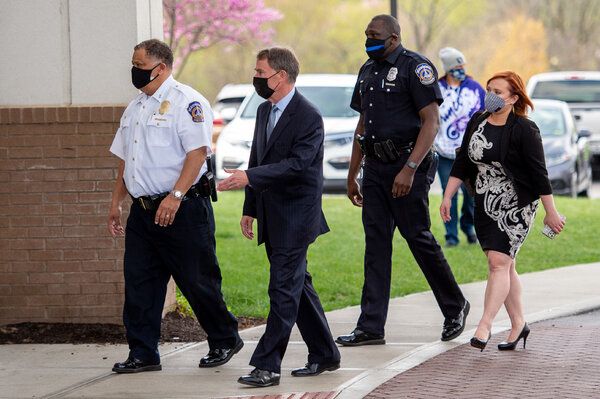 The gunman was identified by law enforcement officials on Friday as Brandon Scott Hole, a 19-year-old who used to work at the warehouse, and who was already on law enforcement radar.

Chief Randal Taylor of the Indianapolis Metropolitan Police Department said he had been told that a large number of Sikh employees worked at the FedEx warehouse, and the Sikh Coalition, a national nonprofit group, said on Twitter that at least four of those killed were members of the city’s Sikh community.

Around 11 p.m., the gunman arrived at the facility, a huge warehouse lined with truck docks sitting a few miles outside of the Indianapolis airport. There were at least 100 people inside around that time, Chief McCartt said. It was a shift change, a pause in the night when some head home and others walk out into the parking lot to smoke, have a bite to eat or listen to music in their cars.

Armed with a rifle, the gunman “got out of his car and pretty quickly started some random shooting,” Chief McCartt said. “There was no confrontation with anyone that was there, there was no disturbance, there was no argument. He just appeared to randomly start shooting.”

Witnesses described sudden chaos and ducking for cover as a man with a rifle appeared at the entrance shouting and firing.

Kamal Jawandha, whose parents were sorters who had been working at the facility on Thursday night, said his mother hid in the bathroom during the rampage. When the shooting was over, his parents saw one of the victims, a person whom they knew, lying dead on the floor.

“She’s in deep sadness,” Mr. Jawandha said of his mother. “She just can’t stop shaking. She can’t believe this kind of thing would happen here.”

Calls began coming into the police from several people at the warehouse who described a barrage of gunfire, the police dispatch turning into an account of growing horror. Officers arrived to find people dead and wounded in the parking lot and inside the building. The gunman was among them.

The chaos within the facility, and in the homes of the employees, was intensified by the fact that many employees did not have cellphones with them.

Jim Masilak, a FedEx spokesman, confirmed on Friday that cellphone access is limited within the warehouse, where packages are sorted for shipping, to minimize distractions. Such policies are common in the industry.

But for family members, not hearing from their loved ones was agonizing.

“From 10 p.m. until 10 a.m. it was a nightmare, a total nightmare,” said Tami Campbell, who was only assured of the survival of her husband, a truck driver at the warehouse, when he called her at the end of his all-night shift. “I called his phone a thousand times even though I knew he wouldn’t have it.”

She joined other families of employees who had gathered early Friday morning at a nearby hotel to wait for news. The mood was tense, with television crews crowded outside and flags that had already been lowered to half-staff. A team of chaplains, the American Red Cross and at least one therapy dog stood by. Mayor Hogsett arrived for a private conversation with the families.

Patricia Holman, the senior chaplain for the Police Department, was one of six chaplains who arrived at the hotel to provide counseling and comfort. She has worked for the city for more than 30 years, first as a police officer, then as a chaplain.

According to Chief McCartt, Mr. Hole, the gunman, last worked at the FedEx warehouse in 2020. The chief said he believed that Mr. Hole had worked there until the fall, but he did not know why his employment ended.

In March 2020, Mr. Hole’s mother had contacted law enforcement to report that he might attempt “suicide by cop,” Paul Keenan, the special agent in charge of the F.B.I.’s Indianapolis office, said in a statement.

The Indianapolis police placed Mr. Hole in a “mental health temporary hold,” Mr. Keenan said, and he was interviewed by F.B.I. agents “based on items observed in the suspect’s bedroom at that time.” They did not find him to be harboring violent racially motivated ideology, Mr. Keenan said, but the authorities did take a shotgun from him, which was never returned.

Mr. Hole’s home sits in a quiet neighborhood of mostly single-story houses on the far east side of Indianapolis. Jeannie McGowan, 65, lives down the street. A few summers ago, she said, she met Mr. Hole at her front door. He told her that his dog had run away and he was going to take her Chihuahua, who was leashed to her front porch.

“You could tell that there was something wrong with him,” Ms. McGowan said. “I told him that I would call the police because that was not his dog.”

After he left, she called her brother who lives across the street from the family. “He said, ‘Jeannie, don’t worry about him,’” she recalled. “‘He’s just not quite right.’”

US House votes to open doors to Hong Kong residents