MEXICO CITY — When U.S. officials agreed to hand back over to Mexico a former defense minister whom they had accused of being on a drug cartel’s payroll, they did it in hopes of salvaging the badly fraying security cooperation between the two countries.

But on Friday that relationship lay in ruins after Mexico exonerated the former official, Gen. Salvador Cienfuegos, without a trial, and accused its American allies of trying to smear him without solid evidence.

Angry American officials saw it as a stunning breach of trust by Mexican officials, who they had expected would thoroughly investigate General Cienfuegos. The Americans said they had sent them copious evidence that linked the general to the cartel when he was returned to Mexico in November.

Within Mexico, critics of President Andrés Manuel López Obrador accused him of caving in to his nation’s military out of political expedience. He has increasingly expanded the security forces’ role in governance, and has heavily relied on them to combat grotesque violence within the country.

In comments after the ruling on General Cienfuegos, President López Obrador questioned the integrity of U.S. investigators, saying they “did not act professionally” and had “fabricated” the allegations against the general.

But security analysts said they were worried that the rushed nature of the ruling could suggest a continuing climate of impunity in Mexico — supported by a president who had staked his legacy on rooting out corruption.

“This is a major slap in the face to American institutions,” said Alejandro Madrazo, a drug policy expert at CIDE, a Mexican university. “It’s evident that the Mexican government is more afraid of its own army than the U.S. government, to which it has been servile.”

Just a few weeks before, relations between law enforcement officials came under immense strain when Mexico passed a law gutting the ability of U.S. drug agents to operate in Mexico. Now, with the release of General Cienfuegos a few days before President-elect Joseph R. Biden Jr. is to take office, the new U.S. administration will face the challenge of trying to rebuild a relationship that has hit a stark low point over drug trafficking.

In recent years, Mr. López Obrador had seemed to find harmony with an initially belligerent Trump administration by bowing down to most of its demands on trade and immigration. In turn, Mr. Trump asked relatively little of Mexico in the way of security and received constant praise from the Mexican leader for acting “with respect for our sovereignty.”

Then in October, without notifying Mexico beforehand, U.S. agents arrested General Cienfuegos after he got off a plane in Los Angeles. General Cienfuegos — who prosecutors said was known as “El Padrino,” the godfather — was accused of taking bribes to work directly for a drug cartel, securing their narcotics shipments and introducing them to other officials willing to accept payment for cooperation. 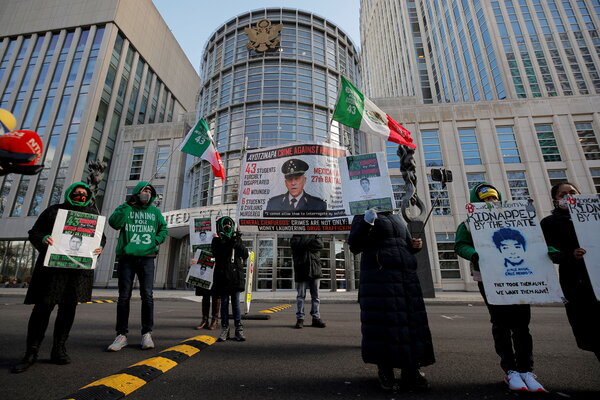 The news landed like a bomb in Mexico, where in a series of high-level meetings, top government officials fumed over being kept in the dark about the arrest. The military was particularly infuriated by the detention of one of its most respected generals, which officials saw as a direct attack on Mexican sovereignty. And they pushed the Mexican government to take action.

In Mr. López Obrador, the country’s generals have found an eager ally. He has made the military a central pillar of efforts to fight violence, and it has been deployed across the country to patrol city streets, track down cartel members and shut down drug labs.

The armed forces have also been endowed with a growing set of civilian responsibilities, including the distribution of the coronavirus vaccine distribution and the construction of a new airport in Mexico’s capital.

As the military’s responsibilities have grown, so have its coffers. While Mr. López Obrador has gutted public funding across the board under a strict policy of fiscal austerity, he has spared the armed forces, increasing defense spending by nearly 40 percent since taking office in 2018. The defense ministry’s budget this year is five times as large as the budgets of the foreign, interior and economy ministries combined.

“The army is the fundamental political actor in the public life of the country,” said Alejandro Hope, a Mexico City security analyst. “Nobody has more weight than the army.”

The Mexican government went all in on the fight over the future of General Cienfuegos, threatening to kick the U.S. Drug Enforcement Administration out of the country unless he was released. In a rare capitulation, former U.S. Attorney General William Barr bowed to the pressure and the general was quickly transferred to Mexico.

At the time, Mexico’s foreign minister, Marcelo Ebrard, suggested that a vigorous domestic investigation of General Cienfuegos had become vital. “It would be almost suicidal” to “do nothing” after getting the Americans to drop charges and return him, he said.

But two months later, Mexico has suddenly cleared the general of all charges. Mexico’s attorney general said in a statement that General Cienfuegos “never had any encounter with the members of the criminal organization” and had never received any “illegal income.”

The Justice Department said in a statement on Friday that the United States “reserves the right to recommence its prosecution of Cienfuegos if the government of Mexico fails to do so.”

American prosecutors had amassed thousands of BlackBerry messages that together suggested General Cienfuegos had set up meetings between military officials and members of the violent H-2 cartel, and had orchestrated operations against rival organized crime groups.

But it was not clear whether General Cienfuegos was ever directly captured on a wiretap sending messages himself, according to two former U.S. officials with direct knowledge of the case and who spoke on condition of anonymity.

The case against him was initially based on informants in the cartel world who had been developed by the F.B.I. But it soon expanded to include the vast wiretap, based in Las Vegas, that implicated General Cienfuegos in federal drug crimes, one of the former officials said, adding that the prosecution had been vetted at each stage of the process by people at the highest levels of the Justice Department.

General Cienfuegos was discussed in BlackBerry messages captured by the wiretap, but he might not have had his own individual tapped device and PIN on the cartel’s communication network, both former officials said.

But any shot at trying General Cienfuegos evaporated this week, devastating the U.S. investigators who had built the case against him.

“There was a tremendous amount of naïveté in sending him back to Mexico,” said one of the former officials, who emphasized that the United States had released the general in an attempt to maintain American law enforcement access to operate within Mexico.

Mending the rupture in what was once a deeply enmeshed security relationship between the U.S. and Mexico will likely figure near the top of President-elect Biden’s foreign policy agenda. Mr. López Obrador is anticipating that the Biden administration will be more likely to intervene in a wider range of policy issues than Mr. Trump, according to two Mexican government officials.

Mexico may have escaped more significant pushback from the United States by passing the law limiting D.E.A. activities in December, when a lame duck Trump administration was consumed with protesting the results of the American election.

Some analysts also raised suspicions about how quickly the government reached a conclusion in General Cienfuegos’s case, suggesting that the impending inauguration of Mr. Biden could have been a prompt to act.

“If they declared the file closed after Biden was in office, the U.S. would have to react,” said Mr. Madrazo, the drug policy expert. “They are hurrying up sweeping the case under the rug.”