Home » Americas » In California, Even Fire-Resistant Trees Need to Be Protected From Flames 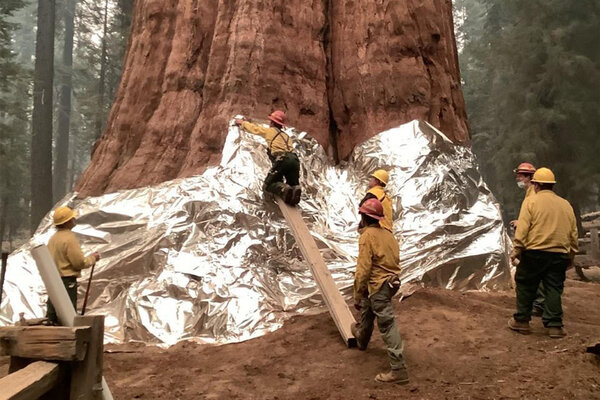 Somewhere between a childhood vacation to Sequoia National Park and a college biology class, I latched on to a single fact about California’s giant sequoias: They’re immune to wildfires.

These ancient trees have survived for so long because they had found a way to coexist with a deadly threat. Or so I thought.

Last summer, a single fire killed tens of thousands of sequoias in the Sierra Nevada. And this month, blazes in and around Sequoia National Park are lapping at the bases of these massive trees, worrying the firefighters who are scrambling to protect them.

The ever-increasing intensity of fires in California has become too much even for the sequoias, which evolved to survive — even thrive — in fires. The dangers prompted firefighters last week to wrap General Sherman, believed to be the largest tree in the world, in flame-retardant foil in a bid to save it from flames.

Experts say the fires that sequoias endured for centuries were mostly low grade. Thick bark and sky-high crowns protected the trees from serious damage. Heat from the flames even helped them reproduce by releasing seeds from their cones.

But now, California’s sequoia groves are dealing with the consequences of a century of fire suppression that has left forests dense with flammable vegetation. Drought and rising temperatures have killed other plants and turned them into kindling.

This has led to fires burning on an unprecedented scale. Between 2015 and 2020, two-thirds of the giant sequoia groves across the Sierra Nevada were scorched in wildfires, compared with a quarter in the previous century, according to the National Park Service.

Sequoias may have adapted to fires, “but not to the confluence of changes that have occurred over the past 100 years,” Joan Dudney, a forest ecologist who has worked in Sequoia National Park, told me.

Last summer, the Castle fire killed off as many as 10,600 large sequoias, or 14 percent of the population, according to the National Park Service. Some of the trees, which grow only in California, were charred from their trunk to their crown.

That has firefighters working to avoid a repeat of last year. They have been clearing brush from the bases of trees and swaddling them in reflective fire-resistant blankets that are also used to protect homes in California.

As of Monday evening, the most well-known trees in Sequoia National Park remained safe, including General Sherman. Firefighters and tree-lovers will nervously wait to see what Tuesday brings.

Read the latest on how the KNP Complex and Windy fires have harmed the sequoias.

Why goats became the unconventional weapon against wildfires.

Listen to Monday’s episode of “The Daily” on the Dixie fire.

If you read one story, make it this

President Biden announced on Monday that his administration would draft rules on workplace dangers from heat, one of the first government responses to an emerging field of research on the harms that workers face from rising temperatures.

Hot conditions on the job contribute not only to more cases of heatstroke and exhaustion, but also injuries from falls and the mishandling of machinery because heat makes it difficult to concentrate.

A study released this summer found that extreme heat caused 20,000 workplace injuries in California each year.

Read the full story from my colleague Coral Davenport.

The rest of the news

Refugee students: Schools in large Afghan communities, like Sacramento and Fremont, are preparing to take in thousands of refugee students from Afghanistan, EdSource reports.

Mega events: As of Monday, Californians attending indoor events with more than 1,000 people must show proof of vaccination or a negative coronavirus test, reports KGTV.

Covid-19 transmission: California is the only state where coronavirus spread is not considered “high” by federal officials, The Los Angeles Times reports.

Activision investigation: The Securities and Exchange Commission has opened an investigation into Activision Blizzard, the video game maker based in Santa Monica that is behind Call of Duty.

Topanga theater: What began as a retreat in the Santa Monica Mountains where blacklisted actors gathered to perform is now the Theatricum Botanicum, and it has been drawing audiences in the pandemic.

Vaccinations for in-home care workers: Los Angeles County’s health officer clarified that in-home health aides are required to be fully vaccinated against Covid-19 by Sept. 30, according to LAist.

George Holliday: The man who filmed the 1991 beating of Rodney King by Los Angeles police officers has died at age 61 of complications from the coronavirus, according to The Los Angeles Times.

Colorado River dispute: The Imperial Irrigation District and the Metropolitan Water District have reached an agreement that settles two lawsuits and aims to protect the Colorado River, The Associated Press reports.

Wonderful: While water prices soar in the Central Valley, Wonderful — a farming company owned by the billionaires Stewart and Lynda Resnick — can always buy more, according to Forbes.

Solar lawsuit: The California Solar and Storage Association has filed a lawsuit against the state over a new requirement that solar panel installers be “certified electricians.”

Spare the Air alert: Higher than normal levels of ozone in the East Bay on Tuesday could cause problems for people with respiratory issues, according to The San Francisco Chronicle.

Homeless shelter lawsuit: A new lawsuit filed in Sacramento Superior Court could affect the city’s plans to build shelters and tiny homes under a freeway. The lawsuit claims the location would make residents susceptible to air pollution, The Sacramento Bee reports.

“A well-preserved ghost town where you feel the miners just left. Peeking in the windows for a glimpse of households sitting stagnant for decades provides great entertainment. Enthusiastic state park rangers give periodic history talks to fill in the blanks.”

Tell us about your favorite places to visit in California. Email your suggestions to [email protected] We’ll be sharing more in upcoming editions of the newsletter.

And before you go, some good news

If you wander into Golden Gate Park today, you may hear the delicate notes of a piano.

Starting in the summer of 2016, a dozen concert pianos have been hidden within the San Francisco Botanical Garden each year. Typically, professionals play for about an hour a day, while anyone else can tap the keys the rest of the time, reports The San Francisco Chronicle.

After a 26-month hiatus because of the coronavirus pandemic, the pianos returned to the park on Friday. They will remain there through today.

Thanks for reading. We’ll be back in your inbox tomorrow. — Soumya

Mariel Wamsley contributed to California Today. You can reach the team at [email protected].

As Canada Awaits a New Group of Refugees, Questions Loom

US lawmakers back bill to support HK protesters