ATLANTA — The impeachment charge that House Democrats have filed against President Trump stems from his role in inciting a mob to attack the U.S. Capitol last week. But included in the resolution is another element of Mr. Trump’s behavior that is also drawing condemnation as an abuse of presidential power: His pressure campaign to persuade Georgia officials to overturn his electoral loss in the state.

Before inspiring a throng of supporters to attack the Capitol, Mr. Trump had previously sought to “subvert and obstruct” the results of his failed re-election effort, a draft article of impeachment released Monday reads, citing in particular the president’s extraordinary intervention in Georgia.

Even if Democrats’ second effort to remove the president from office fails or fades, Mr. Trump’s efforts to subvert the will of Georgia’s voters will continue to resonate, both for the president and for politicians in Georgia. State elections officials continue to face harassment and death threats. A number of Georgia Republicans are now blaming Mr. Trump’s baseless accusations of election fraud for the losses by the state’s two Republican senators this month.

And in Atlanta, the Fulton County district attorney is weighing whether to start a criminal investigation into Mr. Trump for a phone call to Secretary of State Brad Raffensperger, in which the president exhorted him to “find” the votes that would deliver Mr. Trump victory.

That call was part of a much broader push by Mr. Trump and his allies to subvert Georgia’s election results. The effort played out over two months and in the end was based on allegations of fraud that were consistently debunked by his fellow Republicans charged with overseeing the state’s election.

Gabriel Sterling, one of the most outspoken of those officials, said in an interview this week that the president’s effort was both inappropriate and crude.

“There was never an overarching strategy,” Mr. Sterling said, adding: “It was a series of tactical moves in an attempt to get a different outcome here. The president shouldn’t be trying to do things to put his thumb on the scale. I don’t care if it’s a Republican or a Democrat, no president should do that.” 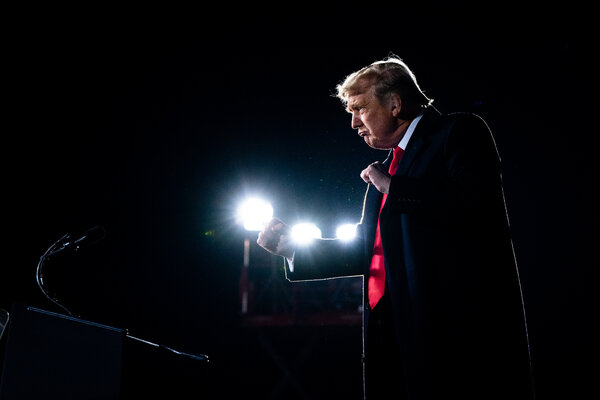 On Nov. 9, the two Republican senators forced into Georgia runoff races, Kelly Loeffler and David Perdue, released a joint statement calling for the resignation of Mr. Raffensperger, a fellow Republican. The senators, who were both Trump loyalists, made hazy allegations that Mr. Raffensperger’s oversight of the election was marred by “mismanagement and lack of transparency.”

An official in the secretary of state’s office, who requested anonymity because of the threats that were still coming in, said the office learned that same day that Mr. Trump was behind the statement; he had warned the two candidates that he would turn his Twitter account against them if they did not publicly call for Mr. Raffensperger to step down.

The state official learned of the threat in a phone call with consultants from one of the two senators’ campaigns.

There had been other, quieter attempts to move Mr. Raffensperger, a Trump supporter and lifelong Republican, more firmly and publicly into Mr. Trump’s camp. In January of last year, he rejected an offer to serve as honorary co-chair of the Trump campaign. He also rebuffed subsequent efforts to get him to publicly endorse the president, according to two state elections officials. The efforts, which Mr. Raffensperger rejected on the grounds that he needed to be seen as impartial, were first reported by ProPublica.

The assault on Mr. Raffensperger and Gov. Brian Kemp, who also is a Republican, came as Mr. Trump watched his chances of victory melt away, with swing states counting mountains of mail-in absentee votes that tilted the race in favor of his Democratic challenger, Joseph R. Biden Jr.

In Georgia, David Shafer, the chair of the state Republican Party, assailed the vote-counting process in Fulton County, which encompasses much of Atlanta. Soon, a succession of Trump allies and aides, some of them much more powerful than Mr. Shafer, began exerting pressure on state officials to overturn the election results.

One of them was Senator Lindsey Graham of South Carolina. He called Mr. Raffensperger later that month, and asked him if he had the power to toss out mail-in votes from some counties, according to Mr. Raffensperger’s account of the call, which Mr. Graham has disputed.

The president unleashed a barrage of tweets baselessly challenging his loss and calling for a special session of the Legislature to consider overturning the results. Conspiracy theories blossomed on the far-right fringes of the internet.

On Dec. 1, Mr. Sterling, in an emotional news conference, implored Mr. Trump to stop claiming that the election had somehow been “rigged” against him.

“Mr. President, you have not condemned these actions or this language,” he said, expressing fury over the threats that election officials and poll workers were receiving. “It has to stop.”

It did not. On Dec. 3, Mr. Trump’s personal lawyer Rudolph Giuliani came to Georgia for a State Senate hearing and made a series of specious claims about voter fraud, even as officials from the secretary of state’s office debunked such claims at a separate hearing taking place just one floor below. The next day, the Trump campaign filed suit in Georgia to try to get the state’s election results overturned and was joined by the state party.

On Dec. 5, Mr. Trump called Mr. Kemp to pressure him to call a special session of the Legislature to overturn Mr. Biden’s victory in the state. Just hours later, the president again criticized Mr. Kemp and Mr. Raffensperger at a rally that was putatively intended to bolster the electoral chances of Ms. Loeffler and Mr. Perdue.

By then, the schism within the party had widened. A senior official in the secretary of state’s office said at the time that the state party needed “to stop passing the buck for failing to deliver Georgia for Trump.”

In the days before Christmas, Mr. Trump called the lead investigator for the Georgia secretary of state’s office, pressing the investigator to “find the fraud,” those with knowledge of the call have said. Around the same time, Mark Meadows, the White House chief of staff, made a surprise visit to Cobb County, with Secret Service agents in tow, to view an audit in process there. (“It smelled of desperation,” Mr. Sterling said in the interview. “It felt stunt-ish.”)

The pressure campaign culminated during a Jan. 2 call by Mr. Trump to Mr. Raffensperger, which was first reported by The Washington Post. “I just want to find 11,780 votes,” Mr. Trump said on the call, during which Mr. Raffensperger and his aides once again dismissed the baseless claims of fraud.

The riot inside the U.S. Capitol on Wednesday, Jan. 6, followed a rally at which President Trump made an inflammatory speech to his supporters, questioning the results of the election. Here’s a look at what happened and at the ongoing fallout:

The Price Tag of Migrant Family Separation: $80 Million and Rising

US asking states to speed vaccine, not hold back 2nd dose