Newer Cuban immigrants who previously had little engagement in American politics have started to identify as Trump Republicans. It could give the president a boost in a critical swing state. 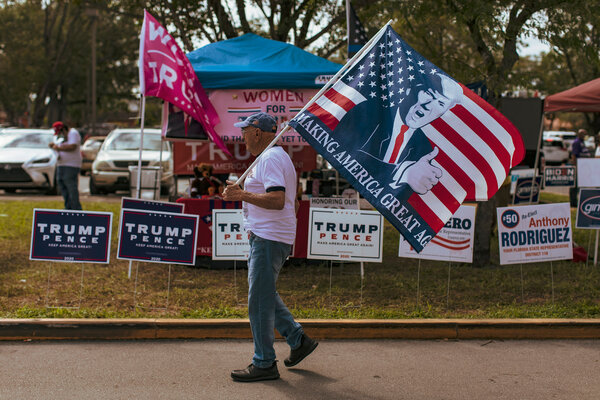 MIAMI — The conventional wisdom about the Florida electorate has long been that Miami-Dade County’s unavoidable political destiny was to turn even more Democratic as younger Cuban-Americans replaced the older Cuban exiles who formed a powerful Republican stronghold.

That fate may not have been as predetermined as everyone once thought.

Second- and third-generation Cuban-Americans born in the United States have continued to drift away from their parents’ and grandparents’ Republican Party. But, in a trend that went largely unnoticed by Democrats until lately, more recent Cuban immigrants who previously displayed little engagement in American politics have started to identify as Trump Republicans.

They are not enough to flip Miami-Dade, which Hillary Clinton won by a record margin of nearly 30 percentage points in 2016. But their potential impact to the race has led in part to an unusually pitched electoral battle in Florida’s most populous county this year, as President Trump’s campaign fights to narrow the Democrats’ lead and compensate for his expected losses elsewhere, including among older voters and suburban women.

If they can bring Joseph R. Biden Jr.’s advantage down to, say, 20 percentage points, the political math suggests that Florida, a must-win state for Mr. Trump, could remain in the president’s column, even if the Tampa and Orlando regions swing slightly toward Mr. Biden.

Narrowing the margins in Miami-Dade would be a “huge win,” said State Senator Manny Díaz Jr., Republican of Hialeah, the most heavily Cuban city in the country. “How do you make that up anywhere else in the state?”

Democrats have watched with alarm as Trump supporters have organized huge caravans that crawl across the streets of Miami-Dade on weekend afternoons, featuring trucks that blare popular Cuban music and fly Trump, Cuban and American flags. Passengers bang pots and pans, a celebratory display typically reserved in this city for Miami Heat championships.

At times, things have become tense. Last weekend, when stragglers from a caravan organized by “Cubanos con Biden,” or Cubans with Biden, intersected with a Trump caravan along Southwest Eighth Street, in the Miami neighborhood of Little Havana, men driving vehicles from the Trump caravan surrounded a Honda Fit decked out in Biden signs.

Democratic-leaning Hispanics make up an increasingly large proportion of Florida’s Latino electorate, including younger Puerto Ricans, Dominicans, Colombians and Venezuelans, and Mr. Biden is counting on them to keep his lead in Miami-Dade to about 24 percentage points. That’s what it was when former President Barack Obama won Florida in 2012.

To that end, Mr. Obama traveled to Miami on Saturday and directly rebutted Republican claims that his former vice president, who has a record as a moderate Democrat, is a socialist, or worse.

No going back: Meghan and Harry will NEVER be able to reverse Megxit pain – fans lash out